From bank robberies to new businesses, 2021 was full of changes and challenges for Socorro County. New chapters began, like the planned interferometer expansion, and old chapters came to an end, like the retirement of municipal judge Francis Cases. Here’s a look back at some of the most pivotal stories the Chieftain told this year. 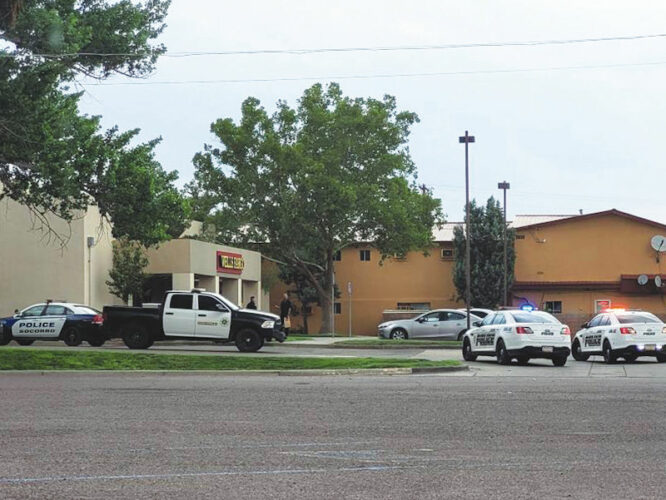 On the afternoon of July 22,  a male described as Hispanic, wearing a dark ball cap with a light-colored brim, a dark mask, a navy blue long-sleeve shirt and black pants entered the Wells Fargo Bank and presented a demand note to a teller, who handed him an undisclosed amount of money. He left the bank and headed northbound. A $5,000 reward was posted by the FBI for information leading to the arrest and conviction of the suspect, who was believed to have robbed five other banks in New Mexico.

And then on October 4, an unidentified man with a facial tattoo and dark brown or reddish beard entered Washington Federal on the Plaza claiming he had a bomb and presented a demand note to a teller. The note said a bomb in a bag he was carrying would explode if the teller did not hand over cash. The teller gave an undisclosed amount of money to the suspect, who left the bag on the counter. The suspect left the bank and ran north down the street. The Plaza was closed to traffic temporarily while the FBI and New Mexico State Police, assisted by the Socorro Police Department, investigated the claim of a bomb. No bomb was found. 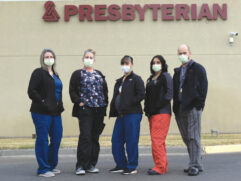 The COVID-19 pandemic continues to shape public life, from mask-wearing to testing to workplace vaccine requirements. In May, the Chieftain interviewed health care workers at Socorro General Hospital, who had been on the front lines of the pandemic for over a year. Nurse Stephanie O’Toole explained the after-work sanitizing routine she followed before she interacted with her family. Staff reflected on the many changes that came to the hospital since the start of the pandemic:  seeing outpatients at the clinic outdoors, shifting guidelines and constant PPE use and the fear of bringing COVID-19 home to loved ones. 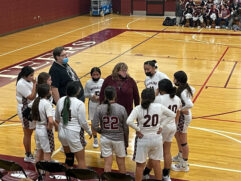 Magdalena Steers girls basketball coach Marleen Greenwood and her young niece were killed in a crash on their way to the Steers Stampede Basketball Tournament in December. After news of the tragedy hit the Magdalena campus that day, Greenwood’s team decided to play in honor of their coach. “She went out as a winner coaching her last game. More importantly, she leaves all of us winners. An example of how to live your life with your eyes on God and your heart full of charity and service to others,” the Steers said in a statement on social media.

In July, the city of Socorro announced it planned to enter a franchise agreement to bring high-speed internet to the city with internet service provider TDS. The company already provides cable service in the city and is committed to investing in infrastructure for fiber. Construction of the fiber network is expected to begin in 2022. According to a broadband survey and strategic plan created for the county and city, Socorro County is the second worst county for broadband access in the state of New Mexico. The county still needs to find a high-speed internet service provider. 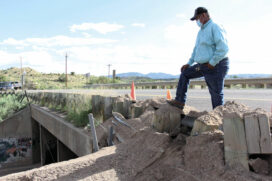 Inspection of a damaged bridge at the Alamo Navajo reservation.

In August, the Alamo Chapter president and vice-president, along with a county commissioner, gave state representatives a tour of their many infrastructure worries: a 50-foot drop next to Highway 169, a damaged retaining wall next to a bridge, bundles of used tires that washed out of an arroyo drainage project and perhaps most pressing, the washed-out Alamo Springs Road. The road, also known as Chavez Road, washed out when the area received five inches of rain within a few hours in 2019. It was repaired in 2020, but a month later washed out again. 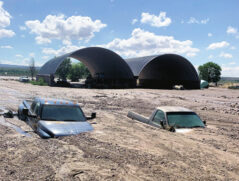 Intense rains in July wreaked havoc across the county.

In July, intense rains caused street flooding and hundreds of thousands of dollars in damage to local farms. Tony Black who lives just north of the city of Socorro, said the tunnel under the interstate near his home flooded, and after the rain the tunnel was filled with sand. Also to the north, the arroyo west of Hope Farms broke, flooding half of the farm, burying cars and vehicles in mud and rocks and damaging crops. To the south near San Antonio, Dave Wade Farms lost the majority of its hay to water damage.

The Environmental Protection Agency on December 17 announced that the Eagle Picher Superfund Site was placed on its High Priority List, and would use a portion of a $1 billion investment from the Bipartisan Infrastructure Law to get serious on a long-awaited clean-up. The major concern of the Eagle Picher site is the underground toxic plume that has been slowly migrating into the north part of Socorro, including the New Mexico Tech golf course. Besides the groundwater contamination, another danger comes from toxic gases rising from the plume, seeping up through the soil and water table. The EPA said more information on the project will be forthcoming. 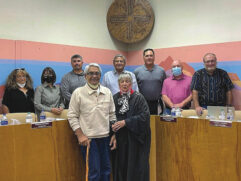 After serving 28 years on the bench, Municipal Court Judge Francis Cases announced her Dec. 1 retirement at the Oct. 5 Socorro City Council meeting. “I’ve had a most interesting, comical, enjoyable and sometimes frightening experience of nearly 28 years,” Cases told the council. She also recounted her eight-year tenure as a city councilor, including two years as mayor pro tem. “I’ve enjoyed my work very much during all of these years and I’m proud that I have run the court without any embarrassment to myself, to the court, to the mayor, to the council members and to the citizens of Socorro,” she said. Cases is succeeded by Joseph E. Gutierrez.

In November, New Mexico Tech was awarded a $30 million cost-reimbursement cooperative agreement for Magdalena Ridge Observatory Interferometer. The contract provides for additional telescope production, the demonstration of fringe tracking, and imagery production of objects in geosynchronous Earth orbit. The funding will support a team of more than 40 scientists, engineers, students and project support staff from New Mexico Tech who will collaborate with the University of Cambridge in the United Kingdom and is in partnership with the Air Force Research Laboratory. When complete, the MROI will be one of the largest Earth-based optical telescopes, made up of an array of 10 collecting mirrors, working together to produce images with resolutions equal to a single telescope more than 900 feet wide. 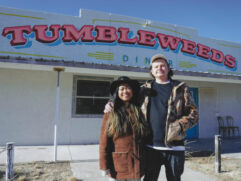 Osiris Navarro and Michal Goila prior to the opening of Tumbleweeds Diner.

A couple who relocated from Seattle announced in January the opening of a new restaurant, Tumbleweeds Diner, in the former Big Bear restaurant on the west end of Magdalena. Osiris Navarro and Michal Goila said they will be offering cuisine to please all palates. Besides New Mexico favorites such as green chile burgers, enchiladas, rotisserie chicken, et al. they said they would also be hosting monthly “pop up” events featuring food from all over the world. On the allure of moving to Magdalena, Osiris said, “People have been really friendly. We integrated quite easily and made a lot of new friends. Your neighbors are always willing to help you if you need anything.” 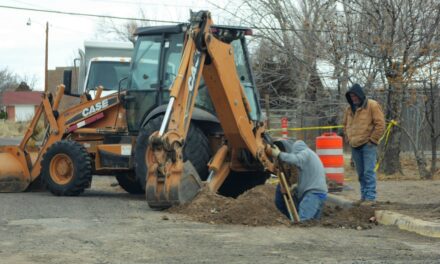 Construction on Bullock Avenue to continue