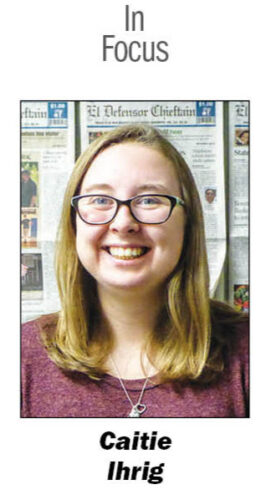 I woke up Sunday morning to there actually being a dusting of snow outside. I couldn’t believe it.

I knew it wouldn’t last long, but still, there was snow.

Nate and I brought Tigger outside and she was just looking at us like, “what is this?” She has only seen snow in Santa Fe and that was also just a dusting that didn’t last long.

Once Tigger figured out that it was something fun to play in, she was running around the yard. Wherever she stepped, the snow was then gone because that’s how little snow there actually was.

She then came to the step where Nate and I were standing and stared at us. Less than 10 seconds later, she was doing sprints around the yard again. After a few minutes of running around, she decided it was time to come inside and warm up.

Monday morning came around and she did not want to get out of her kennel to go outside.

I had no idea it was snowing and it came as a shock when I stepped outside to little snowflakes falling from the sky.

What a fantastic way to start a Monday morning.

I let my car warm up and then headed to work with a smile on my face. It was nice seeing the shiny white snow on the ground – a sign that it was freshly fallen snow.

It’s very pretty until everyone starts driving around and it turns to slush.

Just like Monday morning, I had no idea that it snowed overnight when I woke up Tuesday.

Tigger actually wanted to go outside that morning and it was a shock to both of us to see about three inches of snow covering the backyard. Once she saw that, she just looked at me until I was able to get her out the door. After getting outside, she was walking very cautiously and would keep one paw up in the air sometimes.

I realized very quickly that it was GREAT packing snow and threw a snowball at her… Tigger was not a fan and just stared at me.

I tried to pack a few more snowballs, but without gloves on, my hands started to go numb.

For the few minutes that she was outside, all Tigger wanted to do was eat the snow.

Nate got up soon after and was shocked when I told him there was a few inches instead of just a dusting. He then warmed my car up for me and brushed it off.

He would have cleaned my car off all the way, but the snow brush was lost in the move and that has been one thing that we haven’t been worried about replacing.

We really wished Tuesday morning that we knew where it was as I then had to drive around town with a ton of snow piled on my car.

It’s really not bad driving with that much snow on my car. I’ve definitely driven with more snow on my car and in significantly worse road conditions than what we had here.

Maybe one day we will have enough snow where I could build a snowman or Nate and I could have a snowball fight. It would be fun to see what Tigger would do and if she would jump in the air to try and catch the snowballs.

Last year, Phil, Kelsey and I took a snow day and found a hill in Las Vegas, New Mexico, to go sledding. We did go sledding for a little bit, but it turned into the three of us throwing snowballs at each other.

It would be nice to get that amount of snow here.

Or to even have an ice skating rink close by. This might be the first winter where I haven’t ice skated. Back home, there was a pond behind our house that froze over a few times that we would go ice skating on. One time, the edge wasn’t completely frozen.

Mom went to step onto the pond but didn’t step far enough and her leg fell through. Dad had to pull her out of the pond… I don’t think she went pond skating with us again after that.

My ice skates are in my closet at home and I’m just waiting for the day I can use them again.

Staying in touch via capybara

SEC needs to be held responsible