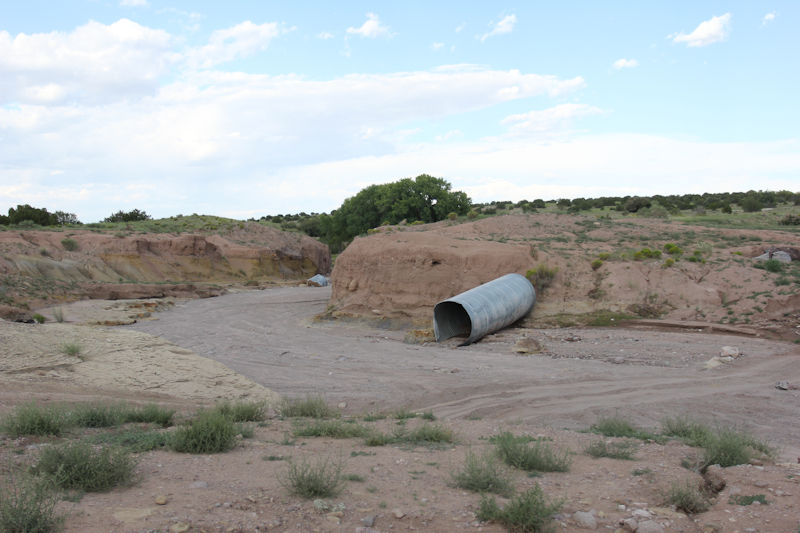 Culverts installed under Alamo Springs Road were washed out by a storm shortly after their installation in the summer of
2020. Repair of the road has been on hold for the past year while a hydrology study is completed so that whatever repairs
are made can endure future storms.
Cathy Cook | El Defensor Chieftain photos

A road that serves as the primary school bus route in Alamo has been in dire condition for over a year. Alamo is also dealing with other road and drainage issues, including bundles of tires that have washed out of an arroyo and are scattered across the area.

In 2019 Alamo Springs Road, also known as Chavez Road, washed out when the area received five inches of rain within a few hours. It was repaired by Socorro County’s Road Department for $390,000 in June 2020. By July 2020, the road was washed out again. A section of the dirt road crossing the arroyo has been without a drainage structure for over a year, since the second washout.  The two metal culverts that washed out along with the road are sitting in the arroyo.

Alamo Springs Road is a main school bus route for students in Alamo, but this summer the low lying dirt section of the road has been washed out in every heavy rain, said Chapter President Virgil Sandoval. For three to four days after a washout the road is not passable, until county road graders or the Alamo school board’s road grader can regrade the road, said Sandoval. With the school semester beginning this could pose a serious transportation issue. Approximately 90 families live on the side of the road past the washout, said Chapter Vice President JJ Apachito. The alternative route the school bus can take adds 40 minutes to the bus route.

For the last year, the section of the road that washes out has only been eight feet wide, and every time there is a rainstorm, it gets washed out again, said Sandoval. While this has caused transportation issues, those issues could become more pressing with some in person school resuming this August.

The road has recently been widened by a county road grader, but lacks any drainage structures. At present the county road department maintains 1,400 miles of road with a staff of eight. The department is trying to hire two more employees, but operators often leave after they acquire their CDL for higher paying jobs. County operators start at $11 an hour. 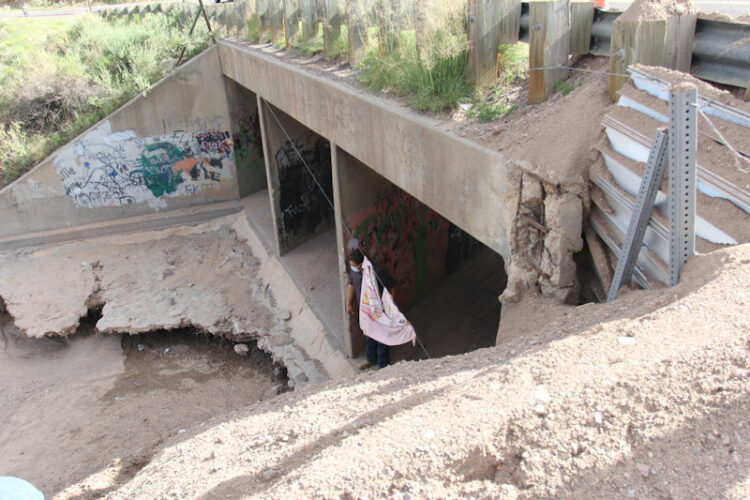 The New Mexico Department of Transportation used a highway sign as a temporary repair for this Highway 169 bridge. According to an NMDOT spokesperson, a permanent fix will be made after the monsoon season ends.
Cathy Cook | El Defensor Chieftain

“A lot of people get frustrated. They call us up, they say when are we getting out there, and we just have to put them on the list. I don’t blame them for being frustrated,” said Gonzales.

The damaged culverts can be seen farther down the arroyo. Apachito said community members have asked if they can clean up the culverts and turn them in as scrap metal. He’s advised them not to. He’s not sure if the county administration will want the damaged structures at some point and he doesn’t want anyone to get in trouble for taking them.

When Alamo Springs Road first washed out in 2019, the county issued a disaster declaration and tried to get the road back in the state it had been prior to the washout. It quickly washed out again. Since the road washed out again in the same location, the county is filing under a repetitive disaster site, so that a new design for the road, one that won’t wash out again, can be built.

Typically the county would have six months to repair the road back to pre-disaster state. By treating it as a repetitive disaster the county can seek more mitigation funding to create something that is able to withstand the severe floods in that location, said Tripp.

“The army corps will do this analysis for free, which saves the county a large sum of money because if we’d hired an engineer to do it, the time and money would have been cost prohibitive,” said Tripp. “It’s really hard to get all these things pulled together and have the money at the same time.”

In July, the Socorro County commissioners approved getting Dennis Engineering to use the hydrology study and determine the best type of structure to place on the road to accommodate the storm flows.

“I think all of us already understand it needs concrete culverts, because the last time we recorded five inches of rain in an hour, so there’s no structure that could sustain that without being wiped out other than something that’s fantastically solidified,” said County Manager Michael Hawkes.

The county commissioners are requesting $1.8 million in the county’s Infrastructure Capital Improvement Plan from the state legislature to fund rebuilding the road.

While Alamo residents are waiting on the road repairs, the county is waiting on state reimbursement for the cost of the already completed, and washed out, 2020 repairs. Tripp said she’s submitted the paperwork to recover funding for prior damage to recovery officers with the New Mexico Department of Homeland Security and Emergency Management three times without ever getting feedback, because of staff turnover within that office. Each time someone leaves the recovery officer position and is replaced, the new employee requests she resubmit the paperwork. To Tripp’s knowledge, the paperwork has not been reviewed yet. 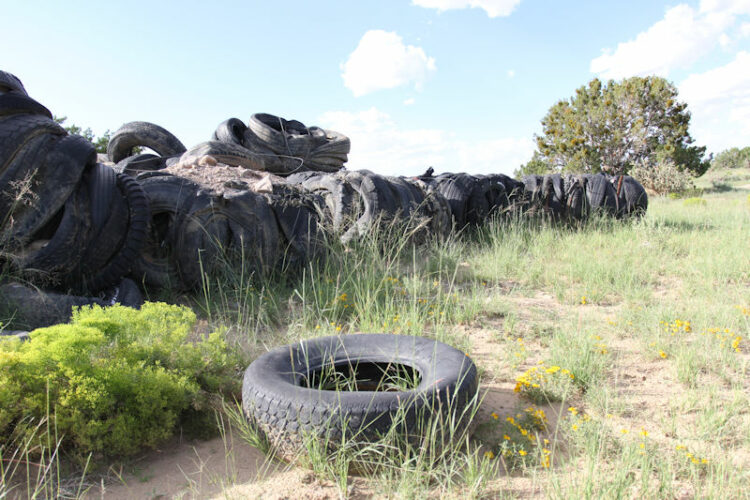 Bundles of used tires were installed by the Socorro County Road Department in 2019 for erosion control in an arroyo in Alamo. The tire bundles are washing out of the arroyo, leaving used tires strewn throughout the area

The Alamo community is also dealing with debris from an arroyo drainage project completed by the county in 2019. The Socorro County Road Department installed bales of used tires wrapped in wire in the Pipe Springs arroyo as riprap, to help manage erosion and drainage. Many of the tire bales have washed out of the arroyo, leaving used tires all over the reservation.

Gonzales said his department was told they could use the tire bundles as long as the wire didn’t rust, but the year the bundles were installed was 2019, the same year Alamo Springs Road washed out from heavy storms. The tires were installed in September of that year, said Gonzales and began washing out shortly after installation in heavy monsoon rains.

He does not think the department will attempt to use tire bundles for riprap again and thinks the bundles are more appropriate for smaller arroyos.

Gonzales said his department is waiting on the go ahead from the county emergency management office to clean up the tires. Tripp said she is not familiar with the tire bundles, as project worksheets related to Pipe Springs were submitted to the NM Department of Homeland Security and Emergency Management before she became emergency manager in 2020. Tripp said she is waiting on responses from DHSEM about disaster projects from 2018 and 2019. She does not know for certain if that state agency has all the paperwork and documentation needed to move forward with mitigation.

Chapter officials are also concerned about maintaining Highway 169, which runs all the way through Alamo.

NMDOT does not treat the highway to prevent it from becoming icy in the winter. The crew that works on Highway 169 stops at the reservation line and turns around.

The office told chapter officials that the chapter previously passed a resolution to not allow NMDOT to do that work in Alamo, said Sandoval. Sandoval and Apachito want to change the resolution, but despite instructing their staff to search it out, they cannot find a copy of the resolution.

“That roadway belongs to the Navajo Nation and we’re not allowed to go in there and do it,” said Ami Evans, NMDOT Public Information Officer for District 1. “We’ve been working with management in there to try to get that taken care of.”

Sandoval and Apachito are also worried about the state of a bridge on Highway 169 shortly before the turn off for the Chapter House, health center and general store.

For the last five months, instead of a new retaining wall, a highway road sign has been wired in place behind the guardrail as extra reinforcement, said Sandoval. After every rain NMDOT delivers a new pile of sand next to the bridge. Without a retaining wall the sand will likely wash away in the next rain. Apachito said they are concerned this could undermine the integrity of the bridge.

Evans said the box culvert at the bridge has wings. Due to a heavy storm one of the wing walls was under washed, which caused it to collapse. She confirmed that the sign was put there as a temporary fix, one approved by the bridge engineer. Evans said the wing wall repairs will be made as soon as monsoon season ends—she believes within a month or two, if not sooner.

“The roadway is stable and there’s no issues with the roadway,” said Evans.

Chapter officials are also concerned about a 50 foot drop next to Highway 169 shortly after mile marker 30. Rain has washed out land next to the highway within a few feet of the road. County Commissioner Secatero said he’s concerned someone could be injured at the drop off. The culvert that runs beneath this section of highway appears to have been damaged when a phone line was bored.

In early August, Sandoval, Apachito and Secatero took state representatives Josh Sanchez and Harry Garcia on a tour of the infrastructure issues they were concerned with.

Sanchez said the state saw a similar culvert issue in Belen when a fiber optic line was bored too close to a culvert, damaging it. Eventually the malfunctioning drainage structure caused a sinkhole that had to be repaired, he said.

Sanchez recommended the chapter officials pick one major project for the county and one for the state that they want to prioritize getting help and funding for right away, and then request assistance with the other issues next year. Sanchez and Garcia said they would help track down the missing resolution and help coordinate meetings with other government bodies to address the infrastructure issues.