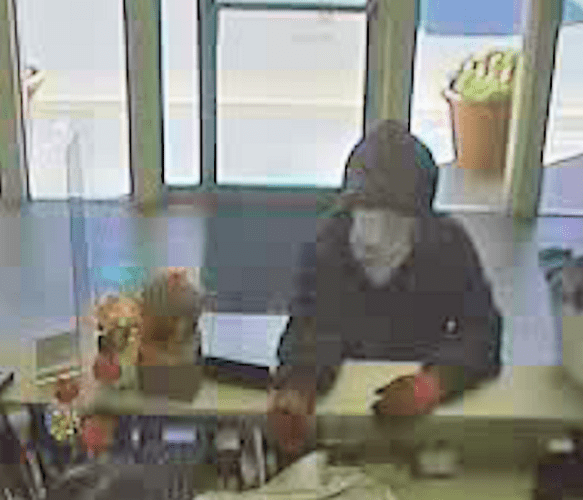 Screen capture of the suspect demanding money at the teller’s window from WaFd’s security camera.
Photos courtesy of FBI

Washington Federal Bank, 201 Plaza, was the scene of a bank robbery Monday morning. This marks the second bank robbery in Socorro in less than three months. It was in July that Wells Fargo was hit. That suspect is suspected to be the person responsible for multiple bank robberies and is listed as still at large.

According to a communication from the FBI’s Albuquerque office, an unidentified man with a facial tattoo and dark brown or reddish beard entered Washington Federal on the Plaza claiming he had a bomb.

The robbery occurred at approximately 11:25 a.m.

The Plaza was closed to traffic temporarily while the FBI and New Mexico State Police, assisted by the Socorro Police Department, conducted an investigation into the claim of a bomb. 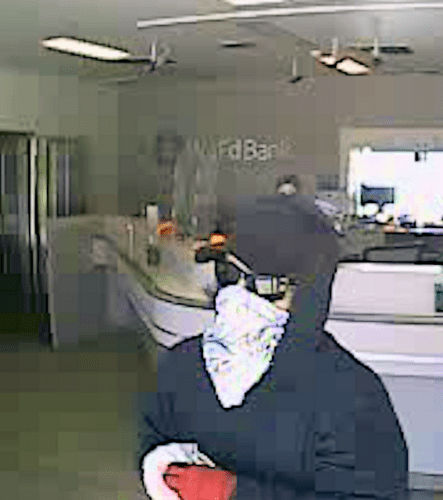 Screen capture of the suspect walking to the exit.

The suspect is described as a Hispanic or black male in his late 20s to early 30s, approximately 5’6″ tall, with a medium build. He had a tattoo of teardrops or stars next to his left eye and had a long, dark brown or reddish beard.

The suspect, who wore a dark baggy, hooded sweatshirt, sunglasses, a white bandana mask, dark pants, and red gloves entered the bank and presented a demand note to a teller.

The note said a bomb in a bag he was carrying would explode if the teller did not hand over cash.

The teller gave an undisclosed amount of money to the suspect, who left the bag on the counter. The suspect left the bank and ran north down the street.

A New Mexico State Police bomb team responded to the scene and determined the bag did not contain an explosive device.

The Socorro Police Department is assisting with this investigation.

In the wake of the robbery, Mayor Ravi Bhasker decided to close City Hall and to reschedule the Monday night city council meeting to Wednesday at 6 p.m.

Anyone with information about this robbery is asked to contact the FBI at 505-889-1300.

Tips can also be submitted online at tips.fbi.gov.

Information about other bank robbers wanted by the FBI can be found at bankrobbers.fbi.gov. 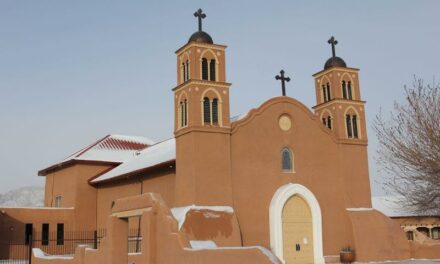 Children under 12 eligible to receive vaccine