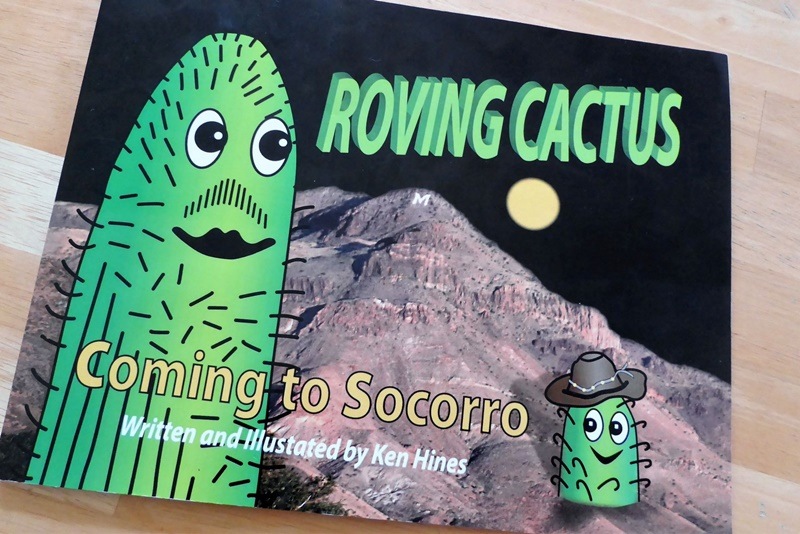 The just-published children’s book by Ken Hines. The author said he wrote the richly illustrated book which features several familiar locations in Socorro and Socorro County.

It’s hard not to notice the stylized cactus mural facing First State Bank’s parking lot. The boldly painted cacti are eye-catching on their own, but there is a back story to the characters.

According to muralist Ken Hines, the two cacti are named Barrel Bob and Fishhook and their story has finally come to light in the just-published children’s book, Roving Cactus – Coming to Socorro.

Written and illustrated by Hines, the story is a playful look at how a visitor to Socorro might go about seeing the sights. And sites.

“I thought it would be kind of fun,” Hines said. “There are not many books about Socorro, other than history books. Nothing like this anyway. It’s for the kids.”

The cactus figures in the mural facing First State’s parking lot were taken from Hines’ first book, Searching For an Oasis, published in 2018.

“That was actually from my first book,” Hines said. “I had done another book, one I had done 30 years ago and never got it published.”

He said when First State’s President and CEO Cuatro Bursum mentioned to him he wanted a mural on that wall he had an idea.

“He said, why don’t you take that picture out of your book, and put that up there?” Hines said. “I’m thinking, OK, I could use the money from that to get my book published from Sunstone Press up in Santa Fe.”

That’s how his first book got published. 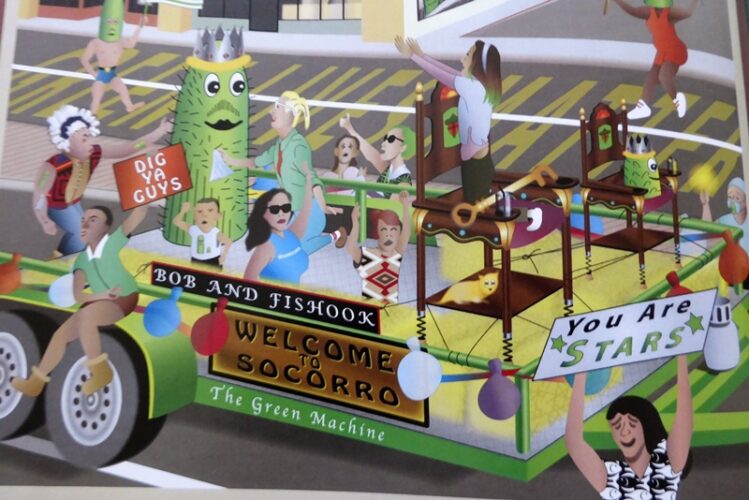 The two protagonists, Barrel Bob and Fish Hook, are grand marshals in a special parade down California Street in the book Roving Cactus – Coming To Socorro, published by Lulu Press.

“This new book, Roving Cactus – Coming to Socorro, is written with young people in mind,” he said. “I thought it’d be kind of fun. It’s the story of the two cacti, Barrel Bob and Fish Hook, who decided to leave California and end up wanting to live in New Mexico. It’s for the kids. And Socorro. That’s the bottom line.”

Gracing every page facing the narrative are artistic depictions of familiar locations in Socorro and Socorro County.

“Kids love pictures,” Hines said. “The plaza, the VLA, San Miguel Church, Bosque del Apache. I wanted the football team in there and I wanted the fiestas in there.

“I had to figure out how they were going to get around. They were roving cactus and didn’t have any roots so they could rove around,” he said. “They wanted to become famous. After they became famous they go to sleep in the park, and it’s left open in the end.”

He started working on it before the pandemic

“It kept me busy all during the pandemic,” he said. “It kept me in the house and I worked on it all through that.”

He said he wanted to do it for Socorro, not to sell books on Amazon.

“It’s not on Amazon because I did it for Socorro,” Hines said. “I didn’t do it for the world or make a ton of money off it. It’s not about the money you know.

Hines is originally from Joliet, Illinois, and attended Joliet Junior College where he studied art, won numerous awards for his work, and was featured in a one-man exhibition.

Hines moved to San Diego in his 30s, where he attended the University of California-San Diego and earned his degree in Graphic Arts. One of the courses he took was called Illustrating for Children’s Books.

In 2008 he moved to Socorro, New Mexico to escape the hustle and bustle of big city life and be near family.

“My brother was in the Army and stationed at White Sands and then he retired here,” Hines said. “He said come to Socorro. And I said, ‘Socorro?’ I came here and gave it a try and said shoot, I love this place. I’m gonna be here till I die.”

Since then, he has become one of Socorro’s finest local artists. He has painted numerous murals around town and restored several “wall ads” on some of the city’s most famous historic buildings.

“I did the Owl Cigar sign, about eight or nine years ago,” he said. “And Bull Durham on the other side of the building. 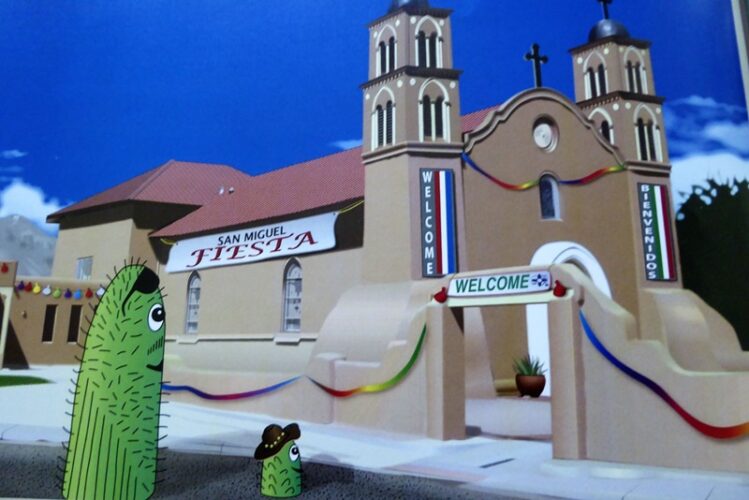 Barrel Bob and Fishook stop at San Miguel Church while touring the town.

“I always wanted to do that Owl Cigar sign. It was all beat up and not done right when somebody re-did and the O was crooked. The owl looked like a hawk,” Hines said. “So I researched it and found one. It was in Iowa or Pennsylvania, I forget, and almost exactly like that.”

He put the image in Photoshop to make the proportions exactly the same.

“I did like 60 percent overlay and stuck it on top of the other one, and then printed it out so I could see exactly where the mistakes were made, and simply used the bricks as a grid.”

Scraping the old paint off was the tough part.

“And then I did Action Gas on Spring Street,” he said. “It wasn’t too long ago I did one across from the fire station.”

His most interesting mural is one for Bodega Burger.

“I did their sign on the building, but there’s another one inside,” Hines said. “If you’ve ever peeked in the bar area, look at the ceiling. I painted the Northern Lights on the ceiling, which is kind of fun. Nobody notices it because it’s the ceiling.”

He is first to point out that painting murals takes time.

“It can take up to five months to paint them things,” Hines said. “Up and down scaffoldin. In the heat …  very heavy-duty jobs. All by myself. I don’t have any helpers or anything.

“But when that scaffolding is all tore down and I stand back and look at it and say you know what, I did that,” he said. “All by myself. It’s there and it’ll be there for a while, hopefully. There’s a real sense of accomplishment.”

Published on June 20, Roving Cactus – Coming To Socorro may be purchased on lulu-com. A limited number of copies are at Socorro Public Library. 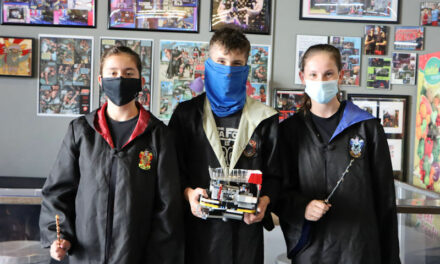 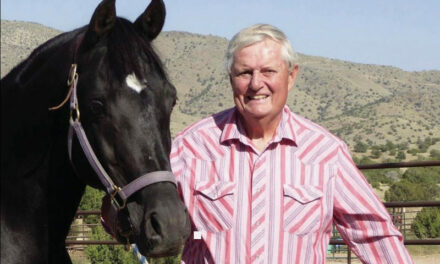 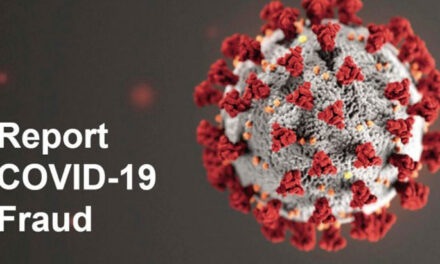