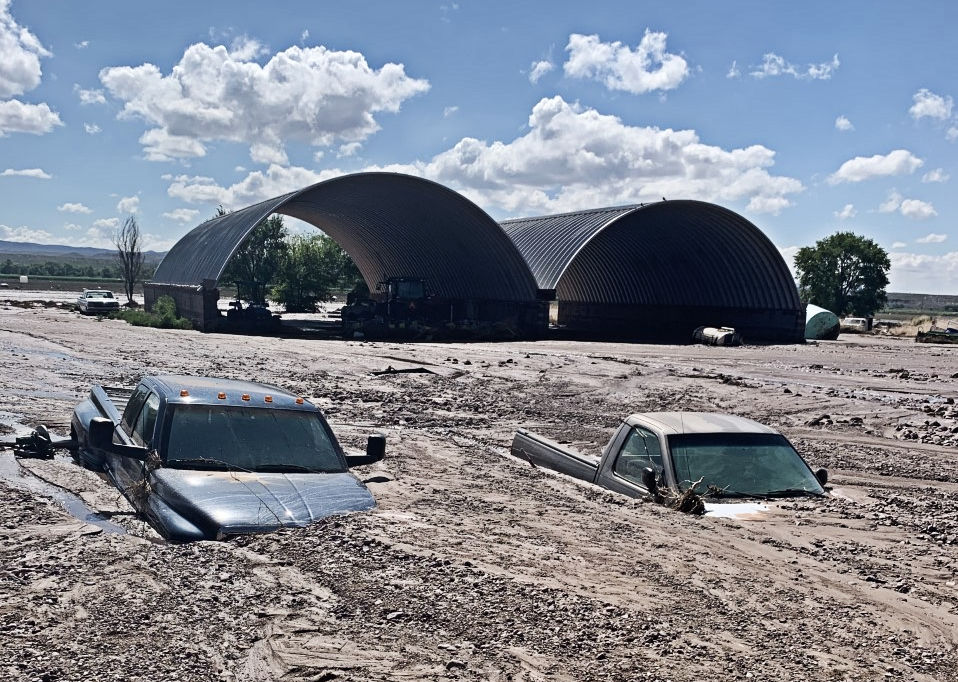 Multiple vehicles at Hope Farms in Socorro were buried in mud and rocks as a result of the rainstorms. As of Friday, three of the five trucks were dug out.
Photos courtesy of Dale Jones

Ron Jones and his son Dale Jones lease Hope Farms and own Jones’ Dairy which is located north of Socorro.

“We lost a lot of money in crops, a lot of equipment and some cars and vehicles were buried in the mud and rocks during the flood,” Dale Jones said. “It’s going to be a pretty devastating loss for us.” 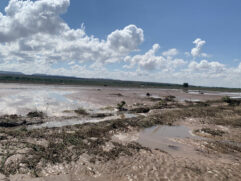 Hope Farms flooded due to the recent rain. Multiple crops were lost, equipment was damaged and vehicles were destroyed because of the flooding.

According to Jones, they lost several hundred thousand dollars due to the loss of crops and vehicles. He said the cleanup is going to be very expensive, but isn’t sure how much that will cost them as they are still sorting through everything and getting the vehicles dug out.

Five pickup trucks were buried in mud and rocks up to the windows and by Friday only three of the trucks were dug out due to how deep they were buried.

Jones said the trucks and other vehicles that were buried are completely ruined.

Their swather and baler were also buried and those will be salvageable, but will have to be replaced.

For Jones, the biggest loss is the crops. They lost a good portion of their oak hay and several fields where corn was planted were drowned out.

“The fields that got drowned, there is a lot of dirt and debris in them and there will be an extensive cleanup just to repair those fields,” Jones said.

The corn fields are essential to Hope Farm as those crops are used to feed the cows at the dairy farm.

“It’s going to be a big impact because now without those crops, we won’t have enough seed for the year to feed the dairy cows,” he said.

The dairy was already struggling due to COVID-19 and Jones said that if they are unable to get disaster relief help that it will be hard for them to recover.

“Pretty disappointing, devastating actually,” he said. “That was definitely tough finding that out.” 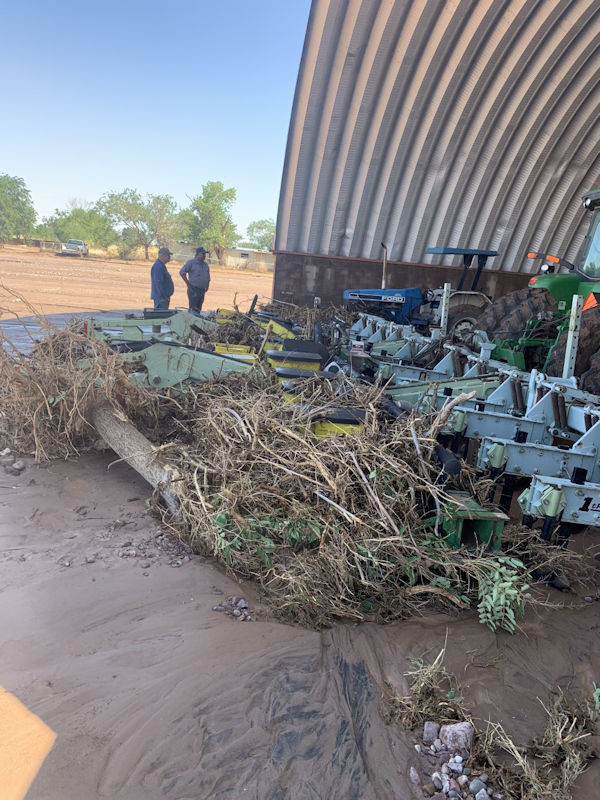 Ron Jones and a worker at Hope Farms inspect the damage that was caused by the recent rainstorms.

They have since applied for both state and federal assistance and have also talked to the Farm Service Agency to see what is available to help with the cleanup.

“Honestly, we probably, because I’m a third generation dairy farmer and we’ve been in the business for over 50 years, if we can’t get help, it might put us out of business,” Jones said. “I think that it will.”

Glen Duggins, who owns Five Star Chile in Lemitar and is on the Middle Rio Grande Conservancy District Board, is working with Yvette Herrell and Gail Armstrong to see what relief can be provided to the local farmers.

“They are very sympathetic, very heartbroken,” Duggins said. “They want to do something for the people. The will to do it is there, there are just laws that forbid. We are still going to try. We are searching.”

According to Duggins, the bar is very high in order for the county to be declared a catastrophe where FEMA would come in to provide relief.

“Even though some of these farms were completely destroyed, it might not rise to the point where we can get it into FEMA and that’s sad,” he said. “They look at the population and they look at a lot of things. It’s sad. It’s sad, but we are trying. In the county, we are going to try and do what we can, but it’s pretty hard.”

Dave Wade who owns Dave Wade Farms Incorporated near San Antonio and Duggins both lost tens of thousands of dollars in damage from the flooding.

Duggins said his farm has been struggling the past three years due to hail in 2019, COVID-19 in 2020 and two extreme weather conditions in 2021.

“I’ve never thought more about leaving in my life,” he said. I love it. I’ve been 37 years. I wanted to be a farmer all my life… It’s been very good to us, but it’s been very disappointing and heartbreaking lately.”

The farming season this year started with an extreme drought which led Duggins to transplanting 300,000 chile plants so they could start growing on time.

Duggins said he was unable to get water early enough in the season which led to not having their first cut of hay. 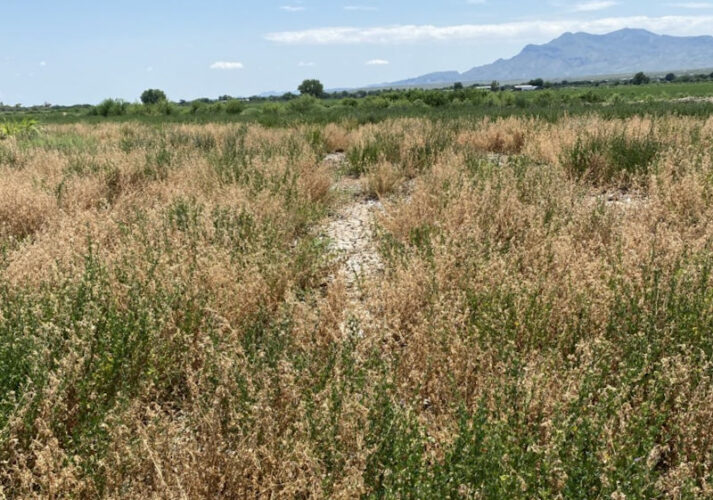 The alfalfa at Five Star Chile developed a root disease and died as a result of too much rain.
Caitie Ihrig | El Defensor Chieftain

Then, he had a chance to water and took it.

“We no more than turned the water off just a few hours, the same day it started raining,” he said. “We didn’t know what the weather was going to do in front of us. Had we known it was going to be that type of rain for that many days, we wouldn’t have irrigated.”

Due to the ground already being wet from irrigating, the monsoon rain led to the crops getting oversaturated.

Duggins lost the majority of the alfalfa as it developed a root disease and died from receiving too much water. The crop was only in its second year and should have lasted six years. They will have to plow all of it up and replant it.

Wade lost the majority of his hay as he said he had just finished cutting it and was getting it ready to be baled the next day when it started to rain.

The hay was already sold, but now it is considered cow hay due to the rain damage.

“Now, are going to sell nothing because we don’t have no hay,” Wade said. “If we have it, it’s going to be such low quality that they are going to be wanting us to give it to them. We probably will do a lot of that too.”

Wade said not selling the hay will lose him $35,000 and he was planning on using that money to pay off bills.

The only way for him to recover is to try again next year.

“I don’t know how I’m replacing it,” Wade said. “The only way I have a replacement is to live a little longer and work a little harder. Next year, here we go.” 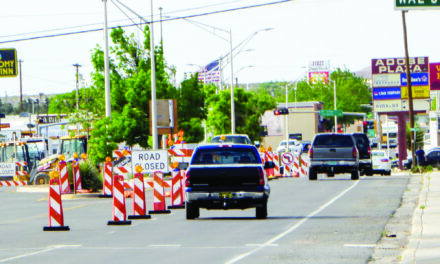