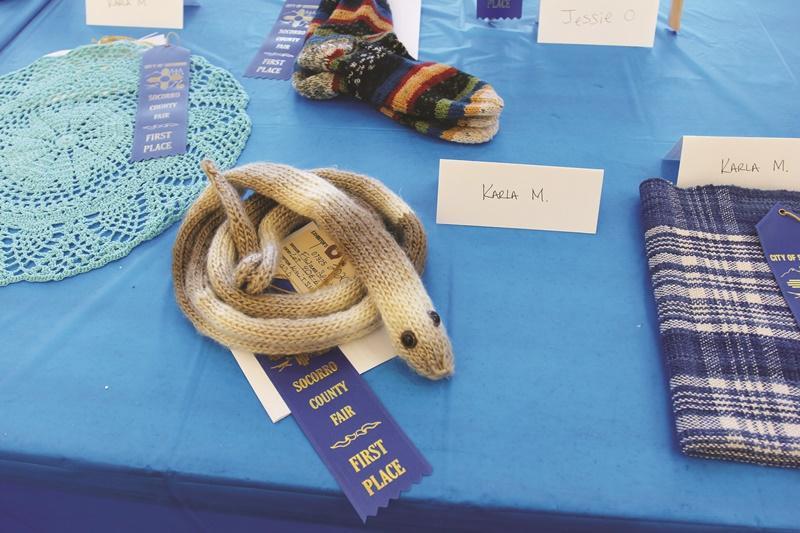 With a backlog of three years of creative work, the fiber arts exhibit at the county fair had 82 quilt entries alongside fancywork like this knitted snake.
Cathy Cook | El Defensor Chieftain photos

Quilts in a dizzying array of patterns and colors were on display in the new Socorro Convention Center for the Socorro County Fair this weekend. Also in the exhibit were crocheted creations, feats of the needle like a knitted snake and a cross stitched deer, and beautiful tradi­tional weaving.

The fair exhibit included more quilts and fancy­work — crocheting, knitting, cross stitch, weaving and embroidery — than ever, because it was the first fiber arts exhibit at the fair in three years.

The 2020 fair was canceled due to COVID-19 and the 2021 fair was lacking a fiber arts exhibit, because the decision to conduct the fair came too late to put together the annual exhibit. Due to the canceled shows, this year exhibitors were allowed to enter three years’ worth of work instead of one.

The judge needed eight and a half hours to inspect all 82 quilts.

The Fiber Arts Guild puts together the exhibition to help support the Socorro County Fair, but entrants don’t have to be Guild members. There are many tal­ented quilters and weavers throughout the county.

Snagging Best of Show in the quilts was a roman­tic image of silhouetted cranes in front of a purple and pink sunset. Detailed swirl patterns and geomet­ric shapes were stitched across the quilt. The award-winning quilt was a group project, which will be raffled off to benefit the Bosque Del Apache.

Norma Lorang, one of the three Fiber Arts Guild founders said the quilt group got permission from a photographer to use his image as the basis of the quilt, then the artist Bill Baily enlarged the image, sketched it out and smoothed some lines to create a quilt pattern. ­

The quilters worked together in meetings and at home to complete the quilt.

One person embroi­dered a dedication on the back and the quilting — the stitched patterns on the quilt top that stitches together the layers in the quilt — was done by a pro­fessional in Albuquerque. 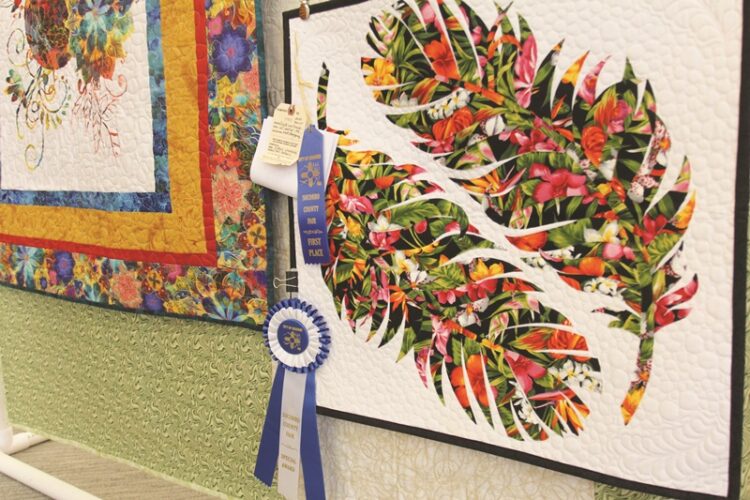 A prize-winning quilt hangs on the wall at the fiber arts show.

Last year the Fiber Arts Guild raffled a quilt that raised more than $10,000 for the Bosque Del Apache and helped them hire sum­mer interns.

Across the hall at the fancywork table, there was a new category this year: snippets. Snippets are two dimensional images that look like small paintings, created using the leftover bits of fabric that a quilter makes in the process of making a quilt.

“Fiber arts in general are all ancient crafts and they connect family,” said S. Gail Miller, the current Fiber Arts Guild President and Superintendent of fan­cywork. “Many current day grandmothers and great-grandmothers quilted.”

The judging process is quite complicated, said Miller.

Whether or not someone wins a prize, one of the most valuable things they go home with may be the comments the judge leaves about their entry. The judge leaves marks about appear­ance, harmony, workman­ship, suitability of object to purpose and overall comments, which can teach an entrant quite a lot about their work, said Miller.

Normally a knitter, Miller herself entered a woven shawl this year, which took home Best of Show.

“The first thing I’m going to do is look here because I want to see the judge’s com­ments,” she said.

Aileen Adamson also won a prize this year in fan­cywork for her bowl, made from cord sewn together. She used an online tutorial to learn how to create it.

“The ones I was look­ing at online came out like a bowl shape, but the ones I made came out straight sides,” she said. But Adamson was happy with the design accident, so she kept making them that way.

The award came as a surprise to Adamson who normally quilts and only made the bowls to see if she could do it.

Trying out new skills is one of Adamson’s favor­ite parts of the Fiber Arts Guild itself, which meets on the second Saturday of the month at the Episcopal Church in Socorro. At the end of each meeting is a short class, where attendees can learn new skills.

“We’re just an ordinary bunch of ladies, some of us older, and we just make these beautiful things. I would encourage anybody to go to fiber arts, because it’s very welcoming, it’s very inclusive,” said Adamson.

The Guild welcomes members of all ages, gen­ders and fiber arts skill levels at its meetings.

If you missed the dis­play of quilts at the Socorro County Fair this weekend, don’t fret. Many of the quilts will once again be avail­able for viewing at the Quilt Show and Sale in Magdalena at the Old Ilfeld building on North Main Street on Friday and Saturday, Oct. 14 and 15, from 10 a.m. to 5 p.m.

Along with quilts avail­able for purchase, vendors will also be selling fabric and supplies.

The exhibit will be in con­junction with the Magdalena Antique Car Show. 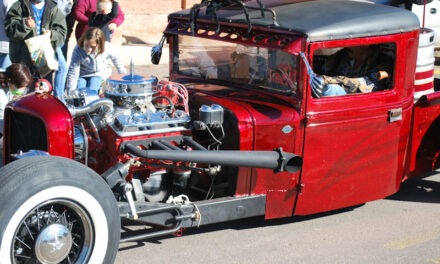 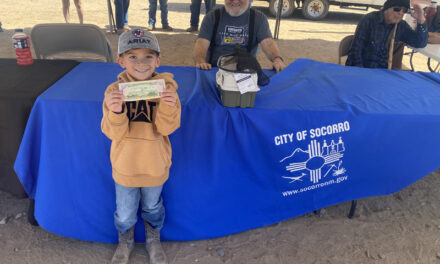 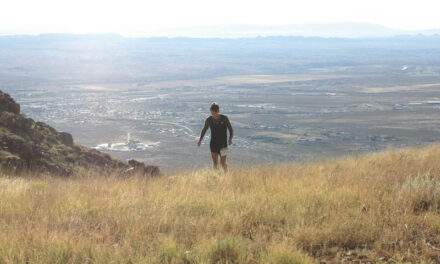