Socorro County means different things to different people whether it’s ranching or the chile harvest or high tech research, but around Halloween time, it’s known as Haunted Socorro. The storied histories of both Socorro and Magdalena, especially in the early years, have spawned tales of ghosts and hauntings.

A pamphlet called Ghost Town Guide of Socorro County published not too many years ago for out-of-town visitors featured information and travel directions to a handful of sites throughout the county. The ghost town of Riley, the mining town of Kelly, the Rosedale Mining District, the Graphic Mill, San Marcial and Fort Craig were all described. That ghost town guide, penned by Paul Harden of the Socorro County Historical Society, had nothing to do with ghost hauntings, however, Harden did research on hauntings and haunted houses for a series of articles in El Defensor Chieftain in 2009.

Harden found that the Val Verde Hotel has had its share of unusual happenings, most notably the appearance of the figure of “a woman in a flowing dress walking down the stairs from the second story only to fade away before reaching the lobby floor. Others reported hearing talking, muffled screams or banging from the vacant basement below them.”

One man reported sensing an unseen entity in the men’s room. Bartenders reported seeing figures sitting at tables after closing, glasses being moved around and the sound of slamming doors.  Diners in the now long-closed steakhouse in the Valverde occasionally reported that they felt like they were being watched.

The reports caught the attention of the Southwest Ghost Hunters Association, which was formed in 1985 by Cody Polston.

“This was back when the steakhouse was open,” Polston said in a 2014 interview. “We still haven’t figured out what’s going on there. One of our members lived upstairs at the time. He said he would leave to go to work and when he came home all the drawers in his kitchen were standing open.”

The team started its investigation by shooting a series of infrared videos.

“We stood on the stairs with the video equipment, and these little balls of light were coming in on the video, but not seen with the naked eye. We ruled out dust illuminated from the camera’s infrared light,” he said. “These balls were shooting up, close to the wall, and looking at it in slow motion, they’re actually creating a glow on the wall. They’re giving off light.”

He said the lights vanished after rising halfway up the video frame.

“And this is an interesting thing, they appeared only when there was folk music playing in the bar downstairs. Not country, not rock, but folk music,” Polston said, but didn’t know “if it was connected to the cigar box containing someone’s ashes above the bar.”

Some other locations involving things that go bump in the night Harden documented include the Socorro County Courthouse, where – at various times – office personnel working late in the Clerk’s office reported books flying off shelves, footsteps in the empty hallway, flickering lights, and voices and moaning sounds coming from the brick walls.

In one instance, frightened workers made a dash for the main entrance to the courthouse and the front doors opened by themselves.

Reports of the elevator starting by itself, the doors opening, and nobody there, is a common experience in the courthouse at night that has been reported for years, according to Harden.

On another occasion, a clerk was in the basement when she heard footsteps coming down the stairs and walking into the records room across the hall. Upon checking the records room, the clerk found ledger books strewn on the floor.

At the former detention center – an extension of the courthouse building – a female worker felt a hand grab her by the neck and later a co-worker noticed a rope burn around her neck. It is said that the jail and the clerk’s office were built over the old hanging scaffolding area from earlier times.

In years past, employees of the Socorro Post Office have reported hearing voices in the corridor in the vicinity of the postal boxes area, also the odor of a kerosene lantern. It is worth noting that at least two people were hanged from the head post of the Park Hotel corral by a lynch mob in the early 1880s, the space now occupied by the post office.

Socorro’s hanging tree at the corner of Park and McCutcheon streets is near El Torreon, where a dark figure was reported floating, as well as dishes rattling in the kitchen and lights turning on and off.

Residents in Alamillo would occasionally hear a young woman screaming or crying at night, but the source was seldom seen. Some said it was just La Llorona

Ghostly sightings have also been reported along Highway 380 east of San Antonio; one such specter was seen riding a white horse. On White Sands Missile Range, a woman in an Army uniform has been seen waving drivers to the scene of a jeep accident, but no overturned jeep could be found. At the Stallion Site, ghostly images of three men were seen walking out of a building and into the desert.

The old Jose Juan Baca building, north of the plaza, has long been a source of haunting experiences. Some claim to see Señor Baca walking a corridor, or pacing the floors in the second story.

Although Magdalena is not widely famous for ghosts or hauntings, ghost hunters have found a wealth of documentation in and around the village.

One such ghost hunter – Pedro Enriquez of Hobbs – investigated a suspected haunting in the historic Hall Hotel during a visit with the Magdalena Paranormal Phenomenon Team.

“I saw a girl walk across the doorway of room 14. I was in Room 13 and went around to look in the room and it was empty,” Enriquez said. “Her dress wasn’t fancy. It was grayish, there were a couple of flowers on it.”

He said the entity had long hair, colored dishwater blonde. “I saw that her face wasn’t distorted.”

He said he got positive readings inside the Boxcar Museum, the kitchen area of the High Country Lodge, the Magdalena Hall Hotel, a couple of residences, the cemetery and among the ruins of the town of Kelly.

“A female spirit has been seen and felt on the top floor of the Hall Hotel. It’s been known to turn lights on and off,” he said in a 2005 interview. “There’s also Cowboy Bob, who’s been seen at a ranch west of town. And Grandma Butter at the Western Motel (formerly the Butterworth lying-in hospital) has been seen in the parking lot wearing a blue dress.”

In the Magdalena Cemetery, he said he was able to record six different voices in only five minutes.

“We are very careful to be respectful when we visit cemeteries because the last thing we want to do is offend any relatives of the deceased,” he said.

He said they liked hearing of the old legends and tales of ghosts and hauntings, but when doing research they only use what they can document themselves.

He believed spirits simply have the same personality as they had when living.

“The whole idea of death and ghosts is totally different than what we’re taught. Some ghosts don’t know they’re dead. A lot of times, these spirits love to get your attention. Some carry on the same habits like smoking or drinking,” Oester said. “If someone was a nasty person while alive, their spirit will be nasty. But most, in our experience, are just people who need to know they’re still important.” 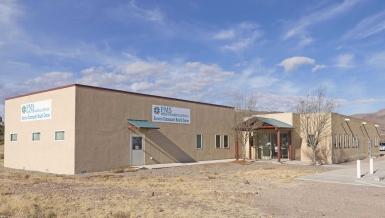 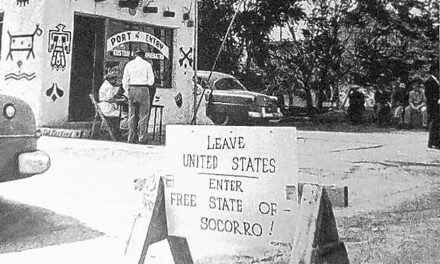