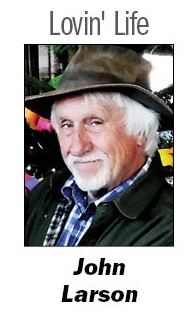 Back in 1965, I was watching the Tonight Show with Johnny Carson and he was talking about how the head honchos of the American Football League and the National Football League got together and decided to schedule a championship game between their best teams to show who was the best in the world, kind of like what baseball did with the World Series.

There were a lot of fancy, awe-inspiring ideas tossed around on what to call it, such as the AFL-NFL Championship Game or just The Big Game, but Carson said those didn’t have enough pizzazz for the marketing boys in the backroom, so they got the best corporate minds together and spent hours and hours to come up with something catchy, yet worthy of the hallowed American gridiron, “and somebody said, ‘how about The Super-Duper Bowl?’”

I was playing football at the time in high school and I remember thinking the name Super Bowl was kind of corny for the championship game, but I guess it stuck, minus the “duper” part.

I wasn’t too good at football but I sure had fun, and isn’t that what playing football is all about;  getting’ out there and roughhousing and knocking other guys around?

It’s not unlike Andy Griffith’s hillbilly account of a college football game:

“It was that both bunches full of them wanted this funny lookin’ little pumpkin to play with. And I know, friends, that they couldn’t eat it because they kicked it the whole evenin’ and it never busted.”

That whole stand-up routine was on a 45 called What It Was, Was Football, recorded years before he became Mayberry’s TV sheriff, and I guess I listened to that record probably a hundred times.

Anyway, my high school football career lasted only one season, but I had a whale of a time before I broke my foot. And I don’t count the broken nose – which I got because the school ran out of helmets with face guards and I got an old one without it – because like any teenage boy I felt pretty proud of that bloody nose. Never mind that deviated septum.

Wearing the uniform was cool, too. It made this shy scrawny kid with scrawny shoulders feel mighty imposing.

When you think about it, uniforms wouldn’t be a bad idea for everyone, not with shoulder pads and the rest, of course, but just outfits that proclaim your livelihood or profession.

For instance, when you see someone with a clerical collar you immediately know they’re in the priesthood. Or, those in law enforcement. And then there’s the military with each branch’s own distinctive uniform.

In the civilian world there nurse uniforms and even judges wear a uniform of a sort, so why not have uniforms for other occupations? Like a lawyer’s uniform or a professor’s uniform. Speaking of which, when the Three Stooges donned mortarboards and robes masquerading as professors in the episode Violent Is The Word For Curly.

Fun fact: The Super Bowl is the second-largest day for U.S. food consumption

We’re being told in advertisements that we can’t properly enjoy the Super Bowl show without a copious supply of chicken wings, chips and dip, pizza, drinks, and hors d’oeuvres to beat the band. That can’t be bad and it would give me a good excuse to run down to the Loma Theater Sunday afternoon for a big ol’ bag of buttered movie-theater popcorn. My wife and I dropped by the Loma last Friday after work for a couple of bags and I dare say it is greatly improved over any microwaved stuff. We’re going back for more.

When you get down to it, the Super Bowl is more than football. It’s a wholly secular Sunday festival that brings people together for several hours to talk and laugh and eat, and intermittently look to see what’s happening on the TV screen. The show features crazy commercials and a big halftime show; this year with a Canadian singer Abel Tesfaye, whose nom de plume is The Weekend.

I know I joke about it, but really, the Super-Duper Bowl is something all ages can enjoy together; parents, kids, grandparents, aunts, uncles, you name it.

Hard to believe, but it’s been 55 – excuse me, LV – years since I was glued to our black and white TV to watch Bart Starr and Paul Hornung win the first one. They’re gone now and my deviated septum is fixed and my foot has healed.

But the Super Bowl goes on. Pass the popcorn, please.

Layin’ It On The Line: Having student loan debt at retirement time can be a disaster

Letter: When do we intercede?