Officers were called at 10:50 a.m. to a home on Grant Street where the suspect had overdosed and was found unconscious. The officers and medical staff located the suspect on the floor of the bathroom unresponsive. Next to the suspect was a syringe and spoon with drug residue. He was given two doses of Narcan and moved to the living room, where he woke up and spoke with officers and EMS, but refused treatment. The suspect admitted he was on probation and gave consent to search his person. The officer located a baggie with heroin in the suspect’s right front pocket. The suspect was arrested and taken to the SGH for medical clearance and booked into the SCDC.

An officer was called to the Probation and Parole Office at 9:03 a.m. for a suspect with an arrest warrant. The suspect’s warrant was confirmed and the suspect was arrested and booked into the SCDC.

A victim reported at 9 a.m. that someone had made unauthorized transactions using the victim’s bank account. The victim provided the officer with the locations of the transactions. The officer contacted the two businesses. One business said they did not have any video of the incident since the camera system records over itself daily. The other business said they did not have a record of the transaction amount on the listed date. At this time the suspects are not known.

An officer was called at 12:19 p.m. to the Probation and Parole Office for a suspect having a valid arrest warrant. The suspect’s warrant was confirmed and arrested and questioned on other open cases the suspect was named in. The suspect was processed and booked into SCDC on the warrant.

A caller reported at 9 a.m. that someone damaged the window of a business in the 200 block of S. California. The officer was shown the damaged window which appeared to have been hit with a blunt object. The window was next to the main roadway with a sidewalk in front of the window. The business had cameras but the video footage has not been seen, and the staff was not sure if the incident was captured on video. The damage to the window was estimated at $200. At this time there are no suspects.

A homeowner called police about finding graffiti on a wall at their residence on Marshall Lane. The writing read SOS or SDS. The victim said the cost to remove the writing was estimated at $25. At this time the suspects are not known.

An officer conducted a traffic stop at 1:31 a.m. on a vehicle at Park Street and Spring. During the traffic stop, the officer noted the female driver had drug paraphernalia in her lap. When asked about the paraphernalia the female became uncooperative. The suspect and passenger exited and gave consent to search the vehicle. The officers searched the vehicle and located a black pouch that contained narcotics. The suspect claimed ownership and was arrested. During a search of the suspect’s person, the officers discovered a plastic baggie with narcotics. The vehicle was towed and the suspect was processed and booked into SCDC. The narcotics were field-tested positive for narcotics and were logged into evidence at the Police Department.

An officer picked up a suspect known to have an active arrest warrant at 9:40 a.m. outside of an apartment in the 800 block of Spring Street. The suspect was arrested and taken to the Police Department. When the suspect was being removed from the patrol car, the officer found a plastic baggie under the suspect that was not there prior to the suspect being placed in the car. The baggie was recovered and contained a crystal substance that tested positive for a narcotic. The suspect, who denied dropping the baggie, was processed and booked into the SCDC.

An officer was contacted by a male at 11:29 a.m. at the Socorro Police Department who wanted to make a report. The male said he was a project manager of a company working on the roads at California and Manzanares and that several road barricades were missing. The officer was able to obtain video from a nearby business which showed New Mexico Department of Transportation staff removing the barriers. The officer contacted the supervisor for the state highway department, who said the barricades were removed for safety reasons. The officer contacted the caller and told him the barriers were removed and provided the contact information for the DOT supervisor. No charges are filed.

An officer was called at 12:18 p.m. to Walmart for a set of keys being found that was attached to a container that had a possible controlled substance. The officer was advised an employee located the keys in the door lock on a vehicle in the parking lot. The employee brought the keys in and handed them to a greeter who then gave the keys to a manager. The container was checked and inside was a crystal substance. The officer looked at the substance and identified it as being methamphetamine. As the officer was speaking with the manager a juvenile came in asking about keys, then left and returned with the suspect. The suspect confirmed she was looking for her keys. The officer had the suspect identify the keys and then escorted the suspect outside. The suspect was advised of her rights and then explained that she found the silver container on her key ring at her hotel. She believed the substance inside the container was methamphetamine and that she took the container so her daughter would not get it. The suspect was released pending charges and approval by the DA. The narcotics were field-tested positive for a controlled substance. The evidence was logged at the Police Department.

A caller in the 1200 block of Santa Fe Lane reported at 4:56 p.m. that a neighbor’s dog barks constantly disturbing the caller. The caller said she has made several calls to animal control about the dog’s barking and that she wanted charges filed. The officer met with the owner of the dog, who said he puts the dog out for fresh air and to use the bathroom, but the dog is mostly inside. He was informed that the caller wanted to file charges for the noise. The owner was cited into court.

A female in the 800 block of Spring Street reported at 1:38 p.m. that the male suspect came to the home intoxicated to pick up his belongings. While in the home he began to argue with her and became physical with her, slamming her head into the floor. The victim showed signs of battery to her head. The suspect left the apartment to another apartment in the complex. The officer located the suspect walking in the complex. He was detained and when questioned said he did not do anything wrong. The suspect was placed under arrest and booked into the SCDC.

An officer was dispatched at 8:14 p.m. to a business in the 400 block of California where a woman said the IDs of hers and her daughter were missing from her vehicle. The officer did not see any signs of the vehicle being tampered with. 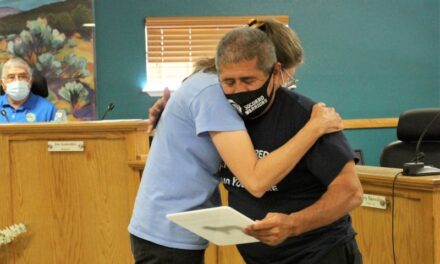 Another extension of the indoor-mask rule