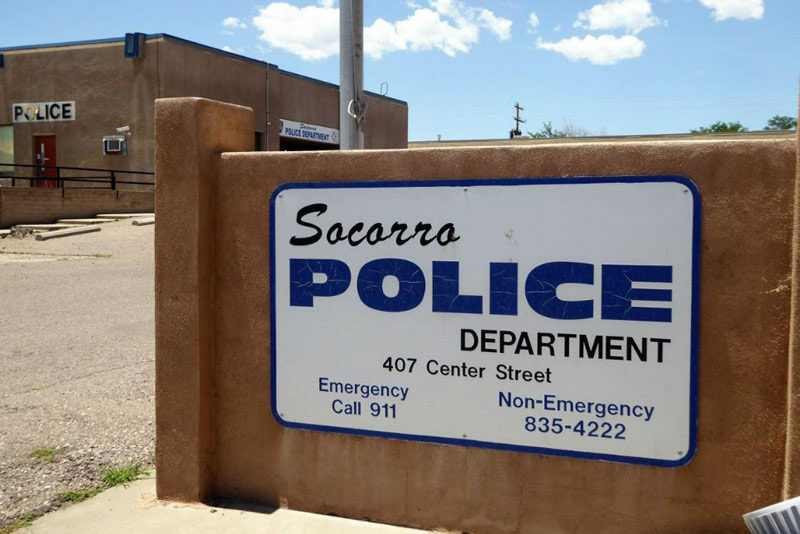 Items taken from reports at the Socorro Police Department

A couple staying at a hotel on California Street reported that someone got into their vehicle in the parking lot and took both their passports and stole a computer that was kept in a computer bag. There were no cameras in the area that would show any suspects. At this time no suspects are listed.

A woman reported that upon checking the storage units in the 800 block of HIghway 85 found that several storage units had been opened. The victim said it did not appear that any items were stolen, but a wooden fence has a panel missing and access to the lot may have been gained through the fence. The officer attempted to make contact with the homeowner. No one was home. At this time there are no suspects.

Police were called about someone striking a city-owned street light on Bernard. The officer looked at the damage, it appears a large vehicle was making a turn and struck the light causing the damage. The damage is estimated to be $700. There are no suspects at this time.

An officer was flagged down by a caller on Mineral Way, who said he had a disagreement with a neighbor over a grassy area the two share. He said the neighbor was upset over his dog using the bathroom on the grass and witnessed the neighbor kicking the dog. The officer met with the neighbor who said he was upset over the dog using the bathroom on the grass so he contacted the caller to talk about the incident. The neighbor claimed the dog tried to bite him so he kicked the dog. Neither party wanted charges filed. The officer documented the incident.

A woman reported that the day before she was in a vehicle with a friend on Fifth Street when the suspect stopped the victim and friend. The suspect is the son of her friend. He demanded she exit the vehicle. As she was gathering her belongings the suspect became upset and pulled her from the vehicle, throwing her to the ground and striking her. She said she left her purse in the car as she was being pulled out, but when she asked for her purse back she was told the purse was not there. The victim said the purse contained her blood pressure pills, cholesterol medication, and oxycodone. The victim also showed signs of battery. Charges are pending.

A man on Arroyo Drive reported a missing handgun. He said the gun was in his car and he saw it there at lunch. By the left work it had been taken, sometime during the afternoon.  The victim provided a serial number for the handgun and completed a theft declaration. The handgun was entered into NCIC as stolen.

Officers were called to a home in the 600 block of Blue Canyon for a domestic. At the scene, the male suspect said he and the victim have been having problems. He had been drinking and returned home and an argument occurred. During the argument, the suspect slapped the victim. He was placed in handcuffs. The officer met with the victim, who explained that she was upset with him for coming home drunk. The two began to argue and he slapped her. She did have signs of being struck. There was a small child in the home and was not harmed. The suspect was placed under arrest and later booked into SCDC.

A woman reported that she was standing outside of Burger King when the male suspect drove by and pointed a firearm at her. She said she contacted the suspect’s probation officer and was advised to file a report. The officer obtained her information and attempted to locate the suspect. The officer was able to speak with the father of the suspect who claimed he was with him all day and he did not point a gun at the victim.

Officer called to a home in the 1400 block of El Camino Real for an argument. The officer met with the female caller outside who said she picked up some money by mistake; money that belonged to her sister. She said she was arguing with her sister when her brother came out and joined in the argument. During the argument, she was pushed to the floor. The brother told the officer he heard yelling and came out of the bathroom to see what was wrong. The brother said first pushed him and so he pushed her back. The sister insisted the caller took her money and did not want to return the money. The officer had the caller return the money. Neither party wanted charges filed. The incident was documented and the grandmother was notified when she arrived home.

An officer called to the scene of an argument between a male and a female on Fifth Street. The female said the suspect was arguing with her and she wanted him out of the car. The officer obtained their information and completed an NCIC check on both. The suspect was shown to have a valid arrest warrant. He was arrested and conceded that he had a glass pipe in his shoe. He turned over a glass pipe with white drug residue. He was arrested on the warrant and cited into court for the drug paraphernalia.

A driver was pulled over in the 700 block of Sixth Street, and an NCIC showed him to be sought on a valid arrest warrant. During a search incident to arrest the officer located a baggie with methamphetamine. At the police department, the substance was tested and showed a positive for methamphetamine. The driver was processed and booked into SCDC.

An officer stopped a male subject for suspicious activity on Duggins at the ditch bank. During the contact, he was patted down for officer safety. During the patdown, the officer noticed he was holding an item in his hand. The suspect was asked to show the officer what it was and he showed the officer a folded paper. In the paper, officers located methamphetamine. The suspect was arrested and booked into SCDC. . The evidence was logged at the police department.

A person staying at the hotel in the 1000 block of California reported that someone entered his pickup in the parking lot and stole his Lenovo laptop computer, ReMarkable tablet, and Bose earbuds. The victim said an eyeglass case and other items were moved around the vehicle. The officer collected the glasses case and Redidix device as evidence. A theft declaration will be completed so the computer can be entered NCIC as stolen.

An officer met with a woman who wanted to make a report. She said she was on California Street and three females started yelling at her. She said one female spit on her vehicle and also spit on her person. Then the females attempted to her out of her own vehicle. The officer arrived at the area where the females were supposed to be and did not locate anyone. It is not known who the suspects are.

A woman in the 200 block of Highway 60 reported that someone took two bicycles from their front porch. The two bikes were valued at $235. The officer did see footprints in the area that did not belong to the victim. At this time there are no suspects.

A woman reported that the suspect entered her home in the 300 block of Fifth Street without permission and took a bottle of wine from the home. The victim could only provide a first name for the suspect, and could not provide an address for the suspect. At this time the suspect has not been located.

Officers were dispatched to Harold’s Gift Shop where males were jumping over the fence and taking items inside the fenced area. One suspect trying to hide by a wall and was placed into handcuffs after struggling with the officer. Officers were given names of two other males who had left, heading down Texas Street prior to the police arriving. The suspect told officers where they could find a four-wheeler that had been stolen by one of the suspects who had fled. The four-wheeler was located and turned over to the Sheriff’s Department as the location was in the county. The male suspect was arrested and charges will be filed.

An officer was dispatched to Mineral Way where two neighbors were arguing with each other. Neighbor 1 stated he was fighting with Neighbor 2 for the dog using the bathroom on the grass. He said his Neighbor 2 was yelling at him for letting his dog on the grass. Both got into each other’s space. Both wanted to file charges on the other.

A man in the 1000 block of Cassidy reported that an unknown suspect entered his unlocked vehicle taking $5 in loose change from the pickup. Other items were gone through but nothing else was taken. At this time there are no suspects.

An officer was dispatched to the Chevron on California Street on a larceny report. The store manager said a customer’s cell phone was taken by an employee. The employee later returned the phone but without the SIM card. The employee was terminated and given three days to return the SIM card before charges will be filed.

An officer was dispatched to Walmart for a female who was under ringing her items. When confronted by the officer, the female admitted to under ringing her items. She paid for all items. She was told she is formally trespassed from the store and she signed the paperwork. She was advised she is being charged with trespassing and will receive paperwork in the mail for her court date.

An officer pulled a driver over on a traffic stop on Park Street and recognized her as someone who had warrants for her arrest. She was placed under arrest and cleared for incarceration at the Socorro General Hospital and incarcerated on her warrants at the SCDC.

An officer was dispatched to Circle K for a shoplifter. A check with dispatch showed she was already trespassed from the business. She was arrested and incarcerated at Socorro County Detention Center.

A complainant at Parkview Elementary School reported that he found some of the school windows unlocked and about three window screens removed and damaged. It was estimated the window screens which were damaged to be worth $20 each. The officer was advised they had also located the teacher lounge unlocked and the nurse’s door open but nothing was missing. The officer was told the security cameras were not working at the time. There is no suspect at this time.

Children under 12 eligible to receive vaccine