Nov. 1
• Police responded to a battery call at California and Spring streets where the male victim said the suspect stabbed him on the arm with a knife during an altercation. The officer was shown a small cut to the victim’s arm. The victim said he was also having pain in his ribs. The EMS staff told the officer the victim has called an ambulance before for rib pain. The victim gave a description of the suspect’s clothing and name. The officers were able to locate the suspect, but his clothing did not match the description. The suspect was advised of his rights and advised the reason for the contact. The suspect claimed he has not seen the victim in several days and did not fight with the victim. At this time no charges were filed after the case was staffed with the District Attorney’s office.

• A woman in the 900 block of El Camino Real reported that she received an email from her supervisor asking her to purchase $1,500 in Google Play gift cards. She did as requested. She later learned that her supervisor’s email had been hacked and he did not send the email. At this time there are no suspects.

• A man in the 400 block of Eastwood Loop reported the male suspect took a rope from a fence, causing $500 in damage to the fence and pole. The victim said the neighbors had a video of the suspect removing the rope and causing the damage. The officer met with the suspect who denied removing the rope. The incident was documented. The officer was not able to obtain video of the incident.

• A man in the 100 block of Main Street reported an unknown suspect entered his vehicle and took several tools from the cab of the truck. Items included a hammer drill, a reciprocating saw, and an air compressor. The victim provided a list of the tools, a total value of $660. At this time there are no suspects.

• El Camino Restaurant reported an unknown suspect stole the patio lights from the outdoor patio. The officer was shown the video of the incident. The suspect was not able to be identified.

• A woman in the 800 block of Calle Linda reported that her iPad was stolen from her home. She said the last time the iPad was seen was on October 23. She said she may have left the home unlocked and someone may have entered the home. The iPad was valued at $350. A serial number was provided and a theft declaration was signed. The device was entered into NCIC as stolen.

• A woman reported that she witnessed a male walking near an alleyway by Puerto Seguro who picked up a small kitten and throwing it at her car window, killing the kitten. She described the suspect and showed officers a picture of the suspect from social media. The officer contacted the suspect who denied throwing the kitten. The animal control officers took possession of the deceased kitten. Charges were filed on the suspect.

• A man in the 100 block of N. Sixth Street reported identity theft where someone had contacted his credit card company and was able to raise the credit limit and add a user to the account. The victim said the suspect was able to provide his personal information. The officer was provided with the card company’s information. The officer contacted the card company and was provided with a name that was listed as the secondary card user. The name was found to be a generic name often used for fraudulent accounts by the card company. At this time the suspect is not known.

• An officer was called to a home on Bagley in reference to the male suspect being threatened for talking to an under-age female. He said he became friends with the juvenile female after meeting her at the gym, but that it was not sexual or inappropriate. The officer met with the female victim who confided that the suspect would act weird towards her and her friends. She said he obtained her Snapchat information and sent several nude photos of himself to her. The victim was asked if she could provide the photos, but she could not because once the photos are viewed they are deleted. The case was staffed with the District Attorney’s office. No charges were approved since there was no evidence of the photos being sent.

• Officers were called to the 1200 block of Cuba Road for a vehicle parked in the middle of the street. The officers found the vehicle with its lights on and blocking traffic. The officer walked up to the car and located the female suspect in the driver’s seat. The officer tried making contact with her, but when she saw them she sat up and put the vehicle in gear, and drove off. The officers pursued with lights and sirens. The suspect traveled to State Road 1 where the officers ended the chase and returned to the police department. She was known to the officers and charges are filed.

• An officer was patrolling on Neel Street and pulled over a truck without a license plate. The male driver was advised of the stop and the VIN was run through NCIC. The driver was looking through a binder and the officer noticed a crystal-like substance in a bag in the folder. When asked about the substance the driver turned it over to the officer. A passenger in the vehicle was checked through NCIC, which showed he had a warrant for his arrest. The substance tested positive for methamphetamines. Both males were incarcerated at Socorro County Detention Center.

• A man in the 1200 block of Santa Fe Lane reported the theft of several tools. He said someone had entered his yard by pulling up the fence. The victim provided a list of tools missing which included a 3/8 inch impact drill, a 1/2 inch drill, electric shears. A reciprocating saw, an impact driver, a propane torch, a planer, and an electric welder. The victim listed a person of interest but admitted he did not see the male in the yard.

• Officers were called to California and Church for a vehicle crashing into the C-Bar-D business. The officer arrived and met with a witness who said he was driving by and saw that the suspect’s truck had driven into the building. He helped get the suspects out of the vehicle and pointed out the driver. The driver and passenger both had injuries and were taken to Socorro General Hospital for medical treatment. Both occupants had a strong odor of an alcoholic beverage on their person and showed signs of intoxication. At the hospital, the suspect attempted to leave the hospital. The officer placed both suspects in handcuffs and escorted them into the hospital for medical treatment. The driver was asked if he would perform field sobriety tests, and he refused. While the officer was meeting with the suspect/driver, the second suspect was cursing and yelling from another room telling the suspect/driver not to take any tests. The suspect/driver was advised of the implied consent warning and still refused to be tested. He was placed under arrest and taken to the police department and was again advised of the implied consent warning and remained silent. The officer started the IR-8000 and gave the suspect driver one last opportunity to provide a breath sample, and he did not. The suspect was processed and later booked into SCDC.

• An officer was dispatched to a residence in the 300 block of Mt. Carmel for a breaking and entering. The male victim showed the officer a window that had been broken, and the officer noticed blood on the window and the couch. Photos were taken of the damage and glass with blood was taken as evidence. Stolen were a laptop valued at $1,125 and a tablet valued at $700. The suspect is not known at this time.

• Police were called about damage to windows at Cherrill’s Western Wear on California Street. The victim told the officer the inside of the windows had plywood so no entry could be made. It was not known what was used to damage the windows. The incident was documented.

• A woman reported that a man was harassing her in the parking lot of Spin City. She told the officer she had a dog in her vehicle and it was barking at the male suspect. She said the male suspect threatened to kill the dog if the dog bit him and then pulled out a small knife as he was threatening the dog. He then walked around the vehicle to enter his vehicle and pushed past her, striking her with an elbow. The officer met with staff at the laundromat and was given the name of a possible suspect. The victim was able to provide a license plate for the suspect but she did not want charges filed at this time. The officer was provided with a number for a witness, who said she saw the male put his head in the victim’s window, but she did not see any physical contact with the victim.

• An officer was dispatched to a residence in the 400 block of Nicholas on a report of a stolen rifle. for larceny of a firearm. The victim said he was missing a .22 caliber firearm and a Fender amp. There were no signs of forced entry into the residence. The victim listed a person of interest; a family member who lived with him. The family member told the officer he did not take the firearm but had a friend over while the victim was away from the home. At this time the suspect is not known. 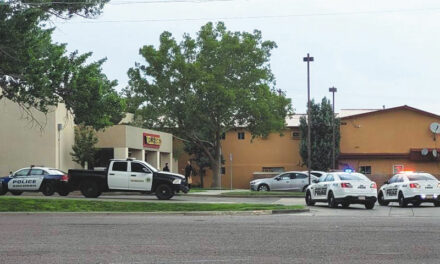 Magdalena tries to pull in tourists with fall events 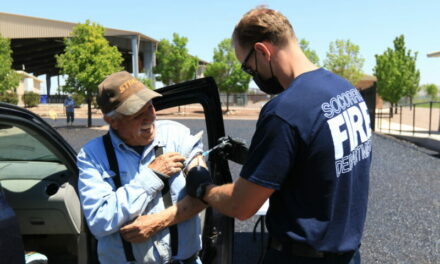