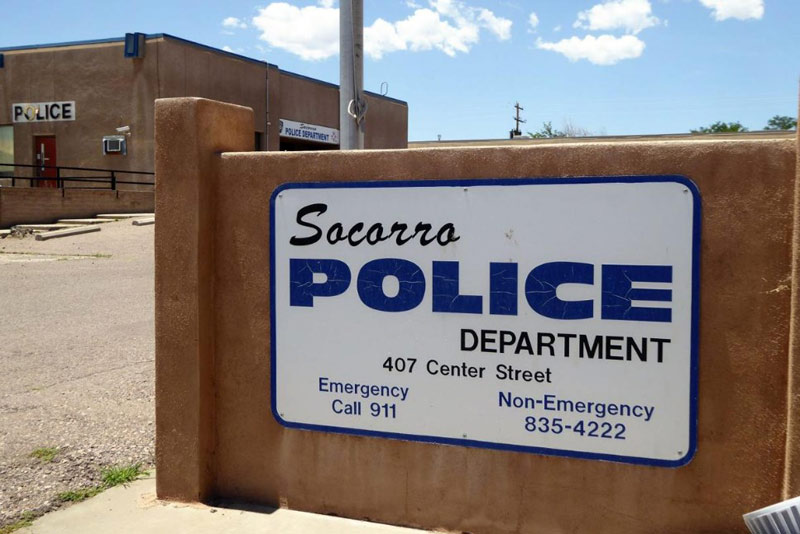 Officers were called at 3:30 p.m. to the 700 block of Bursum for an argument. The officers met with the caller who said the suspect was at the home wanting his TV, but he left when she called police. The officers located the suspect and completed an NCIC check which showed him to have a valid arrest warrant. The suspect was arrested and booked at SCDC.

An officer was called at 1 p.m. to the cell phone store where the caller reported that the male victim claimed his phone service was being suspended by an unknown person and the victim wanted to file a report. The officer met with the victim on Baca Street who said his ex-girlfriend was possibly suspending his phone service. The victim began informing the officer of other incidents involving his bank card and suspecting the ex-girlfriend. The victim said he had a heart attack and the ex-girlfriend saved him. The victim continued telling the officer about other incidents and other officers but could not provide any information on the phone problem complaint. The officer documented the incident.

A guardian reported at 5 p.m. the juvenile suspect pulled the victim’s pants down during class exposing the victim’s privates. The officer met with the school’s assistant principal who stated the juvenile suspect was removed from the class after the incident and the parent was contacted. The juvenile was believed to have acted alone and was remorseful for his actions. The officer met with the parent who stated the suspect was remorseful for the incident. The parent advised the suspect had his pants pulled down by another student, but it was not reported. The parent was informed that the incident would be forwarded to the Juvenile Probation Office.

An officer was called at 7:52 p.m. to the Chevron Food Mart on South California in reference to a trespasser on the property. The officer located a male in the area matching the description given. The male stated he pitched a drink after being given the total for the drink that he was unable to pay for. He then took a jerky stick from the store. The officer transported him back to the store where the reporting person wanted him trespassed from the property. He was cited for shoplifting.

An officer was dispatched to a residence in the 1100 block of Chaparral for an assault report. The officer met with the victim who was being threatened by another female. The suspect was located and told to leave the reporting person alone.

An officer was called by a burglar alarm going off at 3:16 a.m. at a business in the 600 block of California St. The officer found a door unlocked and checked the building but did not locate anybody inside. Several items had been moved that appeared to be ready for somebody to take. Officer contacted an employee of the property owner and the building was secured.

An officer was dispatched at 12:30 p.m. to Subway for a male who was unresponsive but breathing. A syringe was located next to him and he appeared to be overdosing. The officer administered Narcan. EMT arrived later and he was transported by ambulance.

An officer was dispatched to Vista Montano apartments where a male was breaking windows. A witness told the officer he saw the male breaking windows and also slapping an elderly male. The officer noted several windows broken. The male suspect was arrested and incarcerated at Socorro County Detention Center.

An officer was summoned at 5:40 a.m. to Circle K and met with two female subjects. The victim told the officer another female came to Circle K and attacked her; scratching and pulling her hair. The victim said the suspect used to date her cousin but has since broken up. She said the attack was unprovoked and she tries to keep to herself. The victim said it seemed to her the suspect may have been intoxicated and said she was upset because she believed she was spreading rumors about her.

Officers were called at 3:24 p.m. to Highway 85 for a possible crash. The officer met with the male caller who said it wasn’t a crash but that a gust of wind blew over his motorcycle. When the female tried to hold on to it, it fell on her leg, causing an injury. The female was taken to the hospital.

Officers were called to the scene of a fight at Sixth and Wal Street. An officer was meeting with a male suspect and told him to stand by while the officers met with the other subjects involved. The male suspect then became verbally abusive and was told he was being detained. He then tried to run from the officers but had to be taken to the ground, and as the officers were attempting to restrain him, a female ran up and struck an officer several times. She was also detained. The male suspect also attempted to disarm an officer by grabbing the officer’s Taser. Both suspects were arrested and booked into the SCDC.

Officers were called at 8:17 p.m. to Quick and Easy in reference to somebody caught on camera trying to break into vehicles. The officers met with the manager who showed the officers a male attempting to get into a vehicle. Officers then got a call about a male trying to break into the Bureau of Land Management building. The male was located on the BLM property and when asked what he was doing there, stated he was looking for the embassy. The male was wearing the same clothing as the male in the video footage from Quick and Easy. He was asked why he was at Quick and Easy earlier and said he was “looking for something.” The male was medically cleared and incarcerated at the SCDC.

An officer was dispatched at 12:32 p.m. to a report of breaking and entering in the 600 block of Memory Lane. A male said his door was left open by his daughters. He said he noticed his internet was unplugged and that he was missing $3,000 from a nightstand in his room. Officer was given the name of a possible suspect.

A male reported at 7:39 p.m. that he had been staying in Albuquerque and had a friend staying at his home in the 1600 block of El Camino Real. The victim said he was told that a neighbor came to the home and let three dogs off their leash and refused to return the leash to the victim’s friend. When the victim returned home, he was missing a PlayStation 4 and a bag of miscellaneous tools, as well as his three Husky dogs. The officer attempted to speak with the neighbor, but the neighbor was not at home. The officer later met with the victim who recovered one of his dogs from the property next door.

A victim reported at 6:30 p.m. she was picking up a TV at a residence in the 500 block of Halstead when she was bitten by a small dog that came from across the street. The victim had a small bite wound with bleeding. The officer contacted the owner of the dog. The owner was told that the dog was running loose and had bitten another person. The officer asked for paperwork and vaccination records for the dog. The records were not available. The officer took possession of the dog for quarantine and issued citations to the owner.

A woman called about having legal custody of her son and wanting to pick her son up from an aunt’s home in the 1100 block of Chaparral. The officers escorted the caller to the home and met with the aunt and child. The aunt told the officer the child did not want to go with his mother. The officer met with the child who stated he did not want to go with his mother because he is left alone with his elderly grandfather and he does not feel safe with the grandfather. The child stated he wanted to get to school and left on the bus to go to school. The caller was advised the child was going to school and that he did not feel safe with her. The officer called in a CYFD report.

Officers were called at 12:25 p.m. to the 1100 block of Sixth Street for an argument. The suspect said he and a female were looking for homes to rent when they stopped at the address. The suspect stated he was looking at the house when he was approached by the male victim who claimed the two were stealing and tried to obtain the license plate number. The male suspect did not allow the victim to record the plate and threatened to fight the victim. Officers talked to the victim who said he saw the two standing on the porch of the home that was occupied by a friend of his. The victim tried to obtain the license plate of the suspect’s car when the suspect threatened to fight the victim. The suspect was cited into court.

An officer was dispatched to the 900 block of California for a male who was urinating on the sidewalk. The officer issued a non-traffic citation and advised the suspect he needed to leave. The officer met again with the suspect who had left his belongings on the sidewalk and was in possession of a shopping cart. The male was incarcerated at Socorro County Detention Center on the charges of receiving stolen property, disorderly conduct, and littering.

An officer was called at 10:22 p.m. to the 100 block of Neal in reference to damage to property. The officer met with the victim who stated he heard a window breaking and walked outside and noticed the window on his vehicle to be broken. He then noticed a male walking south of his residence. A witness told the officer she saw the male that broke the window and gave a description of the male walking with a female. A male matching the description walking with a female was located, but the male ran from the officer. After a short foot pursuit and fight, the male and female were placed under arrest. Both individuals were transported to SCDC and booked on the charges of battery on a peace officer, resisting or evading a peace officer and criminal property damage. The male also had an active warrant for his arrest.

An officer was called at 8:10 a.m. to the 800 block of Spring Street in reference to male trespassing. While en route, the officer located and detained the suspect. The officer arrived at the apartments and met with the victim who stated the suspect was told to leave multiple times and she wanted to press charges. The officer informed the suspect he was now under arrest for trespassing.

An officer was called at 2:35 p.m. to the 500 block of Tierra Bonita in reference to a theft. The victims stated they were outside of their residence when the suspect arrived. The suspect was there for a short period of time, then left suddenly. Once she left, the victims noticed a phone and money missing, and believed the suspect to have taken the items due to nobody else being near them. The officer went to the suspect’s residence but was unable to make contact. A short time later officer was in the area of the suspect’s residence when he noticed her outside, and then run into the residence and close the door. Officers contacted the homeowner who allowed them into the residence and the suspect was located inside. The suspect was placed under arrest and transported to SCDC and booked on her charges. 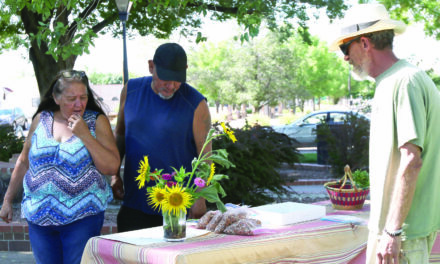 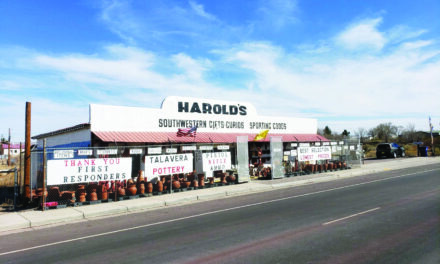 Socorro back to welcoming first responders