Home » News » Lightning only one cause of power outages 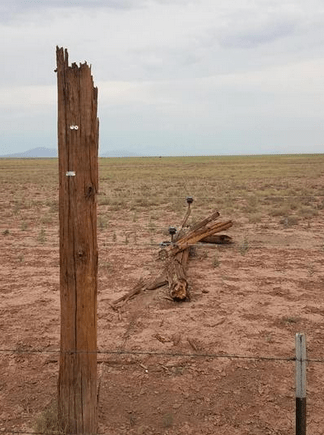 A June 23 storm took a 3-phase pole down near mile marker 17 on Highway 380, impacting all SEC Members east of the Stallion Range turn off. John Larson – El Defensor Chieftain

In the monsoon season, lightning strikes can be more frequent, and that can sometimes lead to power outages.

On the afternoon of July 14, one such bolt of lightning struck the power pole adjacent to Solaro Manufacturing on Enterprise Road. The strike not only took out one of the four transformers mounted on the pole but in the process caught the pole on fire.

He said he and a crew of seven were promptly on the scene.

“We got the call at 4:30,” he said. “Socorro Fire Department was called and extinguished the fire quickly enough that the main line could stay energized. We had a crew of seven to take care of the line.”

SEC linemen then verified that the fire burned the pole to the point that it was not safe, so crews began the task of replacing the entire pole.

Power was out for a good part of Socorro’s industrial park area, including Socorro Community Health Center, The Ark of Socorro Veterinary Clinic, the City of Socorro Rodeo and Sports Complex, the Fresenius Kidney Care dialysis center, and other buildings.

“Fortunately, we were able to keep the power to the hospital on with an energized line,” Dettmer said.

He said it was imperative that the crews work through the night to replace the pole to ensure that power to all customers would return by Wednesday morning. “We are always cognizant of the needs of the customers.”

“If there is a good side to this,” said SEC’s Communications and Public Affairs Director Jimmy Capps. “It went out at quitting time, which means most customers didn’t know their power was out for a few hours.”

He added that the power line on that particular pole extends to the San Antonio/Luis Lopez area. “It needed to be changed right away to prevent additional outages,” Capps said.

Dettmer said most outages are weather-related.

“Lighting, as well as wind, trees falling on lines, animals, vehicle accidents,” he said. “Sometimes it’s just age. We have a large area to maintain and sometimes it’s the age of our line. You know, things wear out after a time.”

In view of this, Capps said annual pole inspections are needed. Approximately 10 percent of the 45,000 poles are inspected on rotating years.

“We get a contractor to patrol and inspect every year,” Capps said. “They find poles that are in need of being changed. We hope to get 40 to 50 years out of a pole, but even though they’re chemically treated they may have internal rot you can’t see.”

Dettmer added that a lot of dynamics are going on besides getting the lights back on when responding to a power outage.

“Safety is not just a buzzword. When a lineman answers an outage call, he’s got so many safety dynamics he’s got to look at,” Dettmer said. “Take a vehicle accident, for example. Are there energized lines laying on the ground? A pole across the roadway?

Power outages in town are often easier to track down, Dettmer said, than those that occur somewhere out there over the 3,300 miles of line and 10,000 square miles of hinterland the co-op covers.

Capps said if somebody’s power goes out there’s no big board on the wall at the co-op that shows where a break is, but newer meters can show on the main computer where power is out.

“The meter will say, basically, it’s out of power,” Dettmer said. “We hope to have that fully implemented by the end of the year.”

That kind of information will aid the linemen on standby in narrowing down where that problem might exist.

“The largest footprint of all co-ops in the state, as far as the land area we cover,” he said.

There are power poles and lines strung out to Fence Lake, Old Horse Springs, down to Beaverhead, over to the Santa Fe Diner and Fort Craig, up to Drippings Springs almost to Mountainair and almost to Carrizozo north of the Valley of the Fires.

Fire Weather
April 13, 2021, 8:00 am
Come as close as possible to the heart of your community.
Subscribe Today!