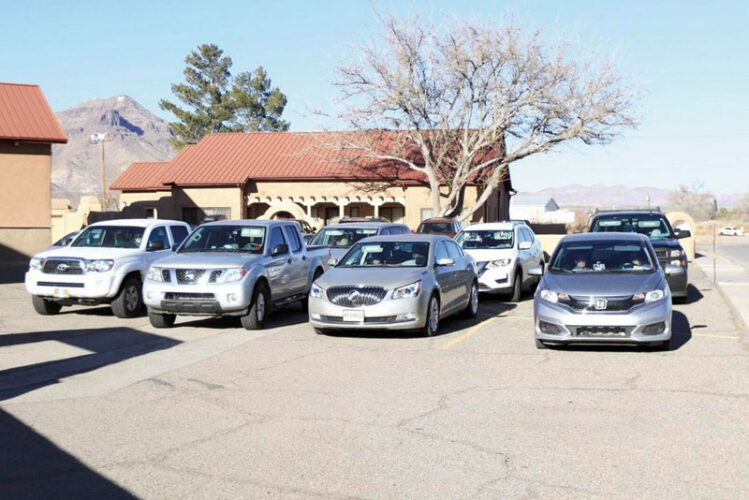 During mass at San Miguel Church, people sit in their cars to listen to the live stream. They can then receive communion at the church doors. Caitie Ihrig| El Defensor Chieftain photo

Instead of gathering together in a church to celebrate Christ and the Christmas holiday, churchgoers will have to watch and participate in mass from their home this year.

Since the coronavirus pandemic started, Epiphany Episcopal Church has not held any in-person masses. Epiphany and their Bishop created different phases for the church to follow throughout the course of the pandemic.

Father Steven Stephens of Epiphany said that phase one was live streaming mass from the church where the only people there were the ones necessary to help stream it. They did not exceed more than five people. Then, Epiphany moved to stage two where 10 people were allowed in. Father Stephens said the church considered allowing more people in but than the pandemic started to get worse.

For the next two weeks, Father Stephens live streamed mass from his house.

“We spoke to the Bishop again and said, ‘I think people feel more comfortable if we are in the church and if we do that, we need a few more,’” Father Stephens said. “He supported us in going back to five people, which is what we are at the moment… I’m more comfortable with moving slowly and I recognize that it’s hard, especially at Christmas time. It’s hard for me and hard for everyone, but maybe God is asking us to make a sacrifice.”

Throughout the pandemic, Father Stephens said that he has had conversations with other priests who also feel stressed out from having to live stream and learn new technology so that mass can still be held.

“it’s almost like being put in a room with a blindfold on,” he said. “All the people you need to talk to are in there, but please don’t bump into any of them and please don’t knock them as you walk by and don’t poke them in the eyes as you put your arms out in front of you to try and find out where you are going. It’s kind of like a blindman kind of game. Initially, I think it was like that. I was feeling like I was blind and reaching out.”

Father Stephens is also the Vicar for St. Phillips in Belen and would live stream mass onto Facebook. Since the community is not allowed to attend in-person, it left Epiphany with a new problem to figure out – what they were going to do for Christmas mass.

In years past, the Epiphany was very lively on Christmas Eve with various music performances. Father Stephens said that the Unitarians and Luthans also use the church and would have events on Christmas Eve.

This year, there will still be live Folk Christmas music in Parish Hall, but people can only enjoy it through the live stream. After the music, Christmas Eve mass will begin at 6:30 p.m. as Father Stephens will be joined by Father Robert Mundy from St. Matthews in Los Lunas.

Father Stephens and Father Mundy will be doing mass from their own church, but will split it between themselves. They will also have members from all three churches doing the scripture readings.

Now, Father Munday and Father Stephens will have to figure out how to host a live stream from both churches that is also broadcasted to the churchgoers from all three.

“I think it will be beautiful for Christmas to have people from different locations reading readings, sharing the prayers and it will hopefully make it feel much more like Christmas is meant to feel — like we are a community even if we can’t touch each other, even if we can’t shake hands with each other,” Father Stephens said.

He also said that he feels like having to live stream Christmas mass will be a humbling experience.

Christmas Day mass will be live streamed from St. Matthews while mass on St. Stevens Day on Dec. 26 and for the Scripture of Carols on Jan. 2 will be from St. Phillips.

San Miguel Church also had to rearrange their Christmas mass plans. On Christmas Eve, they normally have a family mass at 5 p.m. and then midnight mass.

According to administration assistant Annie Anaya, the church will also be putting up less decorations. Normally San Miguel puts up many trees and has families and different groups come in to decorate them. There is also a nativity scene displayed on the altar. This year, only two trees will be decorated and placed with flowers on the altar along with a smaller nativity scene.

“It’s very limited because you don’t see that sense of community,” Anaya said. “It’s hollow. It’s a skeleton of servants. I know there are people listening or watching at home or outside of the church, but you miss that sense of the real presence of the birth of Christ, the portrayal and the scene of the Wise Men up there, Mary and Joseph.”

Since the pandemic started, Anaya said that San Miguel has held both in-person mass and live streamed mass. At times, the parish allowed 25 percent or 40 percent of capacity into the church for mass.

“When we were at 40 percent, it was a little challenging to keep people distanced,” Anaya said. “We did it for a while and then we got the announcement from the Archdiocese to cease in-person masses. We went strictly online.”

During mass, only five people are allowed into the church. For the weekend masses, three volunteers will come before mass and pray the rosary. After church, Father John Anasiudu will hand out communion to those who listened to mass from their cars in the parking lot.

Anaya said that those who want communion come to the church doors one at a time and are fully masked.

Anaya said she feels that the church is not reaching the amount of people they normally would if mass was inperson. She said a lot of the church members are elderly who do not have access to technology and San Miguel is “restricted from Good Sam” and is unable to visit the homebound.

“That has been a real sad thing, but to keep people safe, that is the only alternate that we had,” she said. “We are trying to reach as many people that we can through streaming our weekly and weekend masses.”

Epiphany has found the opposite, as Father Stephens said the church has been reaching significantly more people. He said their congregation had around 50 people before COVID-19 and close to 200 people have been watching the live streams on Facebook. Some people are also leaving messages on the live streams.

During the pandemic, Father Stephens and Epiphany have been working on ways to keep in touch with the church community.

“In terms of people, it has quite a significant emotional impact on people,” Father Stephens said. “People are finding it difficult to feel connected. The church itself has devised lots of different ways in which to try and remain connected.”

Every morning, members of the church pray live on the Facebook page and at noon different people Monday through Saturday live stream the Prayer of the Church. At 7:30 p.m. every day, Father Stephens does a night prayer on his personal Facebook page.

Epiphany has set up a pastoral team who calls church members every few weeks for socialization, to touch base and to ask if they have any concerns. The church has also continued their scripture studies on Zoom.

The Church of Christ declined to be interviewed and said that they will not be doing anything differently this year due to how small their congregation is. 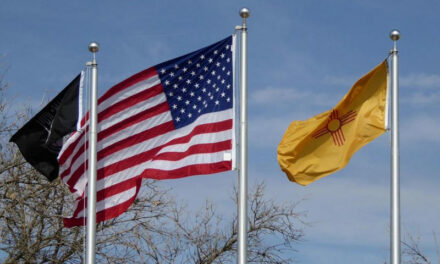