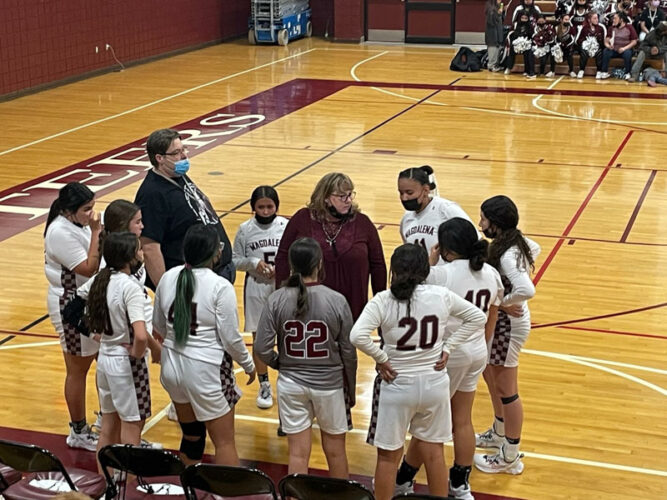 The annual Steers Stampede Basketball Tournament returned in 2021 after not being allowed to take place in 2020. Unfortunately, a fatal car crash placed a tragic blanket over the three-day event.

Among the two fatalities was Magdalena Steers varsity girls basketball coach Marleen Greenwood, who was on her way to the tournament. She began coaching during the 2019 season, taking over for former coach Boyd Lewis. Greenwood led the Lady Steers to a 33-11 record in the regular season, reaching the second round of the playoffs in 2020.

“This affected teams and everybody in the community,” Athletic Director Jory Mirabal said. “We had teams stranded and players not knowing how to react. Trying to help these players cope is the number one priority for us as a staff and as people. All of this right here is secondary when it comes to something like this happening.”

The Magdalena Steers released the following statement on social media:

“Things you will miss… Fiercely loyal friend, dedicated mom, sister, daughter and coach. We don’t know of anyone who attempted to do so much to so many. Shoes that can’t and wont be filled. The sound of her laugh will be missed in the halls and on the bus. We want to hear updates about her son Mason and his incredible accomplishments. Our kids and students need someone in their corner like her.”

“We need more teachers and coaches like her, not less. She won her final game coaching and as we parted ways who would have known that would be the last time. We did not realize this would be saying goodbye. She went out as a winner coaching her last game. More importantly she leaves all of us winners. An example of how to live your live with your eyes on God and your heart full of charity and service to others.”

After news of the tragedy hit the Magdalena campus Saturday, players got together and decided to play in honor of their coach. With the teams able to make it to the arena, the Lady Steers took home a victory against Carrizozo.

“Finishing off the final day for our team was a great way to commemorate their coach,” said Magdalena superintendent Glenn Haven. “It was a small way for them to take their minds off of things going on right now.”

The community still is in a state of shock, he said. An emergency administrative team meeting was held Sunday morning to discuss how to handle the situation. A SEL (Social Emotional Learning) team came together with teachers and staff to lay out how best to help the students. Counselors from other schools have also been providing their services for students.

“I’ve been busy walking the hallways and classrooms today just trying to take everything in,” said Haven. “If anyone needs further support people can contact my office as well as the principal’s office for any help needed.”

Assistant coaches Doug DeRosa and Amber Cearley will have the task of leading the Lady Steers going forward during the early season. 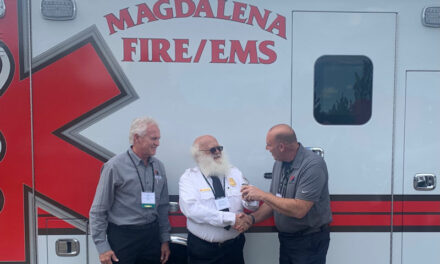