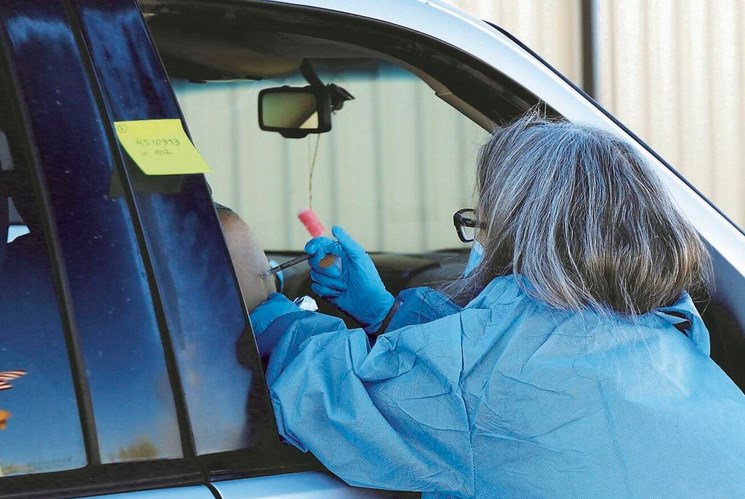 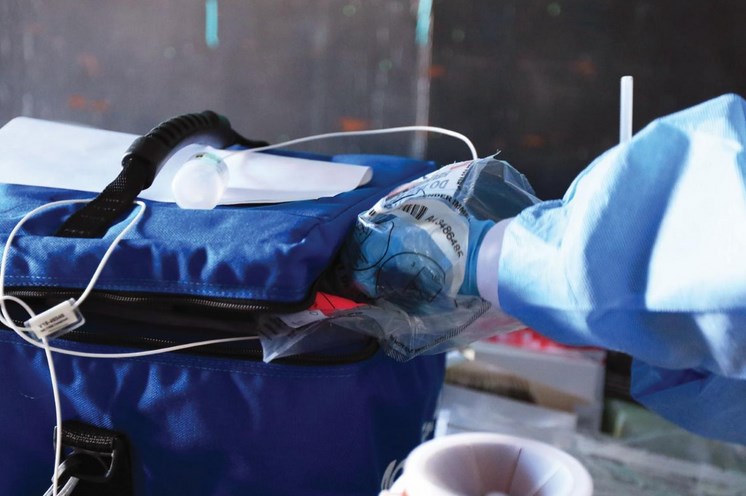 Broome sticks her hand in the vaccine cooler to take out a vial of the Pfizer vaccine and a vial of sodium chloride. The Pfizer vaccine has to stay at a certain temperature and needs to be refrigerated.
Caitie Ihrig | El Defensor Chieftain photo 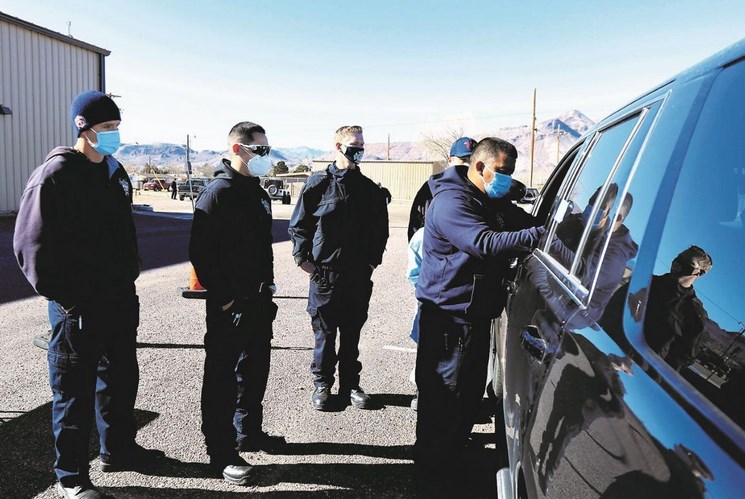 Dustin Aldrich, Ignacio Chavez, Leo Peterson and Matt Brannan of the Socorro Fire Department watch Lawrence Baca give a COVID-19 vaccine. They had to watch the vaccine being given before they were allowed to vaccinate patients.
Caitie Ihrig | El Defensor Chieftain photo 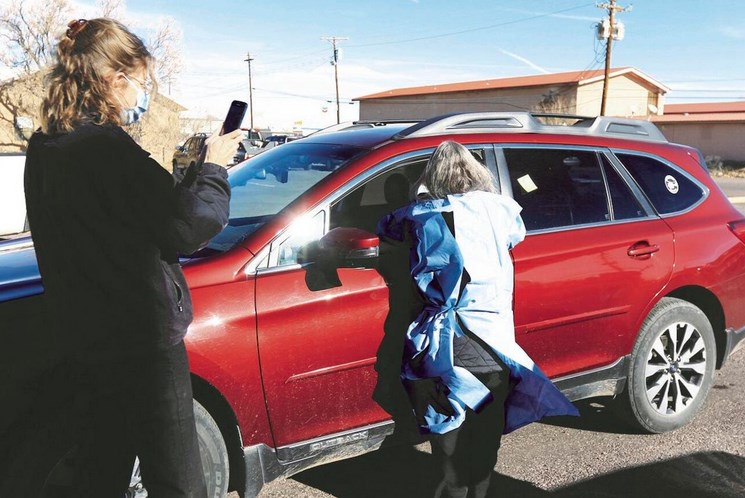 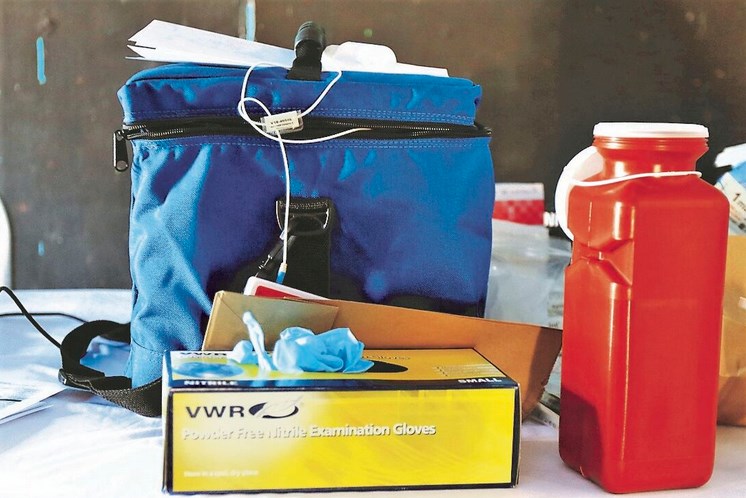 Inside the Teen Center, the Department of Health had a tent set up with a table to hold the vaccine cooler, gloves and a needle disposal container.
Caitie Ihrig | El Defensor Chieftain photo 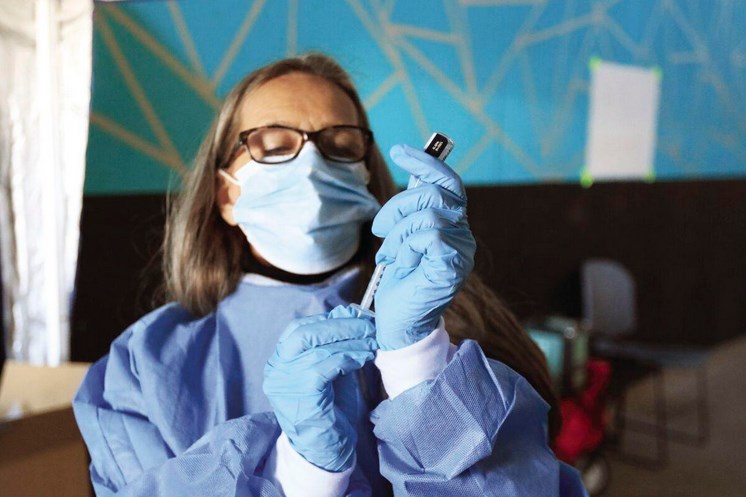 After the ingredients are mixed together, Broome puts 0.3 ml. into a retractable needle. Each vial makes five vaccines and Broome made roughly 55 vaccines on Jan. 7.
Caitie Ihrig | El Defensor Chieftain photo 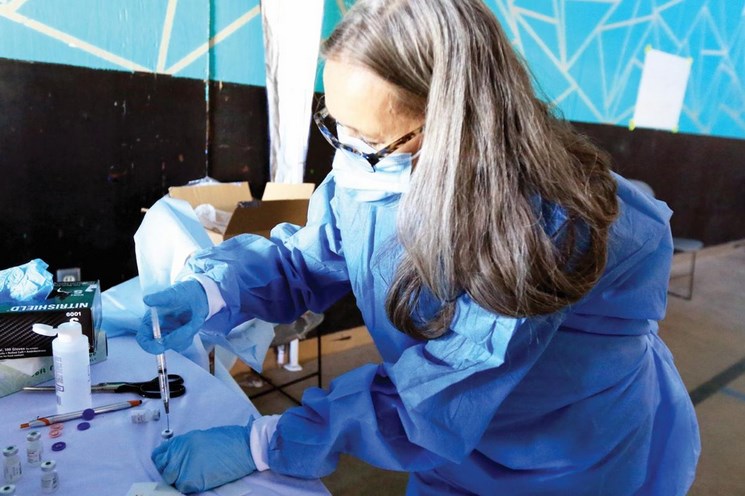 Broome injects 0.9 ml. of sodium chloride into the Pfizer vaccine vial. The vial is then turned upside down 10 times to mix the vaccine with the sodium chloride.
Caitie Ihrig | El Defensor Chieftain photo
On Saturday night, Leroy Place was lit up with around 1,000 luminarias.

While the City of Socorro was not holding any of their holiday events due to the coronavirus, New Mexico Tech decided to still hold their Light the Night Luminaria Display.

“When you think of the holidays, you want to come together and you want to be joyous and be able to see all the people that you don’t normally see,” NMT event coordinator Sandi Luero said. “It’s humbling in a way because you end up being grateful for what you have and for the normal times. Not being able to be around people is the hard part.”

In past years, Socorro County would do a hayride from the Plaza to Tech after the Electrical Light Parade. As people arrive at Tech, they used to be given hot chocolate and cookies to enjoy as they look at the luminarias.

“That’s part of the fun — getting to see the people who come on the hayride and spread the cheer and see all the happy faces,” Lucero said.

This year, the display was a drive-through event to help combat the coronavirus and follow the state health orders. Lucero said that this is one of the easier events they do as the Rising Star Dance Studio using the luminarias as a fundraiser. Rising Star will fill the brown paper bags with sand and put a candle in each one.

On the day of the display, they also put out all of the bags on Leroy Place. That afternoon, Lucero and a few helpers will go around and light all of the luminarias.

“It’s pretty simple,” she said. “It’s a lot because there’s close to 1,000 luminarias. It takes a bit of time, but there’s quite a few of us who do it. We also set up the inflatables. It probably takes us an hour to an hour-and-a-half to set it up.”

Lucero said there are about 15 inflatables that get blown up each year which include snowmen, Santas and reindeer. Light the Night was three hours long on Saturday and due to high winds, the inflatables kept falling over.

While the event was drive-by, there were a few people who decided to walk it and would fix the inflatables as they went by.

The road had a line of cars during the event as it is something that the community looks forward to each holiday season.

“It’s important for the community to know that Tech is here and that we stand with the community,” Lucero said. “This is just a way for us to light the night and shine some light on these dark times and bring holiday cheer as we normally do.”