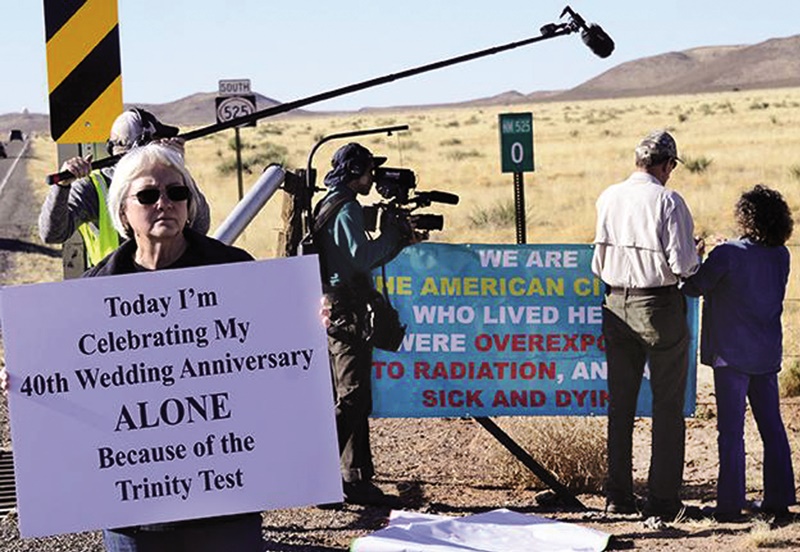 Everyone either took a photo of a friend or a selfie at the obelisk, where the bomb was detonated on July 16, 1945.
Gary Herron | Rio Rancho Observer

Visitors from dozens of states, if license plates in the parking lot at the Trinity Site were any indication, were interested in visiting one of New Mexico’s iconic places … one that is only open to the public twice a year.

The Trinity Site is where scientists tested the atomic bomb, before President Harry Truman decided to have two of them dropped on Hiroshima and Nagasaki, Japan, in August 1945.

But more than just millions of lives were destroyed in Japan, and an estimated 250,000 Americans saved, by the dropping of those two atomic bombs that summer.

Countless other lives were affected and lost by the radiation cloud that ensued when the bomb was tested early on the morning of July 16, 1945, at the Trinity Site, north of Alamogordo.

Several generations of them are in southern New Mexico — still trying to receive compensation from the U.S. government for their failing health.

Those driving their cars, SUVs, RVs and motorcycles into the site on the White Sands Missile Range couldn’t help but see signs calling attention to radiation exposure that some of them and their loved ones had suffered. Many died.

The Tularosa Basin Downwinders Consortium (TBDC) was formed as a grassroots organization in 2005, primarily to bring attention to the negative health effects – mostly myriad varieties of cancer – suffered by people living adjacent to the Trinity test site who were exposed to high levels of ionizing radiation after that test.

What TBDC wants people to know – and there were members and Downwinders carrying signs at both entrance gates to the Trinity Site when it was opened to visitors on April 2 – is that thousands of families lived within a 50-mile radius of the explosion. Their water, crops, animals and more were affected by the fallout.

Downwinders who lived close to the Nevada Test Site have received partial restitution and medical care through the Radiation Compensation Exposure Act (RECA), while none of the Downwinders in New Mexico have. The Nevada Test Site, 65 miles north of Las Vegas, was one of the most significant nuclear weapons test sites in the U.S., with nuclear atmospheric and underground testing occurring there between 1951 and 1992. 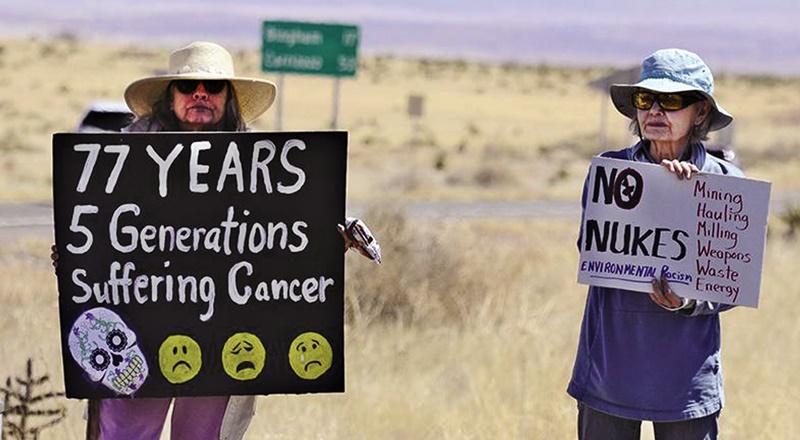 TBDC has been staging at the Trinity Site gates for eight years, said Tina Cordova, a co-founder of the TBDC. Born in 1959, although she had thyroid cancer, “My family has pretty much been spared,” she said.

But, she added, “We’ve documented entire families that have died from cancer.”

“We want to preserve the history of the people in New Mexico who are literally sacrificing the process of testing the bomb at the Trinity Site,” she said, acknowledging dropping the bombs over Japan shortened World War II and saved an estimated 250,000 American servicemen’s live. But she added: “We’ve got to look at it from a different lens now.

“We want to make sure the government has to understand that they have to come back and take care of the American citizens that were harmed here and sacrificed in the process of this test,” Cordova said. “We know that many people are going to say it’s going to cost too much to add the Downwinders of New Mexico to (RECA), but we say, ‘No way, that’s not a fair answer,’ because our government spends $50 billion a year just maintaining our nuclear arsenal, putting our nuclear arsenal to bed every night – not building a new bomb, not building a new plutonium pit – just essentially putting our nukes to bed at night. They’ve paid out $2.5 billion to RECA over 32 years — there’s no way that is balanced.”

Cordova added that they want the federal government to be aware that New Mexicans “are going to stand up and ask for them to add us to RECA, and do that before the RECA Bill sets in July of this year.”

In June 2018, TBDC testified before the U.S. Senate Judiciary Committee about the need to amend RECA so New Mexicans can also be compensated. Last September, under the bipartisan leadership of Sen. Ben Ray Lujan of New Mexico and Sen. Mike Crapo of Idaho, Senate Bill 2798 was introduced to extend and expand RECA to finally include New Mexico.

Those suggested amendments to RECA will soon be introduced and move out of committees and onto the floor in the U.S. House and Senate for votes.

If passed, those bills will:

Cordova hopes sympathizers will contact their Congressional representatives and ask them to support HR-5338 and SB-2798.

To learn more about the Downwinders, visit trinitydownwinders.com.

Trinity Site is open for the second and final time of the year on Saturday, Oct. 1. For more information, visit wsmr.army.mil/trinity. The Stallion Gate entrance is 12 miles east of San Antonio, reached via exit 139 on I-25.