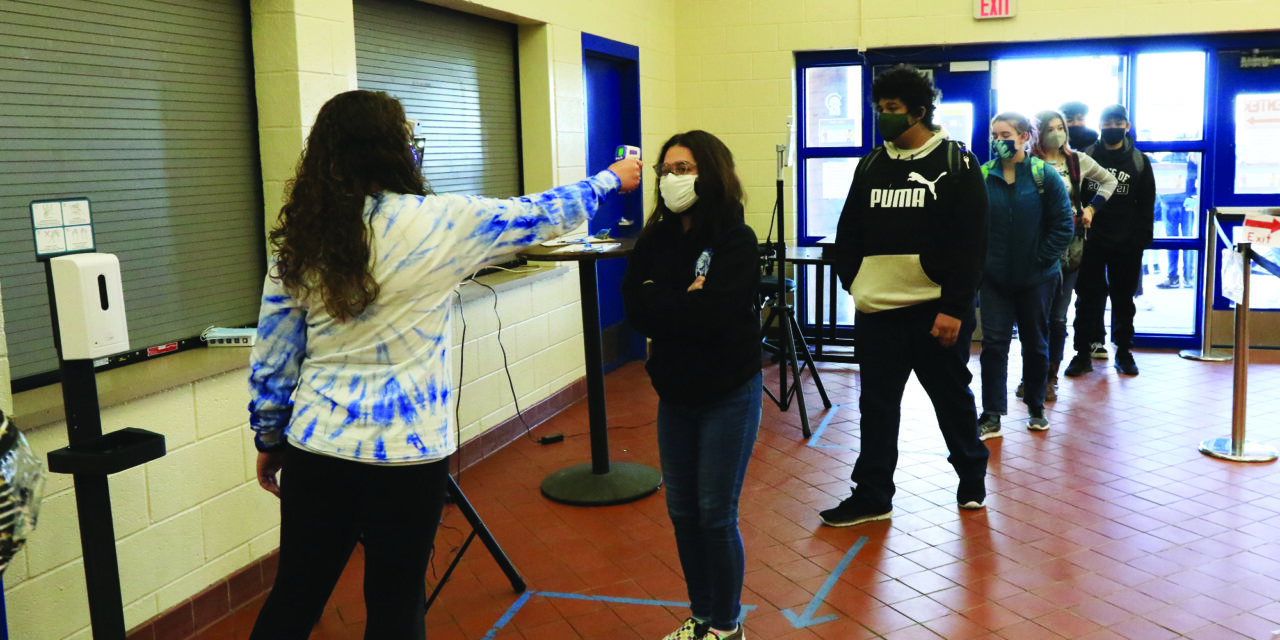 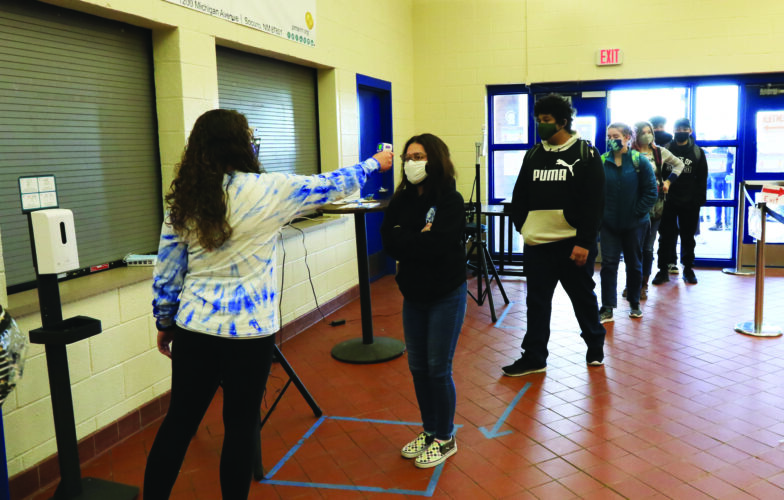 Students at Socorro High School have their temperature taken when entering school each morning. Socorro superintendent Ronald Hendrix said the temperature check did not catch any of the COVID-19 cases at the school.
Caitie Ihrig | El Defensor Chieftain photo

Socorro High School announced on April 13 that in-person learning is moved to virtual learning until April 26 due to an outbreak of COVID-19 cases at the school.

The outbreak came from sports, activities, and weekend gatherings that students attended.

According to Superintendent Ronald Hendrix, the first few cases are related to the girls’ soccer team and were confirmed on April 9, the day after the state championship game.

“We’ve been told that\ there was a quinceanera and a football party over the weekend (of April 10 and 11),” Hendrix said on Friday. “A lot of these kids went to it. Now, we have 21 cases at the high school. When I look at the cases and compare them to the contact list of the ones who look like they went to the weekend stuff, that’s where it looks like it came from.”

None of the cases at the high school are from remote learners.

At an emergency school board meeting on April 19, Hendrix said 24 of Socorro County’s 42 cases are within the school district.

The county had five or fewer new cases each day since April 9, the first day of a confirmed case within the district, except for April 14 when there was 21, and nine on April 19. All cases within a school district must be reported to the Department of Health and the Public Education Department. Hendrix said that besides the student cases at the high school, there is one teacher at the high school, one student at Sarracino Middle School, and a teacher at Parkview Elementary who has COVID-19. When the case was discovered at Parkview Elementary, the class was told to quarantine and they were allowed to return to in-person learning on April 20.

“We are trying to be as vigilant as we can,” Parkview principal Laurie Ocampo said during the meeting. “We put out a video today (Monday) about social distancing. I remind students and staff every single day. We just want everybody to be safe. We are watching it very, very carefully. We have layers of protection.”

Ocampo said Parkview is doing temperature checks, social distancing, everyone has to bring their own water bottle to school and no one is allowed in the bathroom if someone else is in there.

Hendrix told the board that the high school has also been doing temperature checks, but it did not catch any of the COVID-19 cases.

To avoid a future outbreak, the high school and middle school will be rapid testing students every Monday morning. Hendrix said if an outbreak starts at the elementary school then they will also test those students weekly, but as of Monday, it will just be elementary students whose parents want them to be tested.

Hendrix said there are two or three staff members at each school who are trained to do the rapid testing. Besides being tested on Monday mornings, student-athletes will be tested before each contest and must have a negative test to play. Hendrix said testing is required for participation in sports.

According to Hendrix, the PED asked that 1 percent of the students are tested each week.

The board also discussed having fans show their COVID-19 vaccination card before being allowed in to watch a game to make sure there is no spread between fans or from fans to players. There was discussion about letting people into the game who have already had COVID- 19 and have the antibodies.

“Best thing is to default to the CDC guidelines and to my knowledge, CDC has not said anything about anyone who has had COVID-19 and we would have no way to validate that,” Hendrix said during the meeting. “At least with the vaccination card, it’s something everyone has and is something we can accept.”

Even though the school is currently closed, the boys and girls basketball teams will be competing in their games this week. They will play Hatch Valley on Thursday and Cobre on Saturday.

“Our school is closed and we are allowing this because we want our kids to be able to play in a state contest,” Hendrix said during the meeting. “I believe they have missed too much already this year and I don’t want that taken away from them if there is some way to do it.”

Hendrix told the board that he discussed letting the athletes play this week with NMAA Executive Director Sally Marquez who told him that as long as the athletes test negative they could play.

Sports at the middle school had to be canceled because the high school students referee the games.

“The thing that we really need to get through the kid’s heads is that we make them wear their masks at school, make sure they are distancing properly and they can be within three feet now, but we are watching them pretty carefully,” Hendrix said on Friday. “I can’t control what they do on the weekend. We have to ask them to care about their school and their athletic seasons as much as we do.”

Due to the outbreak, the prom had to be rescheduled and students will be required to test negative at the door before they are allowed in.

The school board is also unsure what will happen with graduation because the color the county is in will determine how many people are allowed to attend.
Besides impacting activities within the school district, the outbreak is impacting the City of Socorro.

According to Mayor Ravi Bhasker there are city employees in mandatory quarantine because their children have COVID-19. He has also received messages from already struggling restaurants about the economic impact the outbreak will have. Bhasker said restaurant owners have told him that they don’t have the workers to cover shifts for those who have to quarantine and are worried about having to lay off staff again.

“It just feels like we made this huge leap to doing really well and then we backslid,” Bhasker said 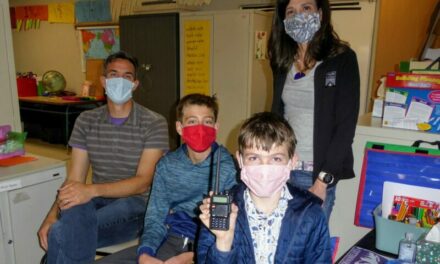 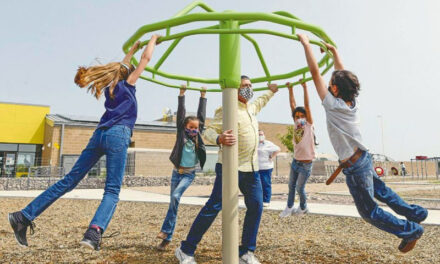