Correction: The county commissioners were considering additional pay of some kind for employees for working during the pandemic, not necessarily incentive pay.

The Socorro County Commissioners are trying to reallocate some of the county’s American Rescue Plan funds to offer county employees additional pay for working during the pandemic, following the lead of the Socorro School Board and Socorro’s City Council.

The county commissioners had already allocated all of the $1.6 million the county received in the first half of ARP funds. The county will receive a total of $3.2 million. The second half should come in spring 2022. The federal funds are meant to help the community recover from COVID-19 and can be spent on a wide range of things. The commissioners have allocated ARP funds for everything from cybersecurity to road projects to the county vaccine raffle.

However, last week the commissioners discussed reallocating some of that $1.6 million to employee pay, to recognize county employees for working through the pandemic. Both the City of Socorro and the Socorro School Board have allocated significant ARP funds to employee pay, which the commission initially declined to do.

Commissioner Manuel Anaya said that after having conversations with other commissioners around the state, he realized that Socorro County has allocated far more funds than most counties to directly assist local businesses. Anaya said he believed that to “make it right” the commission should try to dedicate $500,000 towards additional employee pay, the same amount that has been allocated for grants to assist local businesses.

Multiple county department heads advocated for additional pay for their staff, pointing out that county staff had to figure out how to provide services safely to the community despite the pandemic.

“I know my staff, they see other people getting compensated and they kind of, heads hang differently,” said detention center administrator Eddie Garcia. “At the same time, we’re short-staffed, but I commend my staff. They work overtime and a lot of times they don’t want to do it, but they’ve got mouths to feed at home and they suck up their pride and they do it.”

County Manager Michael Hawkes said he believes he can find $200,000 from the already allocated ARP funds that will not be needed for the purpose it was allocated and potentially re-designate it for employee premium pay by November. There may be more allocated to the widowers and widows fund and the vaccine raffle than needed, said Hawkes, and some projects may be delayed because of supply chain issues. Then the commission could allocate $300,000 from the second half of the funding toward additional employee  pay in the spring, for a total of $500,000.

All of the commissioners present at the meeting, Anaya, Joe Gonzales, Craig Secatero and Ray Martinez, were supportive of allocating ARP funds for employee pay.

Sheriff William Armijo was frustrated by this suggestion.

“Shame on you if you’re going to even consider giving somebody who’s vaccinated more than the other employees who put in just as much work as anybody else,” said Armijo.

Hawkes will give the commissioners a breakdown of how much funding is available and where else employee premium pay funding could come from at their next regular meeting. 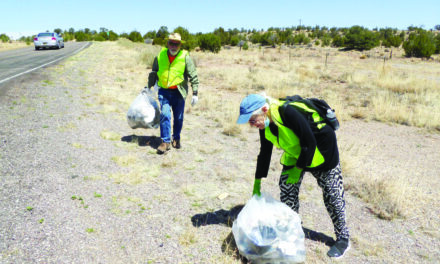