ROBERT DALE BLANTON of Socorro will join a group of 100 FFA members from across the nation to provide music and entertainment for more than 2,000 attendees at the 44th annual National Convention of the Future Farmers of America. The 15-year-old son of Mr. and Mrs. William Blanton was selected to be a participant of the FFA Chorus, which includes members from more than 35 states. Selected through various recommendations, Blanton will arrive in Kansas City this weekend as the group practices before a Tuesday performance.

THREE SOCORRO YOUTHS departed for Navy Recruit Training, taking place in San Diego, Calif., and in Orlando, Fla. George Louis Lucero is off to Orlando for nine weeks. Joe “C” Montoya and Andres Anaya are headed to San Diego for the same nine-week course. More than 60,000 recruits are trained annually at these two recruit centers. A high percentage of the graduates go on to continue their education at technical schools.

GRAND OPENING of Martin’s Auto Supply on October 6 and 7. Door prizes. Winners need not be present. Coffee and doughnuts for the adults. Balloons and suckers for the kiddies. Everyone is welcome. Get acquainted with Frank and James Martin and their automotive parts store.

THE DAREDEVIL extraordinaire Evil Knievel is coming to the big screen this week. The Loma Theater will be showing the biography of the same name twice nightly through Saturday. The film stars George Hamilton and Sue Lyon. The movie poster’s catchphrase reads “Hell, I’m the best… The last of the Daredevils… My death – IT WILL BE GLORIOUS!”

A JUNIOR Rodeo Association has been organized at Magdalena’s high school. Jimmy Green was elected president and Mr. Jack Valentine will represent the group as a sponsor.

DEFENSOR CHIEFTAIN presented Antoinette Rivera, daughter of Mr. and Mrs. Placido Rivera, with a check from Chieftain writer Diana Drummond. Rivera found and returned a silver watch that she found at Clarke football field. The check came from the grateful owner Mrs. Bonnett from the Albuquerque Academy.

ANIMALS ARE AMAZING essay contest winner was announced at the Socorro Public Library. First-grader Shelley Rice from Midway School took home first place. The essays entered into the competition ranged from cats to Australian lizards. Rice says the proceeds will go toward programs at the school.

WARRIORS BREAK RECORDS on their way to a 5-0 start during homecoming, beating Kirtland 47-27. Quarterback Damien Ocampo broke the school passing record previously held by Bill Ramsey in a single half as he had 244 yards through the air in just two quarters.

THE NEW MEXICO Symphony Orchestra is returning to perform here in Socorro. Conductor David Lockington and the group of talented musicians will play Friday at the New Mexico Tech Macey Center. Highlighting the performance will be a full rendition of Beethoven’s Symphony No. 5 in c Minor.

APOLLO ASTRONAUT Dr. Harrison H. “Jack” Schmitt will be the featured keynote speaker during Socorro’s third annual Enchanted Skies Star Party. Professional scientists, as well as space enthusiasts from across the country, are expected to be on hand. The event will go from October 10-13, with a chuck-wagon dinner at a real Southwestern ranch. From there large telescopes will be available to take in the night sky. A guided tour at the Very Large Array is also included.

BOXING RETURNS to Socorro. After a two-year absence, the Socorro Boxing Club is ready for a fight. Members will compete in the amateur Fred Esquivel Invitational at Albuquerque’s Barelas Community Center. Coach Joseph Gonzales will bring 15 fighters from Socorro for the event.

ALAMO STUDENT winners will be showing off their work in an exhibit this week at Alamo Navajo Community School. The students won blue ribbons for their presentations in computer sciences at the County Fair. Eight students in total will have their award-winning projects in the library for people to come and learn from.

CODE TALKERS were honored during a ribbon-cutting ceremony. Alamo Navajo Community Schools dedicated its library to the former war heroes. Chester Nez, the surviving member of the original 29 code talkers from WWII did the honors of cutting the ribbon. The soldiers played a pivotal role during the war, communicating critical messages between U.S. forces in multiple countries.

100 YEARS of the historic “M” logo that sits atop the mountain behind New Mexico Tech will be celebrated with the annual painting of the “M”. This will mark the first time all Socorro residents will be welcome to join in on the painting ceremony. Students and residents willing to make the climb will receive commemorative t-shirts, sunglasses and hats.

B.J. LESPERANCE has won for a second time as her design will be featured on the 2011 SocorroFest t-shirts. Her design depicts a bright sunflower guitar, highlighting the talented musicians performing over the weekend. Lesperance is a local artist and her acrylic paintings can often be seen hanging in Sofia’s Kitchen. She went professional in the art world in 2005. 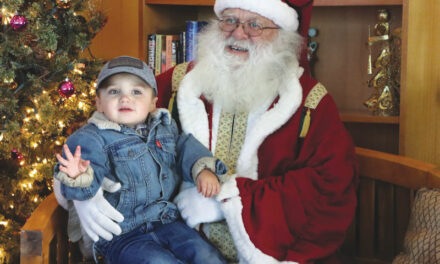 Letters to Santa from area children 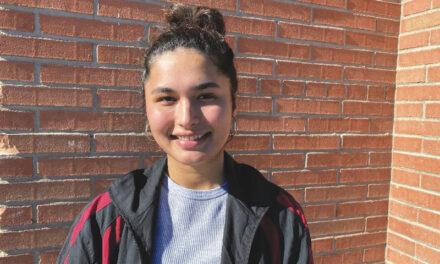