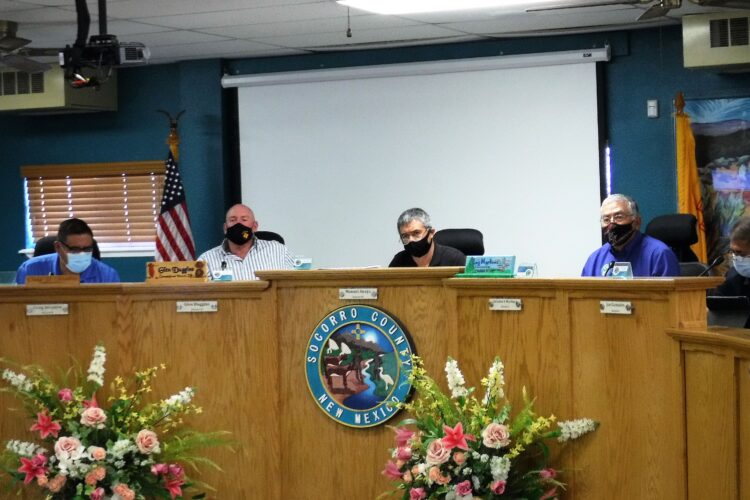 Recent recommendations by managers of state water agencies in New Mexico have caused concern for farmers and county officials in Socorro County.

On Tuesday, the Socorro County Board of Commissioners approved Resolution 2021-32 which voices its opposition to the Partial Season Leasing Program of the Middle Rio Grande Conservancy District.

A less than desirable Rio Grande stream forecast for 2021 has prompted Interstate Stream Commission and State Engineer John D’Antonio Jr. to issue a report telling farmers not to farm unless they “absolutely need to farm.” D’Antonio also said the drought is shaping up to be as severe as the conditions the state experienced in the 1950s.

“Farming is such a huge part of the county. That’s why I wanted to bring it to the commission,” District IV Commissioner and former MRGCD board member Glen Duggins said.

However, New Mexico faces a substantial water debt to Texas, and continued drought conditions are taking their toll. Interstate Stream Commission Director Rolf SchmidtPetersen recommended in a staff report at the beginning of February, “that farmers along the Rio Chama and in the Middle Valley that don’t absolutely need to farm this year, do not farm.”

The MRGCD cut its 2020 irrigation season a month short because there wasn’t enough water to go around. A shorter season also helped deliver some river water to the reservoir as part of New Mexico’s Rio Grande Compact obligations.

The state believes a drier 2021 could prompt farmers to repair irrigation systems, practice fallowing to let their fields rest for a year, or plant fewer “thirsty” crops, hence, the Partial Season Leasing Program, designed to financially compensate irrigators to voluntarily suspend irrigation water delivery for part of the growing season. The purpose of which is to reduce river diversions and consumptive use of water for forage and other crops during a time when the yield is typically low. 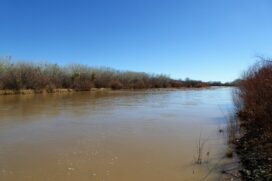 The Rio Grande at Socorro’s Otero Park on Monday. Stream flow forecasters say the river will not be able to supply enough water for a normal irrigation season.
John Larson | El Defensor Chieftain

But Duggins contends that “farming is a lot more than just planting seeds in the dirt.

“When you idle a farm down, the fact of it coming back is very slim,” he said in a telephone interview. “A farmer that produces, that makes a living at it, he can’t stop. How can he? Like you have an alfalfa field that’s good for six or seven years. If you stop, you’re going to lose that investment.

“We have no farmers on the (MRGCD) board,” Duggins said. “Two or three of them claim they are farmers. But they’re not. Anybody with a set of hens and a bucket of tomatoes is gonna’ raise their hands, ‘I’m a farmer.’”

In January, the MRGCD board voted to delay the start of the 2021 season until April 1, a month later than usual.

“And now they’re wanting to cut it another month on the other end,” Duggins said. “That’s 60 days out of our season.

“There’s a lot the conservancy could do. They could clean the drain ditches all the way up the system that would produce a lot of water down here in the south. But that’s not their focus.

“This river has gone dry all through history. It’s not a continuously flowing river, never has been,” Duggins said. “We as farmers work with what we have. We have to deal with all of the mother nature problems. We know what we’re looking at. We know what we’re facing. And we’re best to make our decisions.”

Duggins currently relies on pumping to meet the needs of his 400-acre farm and admits it’s an expensive and impermanent solution to the greater problem.

“There’s about three of us back here where I farm that have agreed to help each other with pumping, and we’re gonna make it,” he said. “It’s just gonna’ be
more expensive.”