A STRAY HORSE on I-25 after dark caused damage to two passenger cars. The first accident occurred when a 1965 Studebaker collided with a horse in the middle of the highway, felling the horse which was tossed over the top of the car. Moments later, another driver hit the dead horse on the highway which caused minor damage to his car, with headlights broken and radiators and grill damaged. Prior to the accidents, the owner was searching for the horse.

THE SOCORRO WARRIORS found an easy prey in the Truth or Consequences Tigers as they blanked the visitors 27-0. The win was the third of the season for the Socorroans with only one tie marring their worksheet, a 14-14 deadlock with Ruidoso.

ADOLPH COORS COMPANY’S aluminum collection program topped a historic milestone this week with the announcement that the billionth can has been recovered for recycling. Preliminary reports from the regional brewery’s 166 distributors in 11 western states show that approximately 43 million pounds of aluminum-equivalent to 1,032,000,000 containers at an average of 24 cans per pound have been turned in since inception of the cash-for-cans program in January 1970.

DOWNPOUR. Socorro was showered with 3.74 inches of rain over the weekend, just as summer turned to fall. The downpour caused the cancellation of Tresco’s Love Affair Golf Tournament and two Fat Tire Fiesta events and resulted in rain-soaked city streets and muddy county roads. As precipitation filled rushing arroyos and daytime temperatures dropped into the low 70s, Socorroans were alerted to flash-flood alerts for the state on television.

A SOCORRO WOMAN has received an award given to single mothers furthering their education. LouAnn Griego won the 1997 training awards program, or TAP, sponsored by the Soroptimist International of the Sandias in Albuquerque. Griego also received a cash donation and attended a banquet. Griego commutes to Albuquerque daily to attend the Pima Medical Institute. She is enrolled in the radiography program. TAP winners are chosen for outstanding accomplishments and their dedication to advance their education.

FIRE DEPARTMENT BURGLED. Friday night, Sept. 7, someone peeled the metal from the side of the Abeytas Fire Department and helped themselves to close to $5,000 of equipment. Kelly Voris, Abeytas fire chief, is asking the community to please let the authorities know if they notice anything suspicious near any fire department. He believes someone may be targeting fire departments for break-ins. On Sept. 4, The Rio Grande Estates Fire department was broken into. They opened the back wall and kicked in the sheetrock. Earlier in the summer a similar break in occurred at the Peralta Fire Station.

SOCORRO’S 2011 COUNTY FAIR QUEEN Leslie Ramzel placed second in the State Fair queen competition. As a competitor to claim the title for queen, she had to speak to the audience, demonstrate her riding abilities, carry flags and do what the judges asked of her. Fifty percent of what the judges were looking for was horsemanship, she had to ride around a set pattern for two days, and perform a freestyle with her horse. For the personality aspect, she had a personal interview, gave a speech, modeled a dress and performed impromptu. She also had to take a test with 15 written questions. Five questions were on rodeo, five on New Mexico and five on the state fair. 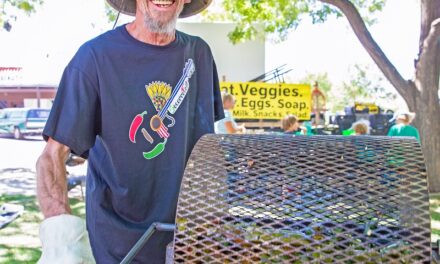