THE FIRST ANNUAL Holm O. Bursum Jr. Amateur Golf Tournament will take place Saturday, November 13, at the Tech golf course. Pro-golfer Jimmy Russell stated “This is a unique event in that there are not a large number of players, but these are the best in the state. Mr. Bursum is being honored for having contributed so much to golf in this area.” Tee-time begins at 10 a.m. The winning pro will receive $200. The winning amateur will receive a $200 purse of prizes. A traveling Holm Bursum award plaque will be given to the winning team of golfers.

A NEW AMBULANCE has met state specifications and was presented to the community. The Zephyr ambulance meets more than state requirements with its many features to assist the medical technicians who are trained to operate the vehicle. Medical technicians Al Branch, Dan Homan, and Leila Miller took their training several months ago for service. Patrick Woodridge who took Emergency Medical Training in August in Santa Fe was included with Advanced Red Cross First Aid training. All three young men will take tests for the National Registry of Emergency Technicians next month.

LOMA THEATER will be showing “THX 1138,” a new sci-fi adventure this weekend. The cutline states “Visit the future where escape is the ultimate crime.” Robert Duvall is the star of this early George Lucas directed movie.

VOTING MACHINES are a topic for debate. Long lines for early voting, a heavy absentee ballot vote tally, and the growth of several precincts in town show a need for additional voting machines, say county officials. “We are looking to buy 10 more voting machines,” said Joseph Vallejos, acting County Manager. He estimated the cost for the new machines would be $3,000 per machine for a total of $30,000. If the 1996 general election is any indication, the early voting option is popular and here to stay. Two voting machines were set up this year in the clerk’s office, but “we’re hoping for a third one” said clerk Audrey Jaramillo.

WARRIORS CHAMPIONS during its Saturday State Championship game. The sprawling campus at Albuquerque Academy was not an intimidating factor for the visiting Warriors team and its fans. Ask any of the fans who watched the game and visited with one another on the beautiful campus. It brought to mind the 1980s movie “Hoosiers” (different sport, parallel mood), when in 1956 a team from a small school walks into an arena in Indianapolis to play for the state championship. Socorro walked away with the win.

MADD ACTIVIST Nadine Milford gave an emotional speech in front of a packed audience during a community meeting at the Socorro Senior Center. Her goal was to help prevent another tragic DWI accident from happening. The community meeting was organized to help heal after the September 28 crash that killed Liz Meyers, 30, and her children Madalyn Meyers, 10, April Santillanes, 8, and niece Francine Meyers, 14. Monica Lucero read a poem during the event in honor of the victims.

VOLUNTEER LIBRARIAN  for 11 years, Martha Carangelo, is officially retiring from the Rio Abajo Community Library. From the beginning, Carangelo embarked on a mission to bring something special to her community. Her determination was to bring books to small communities like Socorro. “We were very unorganized at first, but in 2004 we got our charter from the state as a non-profit that helped us grow.” She, along with several other women around the community, were always determined to bring books to Socorro.

TWO ARSENIC facilities are under construction. The City of Socorro broke ground last month on two separate arsenic treatment facilities, one at the Socorro Springs Water Source. After years of trying to come up with a workable solution that would reduce the arsenic in Socorro’s drinking water to meet EPA standards, the end is in sight. “Vote Bhasker and all of the council out in the next election,” says a small black and white flyer on the side of an undisclosed van driving around Socorro with a skull-and-crossbones symbol stating “Socorro Water Kills.” 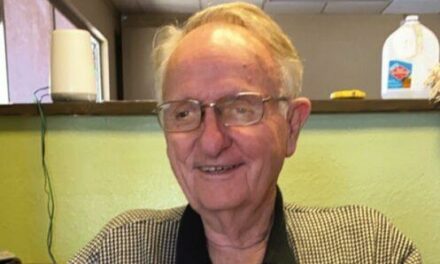 Wright hopes to help those in need 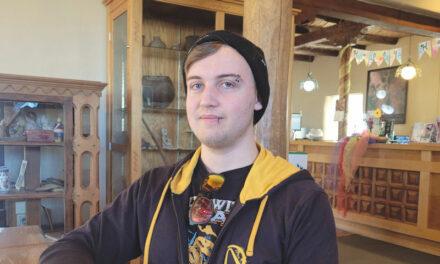 If you want to skateboard learn to fall, says McFadden