Home » Top Stories » The town that never was…can be yours for $1.6 million 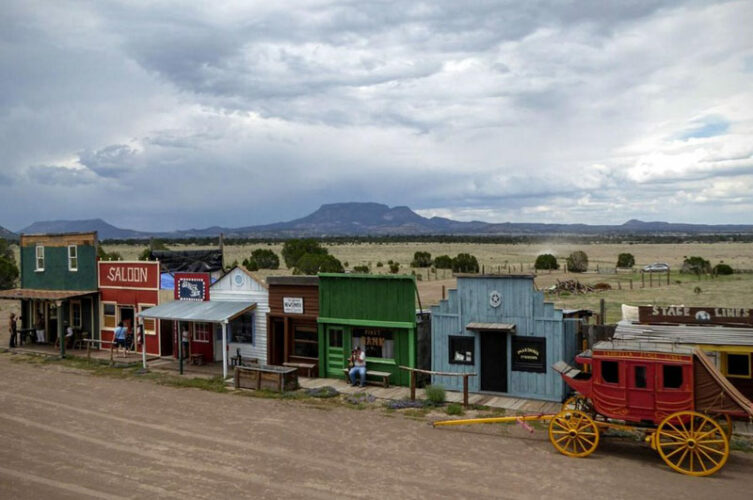 Nestled away back on the slopes of the Datil Mountains is not something one traveling the back roads of Catron County would expect to see, an authentic-looking Old West town, complete with hotel, saloon, courthouse and even a church, all reminiscent of classic television and movie westerns.

The “ghost town” of Gabriella takes up the better part of 58 acres between Datil and Horse Springs off Highway 12 in the Tipi Ranches area. And you can own it lock, stock, horse troughs and stagecoach for only $1.6 million.

The listing agent is David Cordova of Sotheby’s International Realty.

Gabriella is a re-creation of a typical Old West town, complete with hotel, saloon, courthouse, and storefronts, all reminiscent of classic television and movie westerns. The town is the culmination of a life-long dream of Larry Iams, a California transplant who relocated to New Mexico 14 years ago, along with his wife Janet “Missy” Iams.

It took over five years to build it himself with the help of a friend.

“I wanted to do this for years but never was in a position to do it,” Iams said on its completion in 2016. “We’ve got to keep history alive or nobody’s gonna’ know anything about anything.”

The Iams’s left California in 2006 in search of the perfect spot to start building their own town and ended up with the 128-acre spread off Highway 12 between Datil and Horse Springs.

“The town was partly conceived as a setting for a gunfight group,” Iams said.

He did most of the construction by himself, “and I had 400 pounds of nails to prove it,” he says. The only help he received were friends helping to put up the trusses for the church/courthouse and two-story hotel.

“This is all me and a friend of mine, he helped me over the years,” Iams said.

His friend is Salvatore Zagra, who came to New Mexico from eastern Pennsylvania, “to get away from the noise of the big city.” Zagra said he grew up watching westerns on TV and finally had the opportunity to check off one of the items on his bucket list, which was to move west, buy a horse and break it himself.

“And that’s what I did,” Zagra said.
Gabriella-Larry Iams

Part of the fun for Iams and Zagra was to don old west gunfighter gear and enjoy posing for visitors up and down Gabriella’s main street. 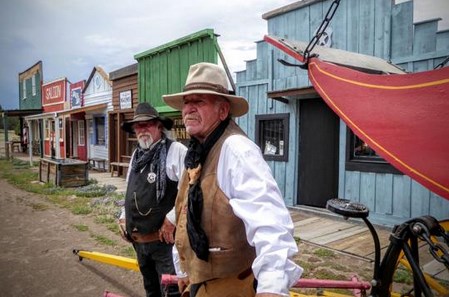 In all, there are over a dozen separate buildings representing, besides the hotel and church, a post office, leatherworker, marshal’s office with jail, grocery store, doctor, barbershop, two saloons, photography studio, newspaper office, bank, blacksmith, general store, dance hall, stagecoach ticket office, a shooting iron shop and a log cabin at the end of the street.

Iams noted that Netflix is already investing in the area, looking at studio expansions within the state of New Mexico, and that Gabriella boasts more than facades; they are complete buildings.

“This has all been a do it yourself project. I got a lot of timber from B.W. Cox and a guy from California brought me a whole truckload of windows,” Iams said.

Like many others who are committed to keeping American history of the west alive, Iams has strived to stay as close to what it was like in the 1800s, even to the extent of finding period-correct wallpaper and the acquisition of a fully-functional historical barber chair from Tombstone, Arizona, for the barbershop.

“There are many ideas on how people interpret what a western town is. For some reason, it sorta’ comes natural to me,” he said. “I never liked Hollywood versions of the Old West.”

Iams was previously part of a gunfight reenactment troupe called the High Plains Outlaws, which performed gunfighter skits at the plaza in Socorro and Old Timers in Magdalena, among other places. “But the group sort of dissolved a while back.”

“Cowboying is technically my first love,” said Iams, who was a wrangler in Mangus, Colorado in the 1990s. “I’ve had horses since I was 10 years old. Used to ride every day, all the time.”

Why the name Gabriella?

“Gabriella is the name of my granddaughter, who died in infancy,” Iams said. “I wanted to memorialize her by building this town in her name.”

As one visitor commented on Facebook, “South of Datil, in the middle of nowhere, Catron County is this little gem. It’s a work in progress and a true labor of love by a couple of crazy old guys who are handcrafting this thing because they just have a passion. Pretty much qualifies as magic in my book. Wonderful way to spend an afternoon.” 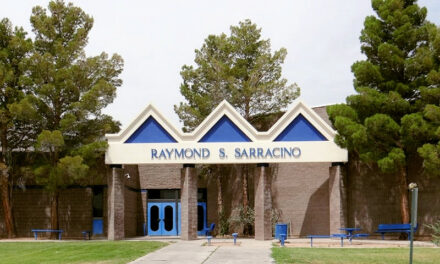