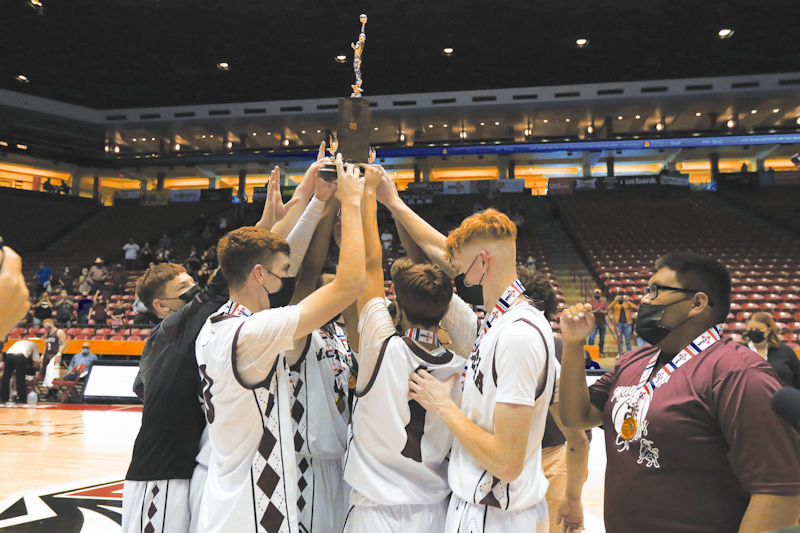 It has been quite a strange year for all of us. Sports helped to bring a brief sense of relief through some of the bad times, as they always seem to do. Here is a small selection of the many great games, meets and battles that brought fans out to cheer in 2021.

On May 6 the No. 1 ranked Magdalena Steers defeated No. 2 Melrose 56-43, winning the 1A State Basketball Championship. Last year Magdalena fell 63-53 to Pecos in the 2A championship game. Star point guard Joren Mirabal guaranteed the team would be back and this year they delivered. It was a team effort for the Steers as only two players, Mirabal and Kael Stephens, scored in double digits. However, every single player on its roster found the net.

“Coming off a game like this brings mixed emotions,” head coach Jory Mirabal said. “Of course, it’s great to come out with a win instead of a loss, but you fight every season with these guys and this is the end of the ride for this group.”

While sports in a limited capacity have been able to start back up with in-person learning, the past 11 months continue to take a toll on athletes. Indoor sports are still required to wear masks and larger championship events will not have a full collection of fans. Cross country and volleyball competitions will start on Feb. 27 with football playing an abbreviated, delayed season on March 4.

Players like Socorro’s Marysa Ocampo expressed concerns on how this process is going to work, saying, “We are kind of the guinea pigs. If we go first, I think they will let the schools have a season. If it goes bad then I don’t think the other sports have a season.”

With teams coming back practicing as of Feb. 1, NMAA Executive Director Sally Marquez said in a Q+A “The NMAA is going straight into focusing on fall sports as schools can opt out for this short season.”

Lady Warriors honored for their play at the net

It was a successful season for the Lady Warriors volleyball team that included a 20-6 regular season that ended in a playoff loss during the State Championships. Several hitters received awards for their work in 2021. Head coach JB Mauldin said in a statement:

“These girls had a great showing out there and really deserve everything they have been awarded. It was the second year in which we never lost a game at home. It was this group’s last run and even if we came up short there is nothing I would take away from those kids.” 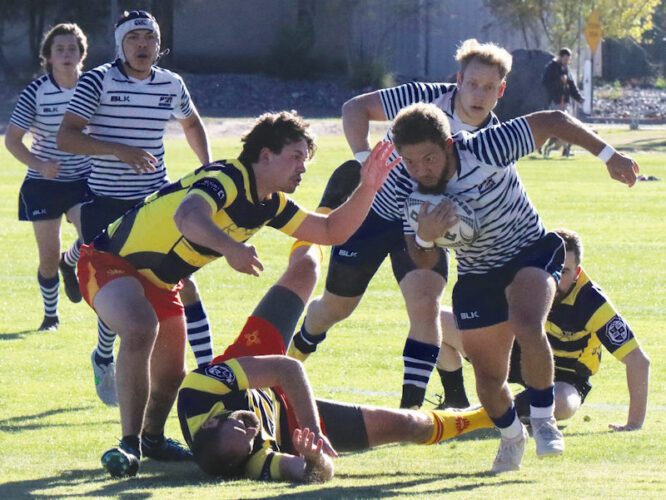 Miner’s head coach Gearoid Dunbar has a school known for science and engineering on the national stage, yet this sport for both boys and girls continues to grow every year.

The Miners started off the 2021 season at 6-0 and ranked number four in the nation. On December 10 Tech went to Houston and won in the semifinals against St. John’s 28-21 during the 2021 Men’s Collegiate College Championship. The final game was a heartbreaker as Tech lost by one score against Christendom.

“I never had to go back to the basics with this team,” Dunbar said. “Holding a higher standard of the guys helped to bring us great success this year.”

The Lady Miners are also improving, particularly with an increase in athletes on the team. NMT was able to participate in the annual High Desert Tournament in Albuquerque. The tournament featured teams from around the state. The smaller school Lady Miners teamed up with the New Mexico State Lady Aggies in order to go up against the bigger opponent UNM Lady Lobos. Despite the 25-19 loss, Dunbar was optimistic about the future of the program.

“It’s great to see this group of athletes come to something like this,” he said. “It’s great to see our brand of rugby going strong no matter the pitch. This is all part of the team model we are trying to build for the school.” 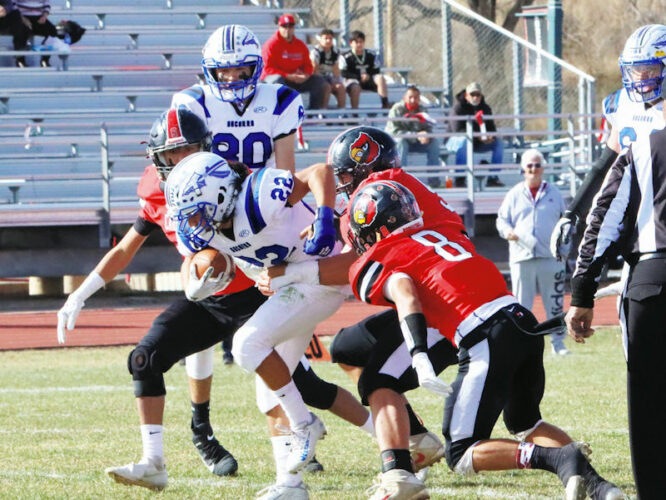 Warriors fall short to make it to championship game

Take out last year’s COVID season, the last two full years for the Warriors football team have had them losing just one game in the regular season apiece as they went into the playoffs both years as a top seed. Head coach Damien Ocampo and his staff always have the boys ready to battle in the trenches. In both seasons, the team won its first home playoff game. This season Dexter was the victim in a 41-0 slaughter. And once again they were bounced in the next round as Socorro lost on the road against Robinson 38-29.

Even as the season was winding down during the Warriors’ homecoming game win, Ocampo stressed wanting to see more from his team, saying, “We just have to play better. Late in the season, it comes down to who stays healthy and who is the more physical team. I can’t tell you how much games late in the season come down to making mistakes and that is how you lose.”

Turns out the coach was right in the end.

Masked swimmers take to the pool

Socorro was officially able to hit the pool again in full swing. Head coach Kirsten Dow brought a total of 12 swimmers, four girls and eight boys, up to the West Mesa Aquatic Center in Albuquerque. The team competed in the water against a total of seven other schools. Swimmers were required to wear masks when not in the pool, causing some frustration amongst the water-soaked. Socorro performed well for its first competition of a hopefully completed winter season. Socorro won one event outright in the Boys 200-yard medley relay, coming in at 1:56:83.

Lady Warriors out early in playoffs

Another year in which head coach Michael Olguin had the Lady Warriors competing at the top of their game. The team started off on Aug. 20 with a 10-goal blowout against Grants. They had two more double-digit wins and a total of nine shutouts on the year. Socorro had three losses on the field, only one of which was a blowout, losing 6-2 at Los Alamos.

The Lady Warriors were gearing up to make a big run toward The Fuddruckers’ Girls Soccer Championships. The team dominated Rehoboth Christian 8-1 at home in the first round. The team was ready to keep going.

“At this point, there is nothing else we need to do coaching-wise,” Olguin said. “This team has done everything they needed to do coming out of COVID. We have gone through the highs and lows. Victories and losses have made this team.”

A Nov. 2 rematch against St. Michael’s prevented the team from reaching state. The Lady Warriors fell in a hard-fought match 4-2.

The next generation of Socorro wrestling is coming up before our eyes. Two youth competitors will be visiting Virginia Beach for a competition in December representing Socorro for the New Mexico Junior Wrestling team. The two athletes hitting the mat on the road are seventh-grader Isiah Estrada, who attended the tourney last year, and in his fifth year competing in the youth league Kadeyn “King James” McNeil. Sixth-grader Kadeyn had to win two matches in order to qualify.

“I’ve been part of this group since day one,” McNeil said. “My other brother played and I fell in love with it. These coaches teach me not just wrestling but also life stuff.”

Head Coach Joel Partridge said after practice with the young athletes, “This is one of the greatest youth tournaments in the country. Olympic competitors start off at tournaments like this. It is the best of the best, and we always try to find the best competition.”

Two Warriors headed to the next level

Lady Warriors soccer is losing two of its best scoring options as they will be moving on to the collegiate level in 2020. Elise Madril and Lola Apodaca made it official this fall to continue to improve their talents while also furthering their education.

Elise was first to sign officially on November 10 at the Socorro gymnasium. The table was set and former teammates came out in support. Her proud parents and administrators were in attendance as Madril signed on to join the New Mexico State Aggies squad.

“It is kinda of surreal to have a dream of mine come true,” she said. “My parents went to New Mexico State and to finally be able to play there is great. ”Being able to play soccer, especially in D-I. That little girl who always wanted to play soccer has finally reached her ultimate potential.”

Next up was fellow senior striker Lola Apodaca. During a similarly decorated ceremony in the SHS gym with friends, teammates and family there, the young lady is heading north to Alamosa, Colorado. She will be the newest member of the Adams State University Lady Grizzlies.

“I always wanted to go to this school. The atmosphere is beautiful, my new coaches are nice, and my new teammates are great. I love everything about this and am so excited.”

The Alamo Navajo Nation was one of the hardest-hit communities in New Mexico during the pandemic. Being completely shut down at one point created a disadvantage for players. Coaches relied on social media platforms to maintain contact with players. It would not be unexpected for the two basketball teams to struggle. It was quite the opposite.

The success of the Lady Cougars should not have come as much of a surprise. In each of the previous two seasons, the girls posted 18-11 season records. If it had not been an abbreviated run, those season totals may have been shattered as they started off on an eight-game winning streak. Head coach Randy Hunt is optimistic they’ll find more success during a full season with the team.

On the boys’ side, the Cougars came out with a 13 point win against Carrizozo on April 1. From there they split the next four games, but to be fair, two of those were against its big brother school, Magdalena. The team never quit, winning two of its last three to end at 5-6, unexpected from such a rusty group given the circumstances. Senior captain Robert Monte was a big part of several team wins. 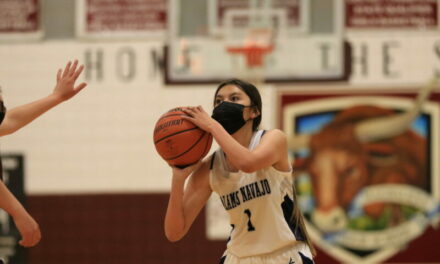 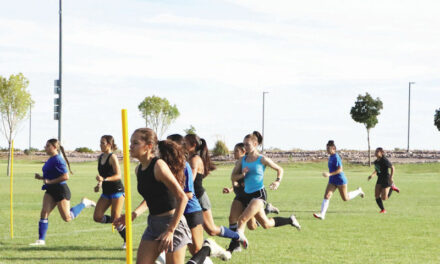 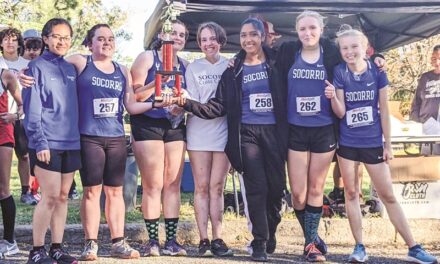 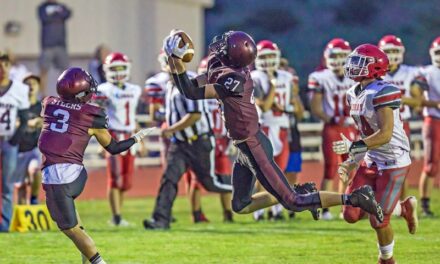