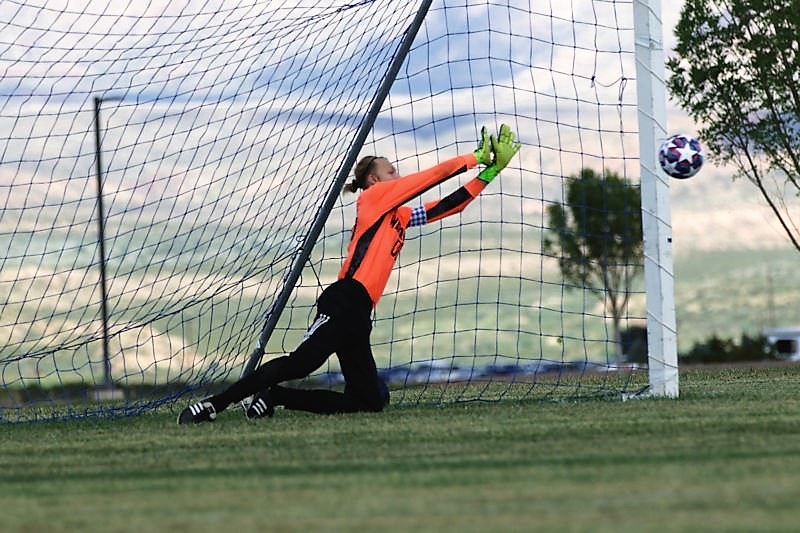 Socorro senior Gavin Spitz makes a save in the first half of the Warriors’ 2–1 win over the Robertson Cardinals at home on Thursday. Spitz had six saves throughout Warriors’ home opener at the Socorro Rodeo and Sports Complex.
Caitie Ihrig | El Defensor Chieftain

On Thursday, the Socorro Warriors soccer team (2–3) defeated the Robertson Cardinals (1–4) 2–1 in their home opener at the Socorro Rodeo and Sports Complex.

“Finally, finally, finally,” Warriors head coach William Oxford said about playing at home. “We’ve only been on the road for three weeks almost. We’ve only had four matches away, but it feels nice to get back out here. It’s so nice. We play so much better. You train on this type of grass. It just feels comfortable… Just the environment itself is conducive to quality soccer.”

Oxford said how beneficial it is for the Warriors to play at home, but mentioned that a lot of the fans travel to away games to support the team.

“We love our fans,” he said. “Our fans are absolutely everything. They even travel with us most of the time so we are a little bit spoiled in that regard because having people to cheer and support on, it helps the boys do so much better.”

Socorro took control of the game early on in the first half by taking a 1–0 lead off of a penalty kick. Warrior senior Josh Reyes got taken down inside of the penalty box, allowing senior Hezekiah Oxford to take the penalty kick.

“He’s pretty disciplined when it comes to the penalty kicks. He has a lot of confidence there,” William Oxford said of Hezekiah Oxford. “Josh got super deep in, created a stressful environment for the defenders and they had no choice but to clean him out because he is so dynamic and so quick. You almost have to knock him off the ball just to keep it out of the goal.”

As time was dwindling down in the first half, Robertson almost equalized the score on a penalty but Socorro senior Gavin Spitz made the save to keep the Warriors’ lead. 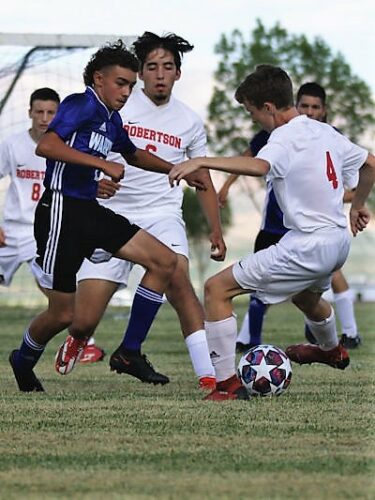 Socorro eighth-grader Jacob Angel kicks the ball between the legs of a Robertson player during the second half of the game on Thursday.

“Making that save on the penalty, that was a game-changer,” William Oxford said. “If you get scored on there, it levels the game kind of early and then we are having to scrap.”

The equalizing goal from the Cardinals came 15 minutes into the second half when freshman Aaron Doss took a shot from the left side of the field inside of the penalty box to the bottom right side of the net.

William Oxford said he was concerned how the Warriors would react when the Cardinals scored due to having a similar number of eighth and ninth graders and seniors.

“The boys did a really nice job holding their composure,” he said. “That was my biggest concern. Anytime you’re in a situation where your team is controlling the pace of play so much and not just getting the result, their goalkeeper just kept everything out, that when you’re controlling the pace and then it flips like that, it makes you really nervous.”

Having a large age and maturity gap, Oxford said, can be a challenge at times.

“You can kind of see that when we play. You can kind of see the discrepancies in the guys that have been doing this for a really long time and the brand new guys,” he said. “As soon as that chemistry comes together and we can create things, it’s going to look really nice.”

After Robertson scored, Socorro was able to maintain their composure and continue playing their game.

Roughly seven minutes later, junior Kris Sierra scored the game-winning goal for the Warriors with a shot from outside of the penalty box on the right side of the field to the bottom left corner of the net.

For Socorro, that was not a play that would normally happen as Sierra is a midfielder. Right before the goal was scored, Sierra was on the sidelines talking to William Oxford and asked his opinion for Sierra to play upfront.

As William Oxford put Sierra back into the game, Hezekiah Oxford passed the ball to Sierra who took the open shot.

“It was exciting,” William Oxford said. “That definitely wasn’t anything that we scripted. It was just more changing the look upfront. It worked out.”

The Warriors will host Rehoboth Christian at 2 p.m. on Saturday, September 11 at the Socorro Rodeo and Sports Complex. 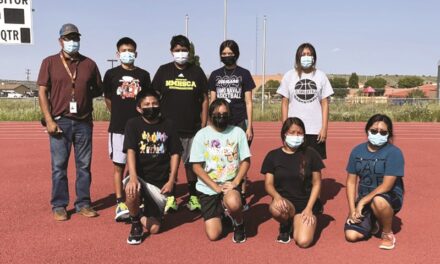 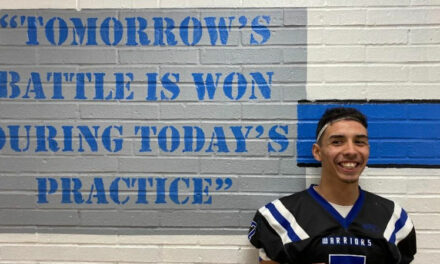 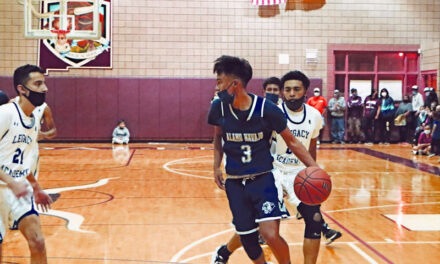 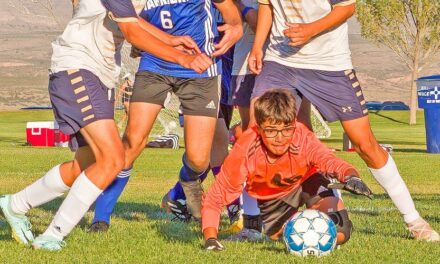