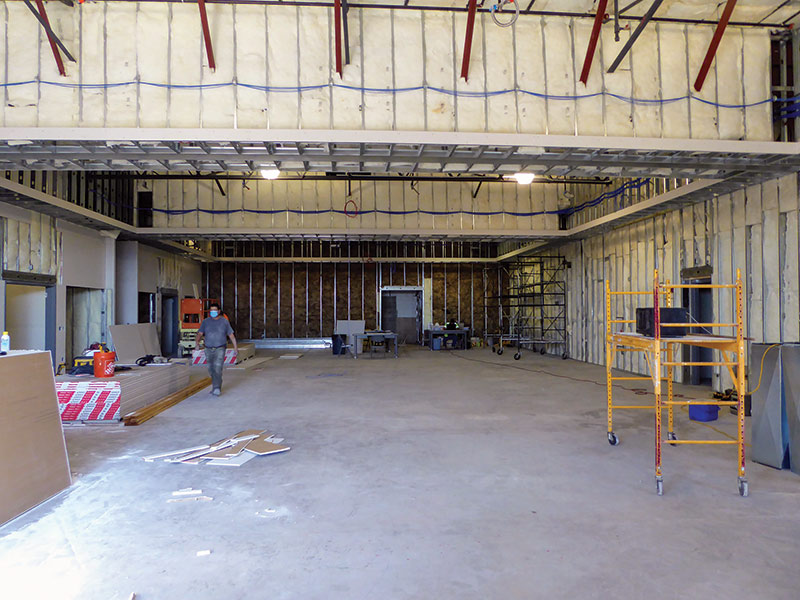 Workers returned Monday to continue the transformation of the former National Guard armory on Highway 60 into the City of Socorro’s new convention center. According to the city’s General Services Director Lloyd Martinez, the ongoing work is expected to wrap up by late January.
“So far, we’ve spent $800,000 of the $1.3 million budgeted,” Martinez said.
This week crews of contractors Chris Chavez of CC Construction and Chris Salinas of Northern Construction are installing drywall on the back of the interior partitions.
“We’re going to be installing all the ductwork in the ceiling, and then the gas piping to the HVAC units on the roof,” Chavez said. “We hope to have our heating and cooling system operational by October. And then we have till January 24 to finish the job.”
He said flooring will be done last.
“It’ll be a combination of commercial carpet and ceramic tile,” Chavez said.
The floor plan includes three breakout rooms; a large convention area that can be divided into three 1,300 square feet facilities; a warming kitchen; lobby; coat room; men’s and women’s bathroom facilities; storage areas; and space for the El Camino Real Heritage museum and gift shop.
In addition, the convention center boasts an outdoor patio area for additional seating.
Mayor Ravi Bhasker has said the convention center will be an economic development tool to get more people to come to the center of the state.
“We’re one of only three places in New Mexico where people can crisscross the state to go north and south as well as east and west,” he said.
Thanks to the state legislature enacting a “head and bed tax,” small communities like Socorro, can use the money for building or remodeling a convention center. In Socorro, lodgers pay an extra two percent every night they stay at a local hotel or motel to support the head and bed tax. Accordingly, taxing tourists was seen as more politically palatable than raising taxes.
While Bhasker owns two motels in Socorro, including one that has a convention center about the same size as the proposed facility. His wife, Addy, questioned him why he would support the city building a competing facility.
He said the new facility would benefit all hotels and motels in the community.
“We can have meetings of more than 300 people and there won’t be any conflict about we’re having it at the Best Western,” Bhasker said in a 2019 interview. “We want to grow our economy in hopes of bringing in small conventions.
“I’m not trying to run anyone out of business,” he said. “But it would be a good complex for the city at the armory’s old location.”
The convention center and museum will be accessed from Highway 60. The center’s entrance will be facing the rodeo area’s campground while entrance to the museum will face Highway 60.
The National Guard armory has stood vacant since 2012 when the 515th CSSB relocated to Belen.

Fire Weather
April 16, 2021, 2:18 am
Come as close as possible to the heart of your community.
Subscribe Today!