TRAINING COURSE being prepared by the Assembly of God Church. Beginning January 17 the “Learning from the Apostles” courses will take place during the 7:30 a.m. Sunday School sessions. Pastor Kenneth Page personally invites everyone in the community to join in the gospel services. The weekly course will be roughly 10 hours with attendance up to worshipers’ availability.

POLICE BUSY on Saturday, Jan. 8. After a quiet holiday period, officers responded to a four window break-in at the Socorro County Courthouse. Jailer Dan Julian was first on-site to report the incident. Julian reported that person(s) had broken four windows on the east side entrance of the courthouse sometime between 5:30 p.m. and 10:30 a.m. No arrests have been made.

SIDNEY POITIER brings his latest to Socorro. Fresh off his historic Oscar win as the first Black man to win best actor, Poitier is fighting injustice once again in “The Organization.” The film is heralded on the poster as “One rebel cop has the guts to take on THE ORGANIZATION.” Showtimes at the Loma will be all weekend long, starting at 7:15 p.m.

115 YEARS for Socorro. As of January 16, Socorro will turn 115 years of age as a county. For the unfamiliar, Socorro has existed much longer than its 115th birthday. Spanish explorers wrote about the helpful Native American tribes dating back to the late 1500s. The population from that point ebbed and flow throughout the centuries. Revelers will have to wait until summer in order to celebrate with city clerk Pat Salome guaranteeing a fireworks display.

WELCOME BACK PARTY to be held at New Mexico Tech. January 13 will have comedy, music and dance for students returning after the holidays. An 8 p.m. comedy hour will kick things off at the Macey Center. Rock & Roll presented by Harvey & The Prowlers will follow past midnight.

NEW ASSESSOR named. Delilah A. Vega-Walsh is the new official county assessor. Socorro County Commissioners unanimously voted Vega-Walsh to fill the two years remaining in the term of former assessor Andy Sanchez who resigned on December 11. Vega-Walsh is a Socorro native and is currently working on completing her regency in psychology at New Mexico Tech. She will be sworn in to the position on Jan. 21.

FIRST ANNIVERSARY for First Sierra bank. Thursday will host First Sierra Bank’s one-year celebration in Socorro. Refreshments, prize drawings and balloons for the children will be available. Two $100 savings accounts will also be given away.

ANIMALS ARE AMAZING winner has been announced. Mikey Kozloski won the end of the year Socorro Public Library award “Animals are Amazing” contest. Kozloski submitted information on the versatility of chameleons and their reactions to changing environments. The library congratulates Kosloski and thanks the young man for helping them become more aware about the animal.

PLAYGROUND EQUIPMENT being installed. City worker Michael Gonzales was one of many installing new items for children to play with at Isidro Baca Veterans Park, including a tire to jump on. The playground carries a military theme to honor war veterans and service branches. The park renovation is a joint venture between the city of Socorro and Socorro County.

BOMB THREAT at Socorro high school. Students received an early dismissal Wednesday after a bomb threat was called in early that morning. All staff and students were evacuated to the football field. Both entrances to the school were closed off and nobody was allowed to leave the field for more than an hour. The police were able to trace where the call came from but failed to apprehend a suspect as it was from a payphone.

BUSTAMANTE RE-ELECTED by Co-Op. The Socorro Electric Cooperative’s Board retained Paul Bustamante as its president during the group’s January 10 reorganizational meeting. Dave Wade remains vice president and Luis Aguilar is again secretary. The only change during the vote is Leo Cordova being named treasurer, replacing Milton Ulibarri. This begins Bustamante’s seventh consecutive year as the Co-Op president.

CHRISTMAS MIRACLE for Escondida native Gayll Dorr. Nineteen years ago, Dorr learned her six-month-old granddaughter was diagnosed with cystic fibrosis. A triple bypass surgery at the UCLA medical center was able to save young Jennifer’s life at 19. 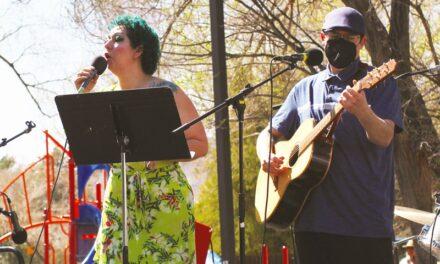