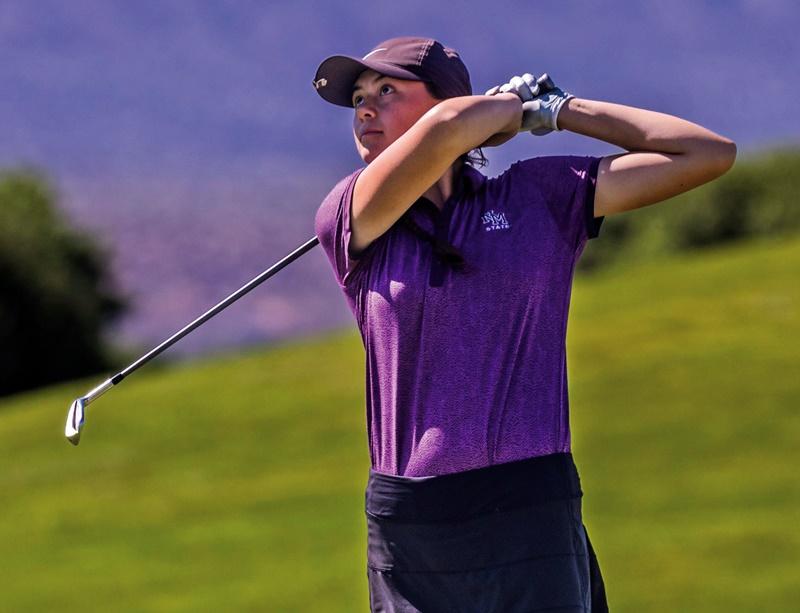 Rylee Salome hits a shot off the fairway during Saturday’s second round of the New Mexico-West Texas Amateur
Championship. Salome shot a 2-under 70 and led the tournament entering Sunday’s final round.
Mike Sandoval | For the Albuquerque Journal

SANTA ANA PUEBLO – Early on during the second round of the New Mexico-West Texas Women’s Amateur Championship, Annie Saecheung, a University of New Mexico sophomore, asked Rylee Salome what year of school she’s in.

Well, Salome, a 15-year-old high school sophomore who is home-schooled, could’ve easily been mistaken for a college golfer because of the way she played at Santa Ana Golf Club on Saturday. Salome shot a bogey-free 2-under-par 70 to move atop the leaderboard and takes a three-shot lead into Sunday’s final round, an 8:30 a.m. shotgun start at Santa Ana. Salome was the only one to break par on Saturday.

“I felt really confident today,” said Salome, who also shot a bogey-free 2-under to win the Class 4A state golf title for Belen High at Santa Ana in May. “I just felt like I was putting really good.”

“I think Rylee played really well today,” said Saecheung, who shot 3-over, just as she did in the first round at Twin Warriors Golf Course. “She had a real solid round. I, on the other hand, kind of had some mishaps here and there, but I kept my composure. I didn’t have any birdies today. Hopefully tomorrow will be better.”

Crawford’s round included four lip-outs that caused her to feel some regret, but she was pleased to be in contention and expressed excitement for the competition in the event.

“(This tournament is) great,” said Crawford, who played college golf at Texas Tech from 1984 to 1988. “That’s what I look forward to in this tournament: meeting these gals who are the up-and-coming players. It’s really an honor to play with young, great players.”

Salome appears to be on the path to becoming an NCAA Division I golfer. Her father, Pat, said he hopes his daughter will have multiple options for where to play in college.

Pat, who is caddying for Rylee in the tournament, is an NMSU alumnus who earned undergraduate degrees in economics and accounting and a master’s degree in economics at the university in Las Cruces that is UNM’s rival. He said he retired in 2015 after 28 years as the Socorro city manager so he could spend more time with his family and watch his daughter compete.

“I felt like if I stayed working when I didn’t really have to, I would miss out on watching her,” Pat Salome said. “It was a good time for me to retire based on my daughter’s age. If I were to miss her play, it would be my fault.”

Rylee said she wore the NMSU gear on Saturday because it was something that she picked out as pro-shop credit after winning the Sun Country Women’s Spring Stroke Play on March 27 at NMSU Golf Course.

She got a taste of college-like competition on Saturday with her group, which included Zamarripa, Saecheung and Crawford.

“They are all really high-level players,” said Salome, who finished fourth at last year’s NM-WT Amateur. “They were all really good. It was almost like a college tournament. It helped me for the road ahead.” 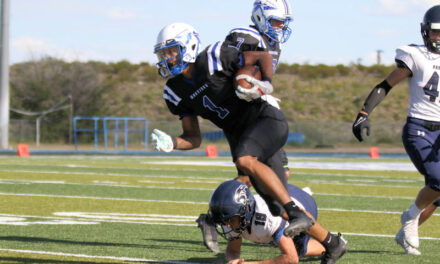 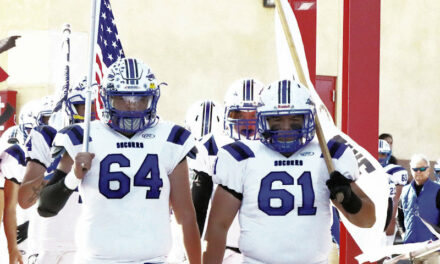 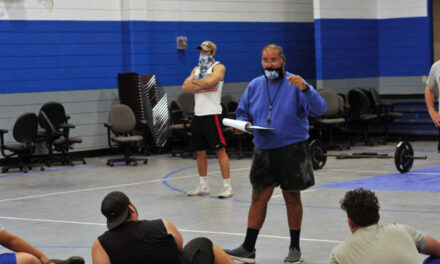 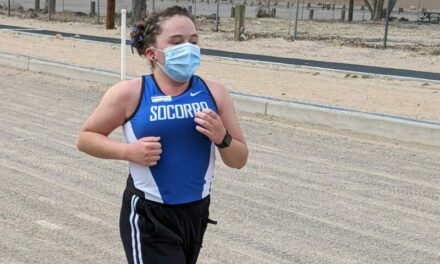