Bringing ’em back to life 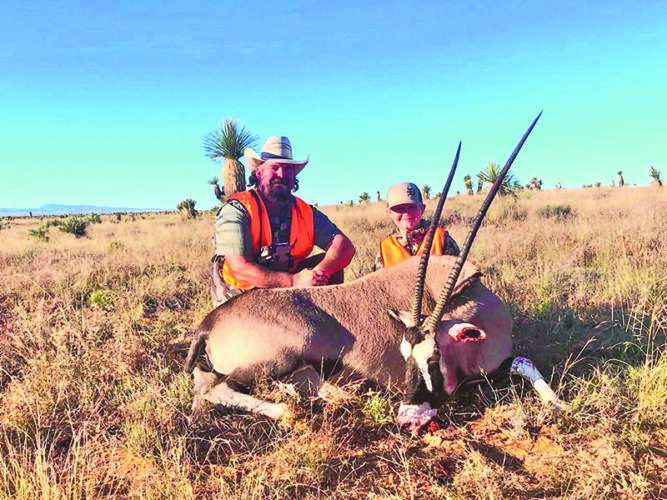 For Joe Don Autrey, ranching and hunting in Cibola and Gila National Forests go hand in hand and, for the last 18 years, he has turned his love of the outdoors into a nice living as an outfitter, game processor and taxidermist.

He was raised on Cat Mountain Ranch in Socorro County and graduated from Magdalena High School in 2000. Not unlike a typical ranch youngster, he started rodeoing at an early age, participating in high school and on through to college.

“I rodeoed for a long time. I rode all three rough stock events but ended up just steer wrestling,” Autry said. “I started getting a little heavy. I got that college weight put on me. I was getting too big to ride bucking horses anymore.” 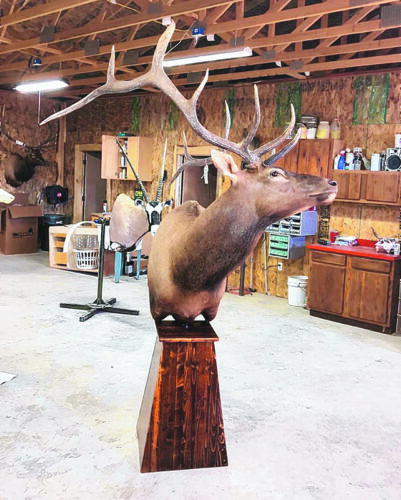 One of the many elks Joe Don Autrey has mounted in his 2,400 square-foot facility. The animal’s meat is processed there, and then delivered to the client in a reefer truck. Photos courtesy of Joe Don Autrey

But he had played around with taxidermy before that.

“When I was about 14 years old, there was a guy here in Magdalena who was the local game warden. Mike Gustin was his name, and in his off-time when he wasn’t doing his game warden patrolling and stuff, he was a taxidermist,” he said.

It was his association with Gustin that Autrey found he had a knack for the craft.

“He helped me along, and I started trying to do my stuff on my own, which was, you know, awful funny to look at,” he said. “By the time I graduated high school, he had relocated in Stanley, outside of Moriarty, and I was going to college in Albuquerque so, on the weekends when I wasn’t working at a rodeo, I would go and work for him.”

Returning to Magdalena in 2004, Autrey began doing taxidermy on his own, and for a few years partnered part-time with Demicio Silva in Magdalena.

He’s gone full-time since 2012, and with the help of his wife, Kimmie, who preps everything, Autrey was able to open not only a taxidermy studio but also a game meat processing plant.

Surprisingly, his business tripled after the pandemic hit.

“I was worried, at first, that people wouldn’t hunt. Would they able to travel? Well, it was the complete opposite,” he said. “I’m talking like guys in their 60s and 70s that had never hunted before, began hunting during COVID because there was nothing to do. Everybody’s been taking their meat and everybody gets their heads mounted.”

Autrey believes taxidermy is as much an art form as anything else.

“You have to have an eye for,” he said. “I try to look at a lot of live animals, look at how animals carry themselves, to give them that natural look while they’re hanging on the wall.”

He said the secret is in the fine details.

“There’s tons of great taxidermists out there, but many cannot mount a mountain lion because cats’ eyes are so finely detailed,” he said. “The way they set, the shape of them.”

Autrey has become known for his work not only on elk, antelope and oryx, but also for his lions, bobcats, bears, and Barbary and bighorn sheep — even badgers and foxes.

“Our biggest volume numbers are oryx,” he said. “I mount anywhere from 80 to 100 oryx heads in one year alone.”

On occasion, Autrey is commissioned to mount a steer’s head.

“We’ve been doing lots of bovines, like the long-horned steers in San Acacia,” he said. “Actually, something that happening quite a bit is people are getting their domestic cattle mounted.”

The one animal Autrey will not take on as a job is a horse.

A taxidermist who is also an outfitter has a good chance of getting more business, and Autrey is both.

“Growing up on Cat Mountain Ranch, I grew up hunting at a real young age,” he said. “Dad started his outfitting business when I was a young kid and where that ranch is, it’s against the national forest, so being on horseback all the time I always had an appreciation of wildlife.”

“Those areas are exclusively for primitive weapons, there’s no rifle hunting in those units,” Autrey said. “It’s just for archery and muzzle-loader.”

An elk hunt with an outfitter is customarily five or six days, but it can vary.

“I’m trying to talk him up and let him know it’s all part of hunting. You know, we all miss sometimes,” he said. “And I’ll be darned if on the very last day of his hunt we end up shooting a 390-inch bull. And it was the same bull that he had missed on the first day.”

Autrey said people come from all over the world to Magdalena for elk and antelope hunts.

“Magdalena is a primary location for hunting,” he said. “It’s just the right location to do what we do. We’ve outfitted for Ted Nugent and Montgomery Gentry. Even Donald Trump Jr. one time. I did the taxidermy on their trophies, too.”

Autrey does about 300 taxidermy jobs a year. Their busiest time is during hunting season.

“But, really, we stay busy year-round,” he said.

At one time a few years ago, Autrey also had a contract to do wildlife for the Rio Grande Zoo.

“My saying is that I’ll bring them back to life for you,” he said. “I like to believe we’re honoring that animal to get to go on the wall.”

Read more stories in the 2022 Cowboy Country in the Special Sections page on our site. 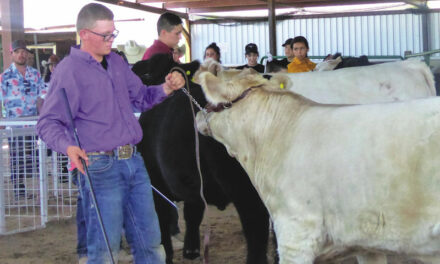 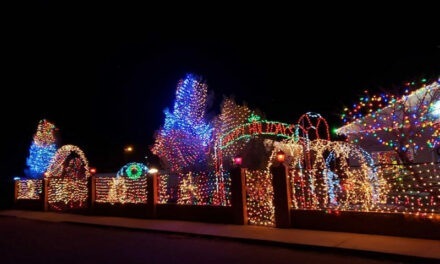