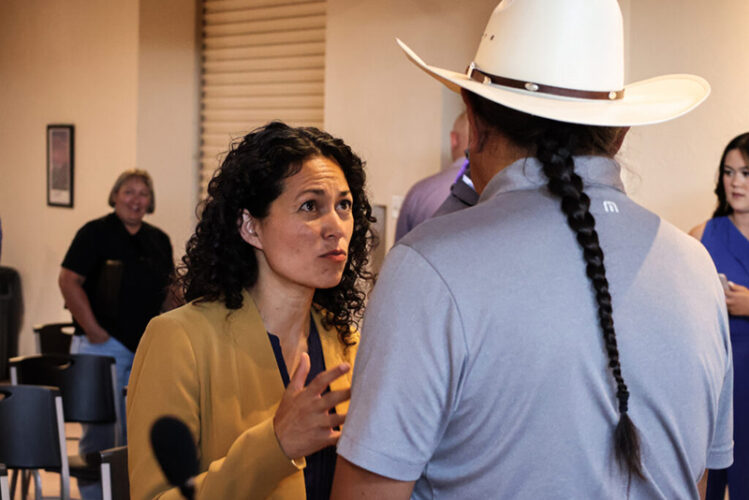 Under Secretary of the USDA Office of Rural Development Xochitl Torres Small speaks with a member of the public at the event on Wednesday. (Photo by Gino Gutierrez for Source NM)

With millions of dollars in funding from the federal government, New Mexico is trying to expand high-speed internet access across the state, especially in rural and tribal areas, where many have unreliable or out-of-date infrastructure and feel they get largely ignored.

Local, state, federal and tribal officials met on Wednesday in Los Ranchos to discuss the need for better internet access, with reasons ranging from health care and education access to starting a small business.

“Broadband connectivity is no longer a luxury. It’s a necessity,” said Santa Ana Pueblo Gov. Joey Sanchez at the event. “Broadband is a utility, like running water into a home, a road system, electrical power line. Broadband enables the day-to-day functions of a community.”

He said he’s glad tribal communities, who sometimes get left out in legislation, are included in this funding initiative. Many people living on tribal lands are at a disadvantage without good internet access, he said, including with their health care.

Community members traveled from all over the state to talk with officials and ask questions about how the push for broadband will impact them.

The United States Department of Agriculture announced in July an allocation of over $100 million in broadband grants and loans for the installation and expansion of internet services, that money serving primarily New Mexico but also Arizona. In addition, Rep. Melanie Stansbury said at the event that another almost $150 million is expected to go toward tribal communities’ broadband projects specifically.

Who gets the money?

The broadband money is part of a larger pot of money — $3.8 billion — allocated to New Mexico from the Bipartisan Infrastructure Law. Just over $24 million in grants is destined for organizations working on internet projects:

Retired Edgewood teacher Evelyn Vinogradov said while this funding is good, it’s not enough. “That’s a drop in the bucket for what we need,” she said.

The state’s broadband office is in the process of applying for more funding. But it’s about a five-year process, recently appointed Director Kelly Schlegel said, and the team is understaffed. They’re trying to hire more workers, she said.

Stansbury’s spokesperson Julia Friedmann said the federal grant money has already been obligated, so it should be available now or very soon. Awardees have to pay costs upfront first, then get reimbursed, she said.

But materials for projects may not be readily accessible due to supply-chain problems related to COVID.

“I think every single entity, whether it is a public works project or somebody trying to remodel their home, is dealing with supply-chain issues right now,” Stansbury said. “It’s a global problem.”

Stansbury said while the federal government is working on the issue, she expects it will resolve itself and goods will become more available over the next six months.

The federal government is communicating with rural partners on the ground for these projects, said Xochitl Torres Small, a former southern N.M. congressional representative who today is the USDA rural development under secretary. “We’re trying to change the way that federal government listens to people in rural areas,” she said.

Vinogradov, rural caucus chair for the Democratic Party of New Mexico, said she experienced internet issues all the time as an educator in Edgewood.

“I want them to see us. They already know who we are,” Vinogradov said. “I want them to realize that the rural communities are watching them and monitoring them, in a good way.”

“We have a lot of issues. Rural New Mexico has been left behind for a long time,” he said. “It’s not just New Mexico. It’s every state.”

Topper said there’s been an influx of people with good salaries moving into his community to get away from cities, which could benefit the local economy. But they need to work remotely, he said, and that requires good internet access, which they don’t yet have.

“If we don’t seize the opportunity to get a long-term strategy for rural New Mexico,” he said, “it’s not going to end well.” 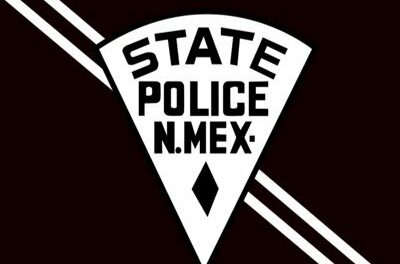 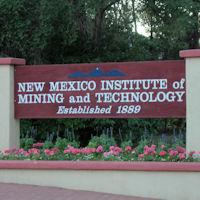 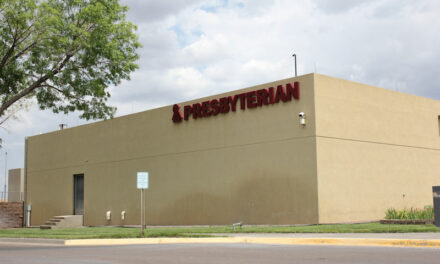