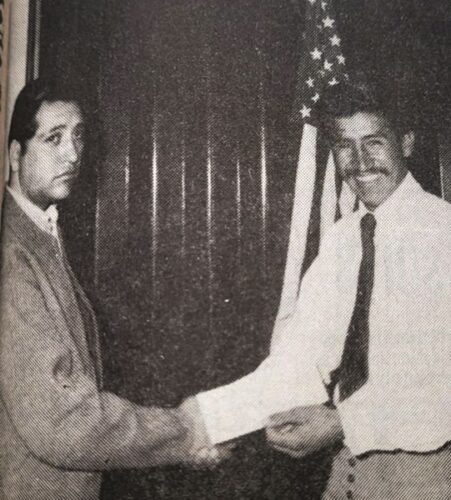 JAYCEE CHAIRMAN Shorty Vaiza presented a check for $760.46 to Louie Anaya on Tuesday to be used for medical expenses (kidney machine rental) for his stricken wife. The Jaycees raised funds for Mrs. Anaya in a three-day road block donation project a week ago. The check was presented to Anaya at the regular Jaycee meeting last week.

WORKMEN WERE BUSY Tuesday afternoon putting up Christmas decorations in the downtown Socorro area. The crews, compliments of Socorro Electric Cooperative, said there were enough decorations for every light pole through town and on Highway 60 to the city limits. In addition to the Co-op group, three county employees helped on the annual project. The decorations are furnished by the Socorro Chamber of Commerce and are installed each year by the Co-op men and other volunteers.

EL PUENTE DEL SOCORRO received honorable mention for a Business and Industry Award presented by Keep New Mexico Beautiful at its annual meeting and awards ceremony. The City of Socorro provided the non-profit program for victims of domestic violence and their children with a house to be used for its office. Karyn DeBont, manager of the New Mexico Tech greenhouse, coordinated an effort to beautify the grounds from the design of the landscaping plans, planting, to the maintenance of the site. 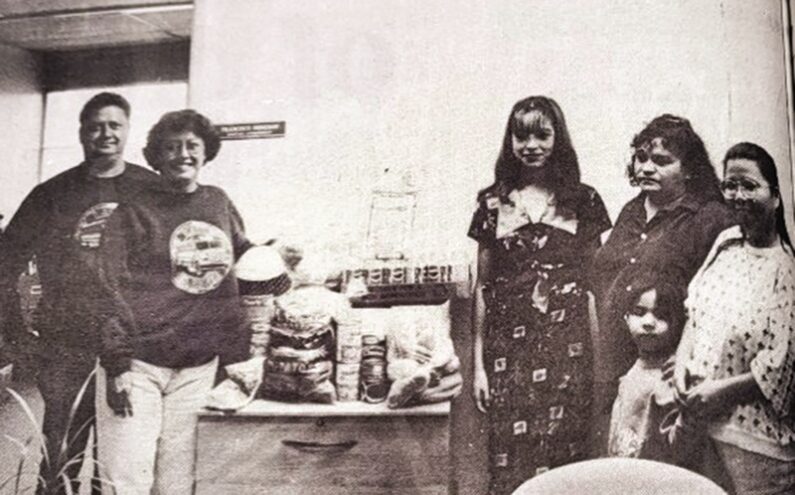 BUS DRIVER’S HOLIDAY. Marleina Castillo, four-years-old, and Margarita Gonzales, middle school student, were the lucky recipients of the second annual bus drivers’ giveaway. Their names were drawn from bus students to receive turkeys and all the fixings for their families. Annabell Romero, JoAnn Valles and Gene Vega were on hand to hand-out the goodies. Other bus drivers who donated food were Santiago Ulibarri (the turkeys), Diana Gonzales, Genieve Martinez, Larry Whitefield, Shiela Armijo, Ramona Aragon, Claudette Gallegos and Rita Moore.

DRUGS AND MONEY were motives for the suspects involved in the kidnapping and murder of a 28-year-old Los Lunas man, according to the New Mexico State Police Lt. Tim Johnson. Johnson said the suspects were arrested Tuesday evening as part of an investigation with the U.S. Marshals Service in Albuquerque. Both suspects are charged with an open count of murder, kidnapping and arson following an incident where the victim’s body was found by a volunteer firefighter near a burning vehicle in Bernardo near U.S. 60 and N.M. 304 on Nov. 12.

AN ALAMO WOMAN was taken for nearly $1,000 recently when she tried to order a Yorkie terrier over the internet. Socorro County Sheriff’s Department blotters report the woman tried from Oct. 22 to Nov. 9 to get the terrier, sending Money Grams to Africa. The suspects kept emailing the victim, telling her to send more money, but she never got the dog. The dog was first advertised for $200. When the woman contacted the person, the man told her to wire him $200. Another man emailed the Alamo woman saying they needed another $250 for immunizations for the dog. Next they needed $300 for taxes. The woman sent those amounts, but never received the dog. Finally she received another message stating she would have to send $1,000 or the men would contact an animal protection agency and report her. This is when the woman went to the police. 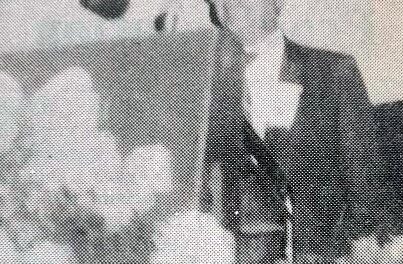 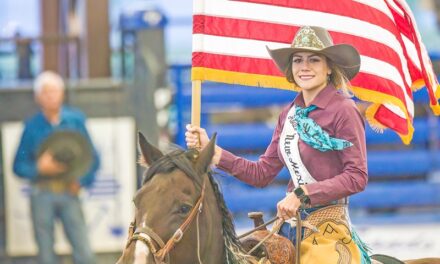 Miss Rodeo New Mexico: Jamee Middagh is on a mission to educate