SOCORRO YOUTH – Joel Haley wins at September 16 New Mexico State Fair. Haley, son of Mr. and Mrs. Scotty Haley, received the Sportsmanship Award in the 11 and under category during the Appaloosa Horse Show. Joel also road his Appaloosa, Sabina Speck, to second place in his age group in the barrel race competition.

SCREENING FOR HEART DEFECTS – The fourth-grade school children of Socorro will be screened by the Phono-Cardio Scan program of the New Mexico Heart Association. Local medical testing will take place under the supervision of public health nurse Mrs. Evelyn Smelser. The Phono-Cardio Scan has been in New Mexico for three years and generally covers the entire state. The purpose of the program is to locate and confirm known or unknown cases of heart defects. In the case of new or previously unknown cases, a child coming out with “outside normal limits” PCS results will be referred to a family doctor.

NEW MEXICO TECH – For the first time New Mexico Institute of Mining and Technology has passed the 1,000 mark in enrollment. The registrar’s office of Socorro has 1,006 students enrolled for the fall semester. The official figure exceeds the estimated 875 students expected. Tech sees a six percent increase with incoming freshmen totaling an even 300. This figure is more than double the schools attendance of just five years prior.

PIE TOWN CLOSES LOAN – The Farmers Home Administration announced the closing of a loan and grant totaling $10,000 to the Pie Town Water Users Association. The funds will be used for exploration and equipping a water well for the Pie Town water supply according to David G. Sease, County Supervisor. The water wells went dry this past summer and the National Guard had been hauling water for the town.

FIREFIGHTERS – Firefighters will have an easier time getting college credit for courses taken under a new agreement signed this week. The agreement between New Mexico State University and Socorro-based firefighters means that the state training facility will recognize course trained prior to enrolling at the university. The agreement spells out additional requirements for courses leading to an Associate of Applied Science Degree in Applied Science.

TRINITY POETRY – Keith Williams, a New Mexico State English professor, and Richard Bodner, a poet/performer, will be performing public readings Saturday, October 5, at the Trinity Site. The Trinity Site in White Sands is the original location of the first atomic bomb being tested in 1945. All Socorro High School and New Mexico Tech students are free to attend the event.

FAIR QUEEN OVERCOMES – 2010 Socorro County Fair Queen Kelly Montoya will be competing in the 2011 New Mexico State Fair. While she looks like a charmed beautiful Queen while riding her horse or dancing with the Charisma Blues Dance Team, life has been far from perfect for Montoya. At just six weeks old she was diagnosed with a chronic kidney disease called pyelonephritis. When it flares up, the disease can be incredibly painful and will eventually require a kidney transplant. Despite many referring to Kelly as inspirational, all the young lady wants to do is compete and represent Socorro.

NEW BASEBALL COACH – After spending four years as an assistant coach under head baseball coach Alan Edmonson, Kenny Gonzales will officially be announced as the Warriors new head coach on Wednesday, beating out two other candidates for the job. Gonzales is humbled but focused more on seeing his players succeed instead of personal success. “I want the kids to have their own dreams, and I want to be a part of them fulfilling their dreams.”

INFANT BIRTH ON THE HIGHWAY – Gabrielle Brown was in the back seat of her car with her husband Kenneth rushing to the hospital on I-25 at 4:30 a.m. Gabrielle woke up knowing their new baby was coming. Halfway to the hospital, the child was coming. Kenneth rushed to pull over so fast he forgot to pull the parking brake which Gabrielle reached to secure as the newborn was crowning. Kenneth barely made it to the back seat in order to catch their newest blessing, and that is how Tatum Rae Brown was brought into this world.

MAGDALENA STUDENTS MEET AIRMEN – Seven Magdalena students were selected to attend an aviation camp at Kirtland AFB. The camp was funded by the Tuskegee Airmen Association, a World War II organization of Hero Pilots and Air Crewmen. The students had the chance to meet with Tuskegee Airmen veteran Dr. James B. Williams, now 93, who made it a point to interact with all of the students. 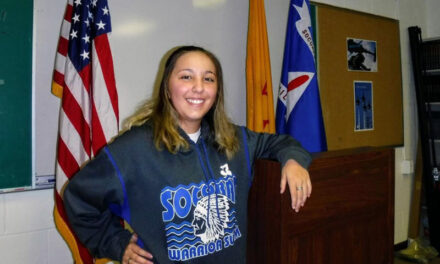 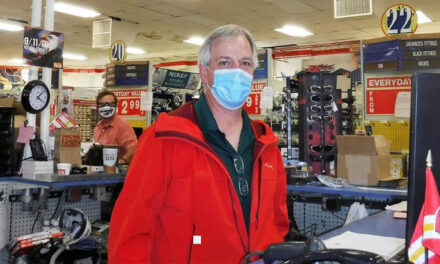