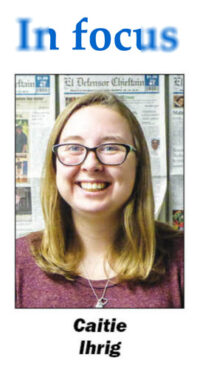 Saturday was a day full of happiness and sadness. As I said bye to my best friend, Nicole, we both stood there and cried as we gave each other three hugs.

Those two and a half days together were just what I needed.

The trip to Ithaca started on Thursday as the first thing I did was head up to Ithaca College. Once I arrived on campus, I went straight to the fountains as that has always been my favorite spot as it’s incredibly relaxing and peaceful.

As I was walking through the tunnel in the main part of campus, I ran into Cheryl as she heads up the post office and mailed out The Ithacan for me every Thursday. I told her everything that has been happening recently and filled her in on what it’s been like out in New Mexico.

I then headed to the Park School of Communications. I spent more time in that building as an undergraduate student than I would like to admit to. There were 16+ hour days spent there.

I talked to Associate Dean Bryan Roberts for a little while and then headed to the main floor of the school. Assistant Professor Rhonda Vanover wasn’t at her office yet and it felt just like my college days as I sat outside her office door waiting for her.

Once she arrived, it was like things had never changed. There was a lot of teasing and making fun of me and her helping me figure out what I want out of my career and life. She gave me spot on advice, just like she did when I was a student.

It was then time to go meet up with Nicole and her boyfriend, Eric.

There was a very tight hug when I arrived at lunch as the last time we saw each other was when we graduated in 2018. We met up at Thirsty Owl, which is a winery in the Finger Lakes.

After a very filling lunch, we headed over to the Finger Lakes Cider House to taste test four different ciders.

It was then time to head back to Ithaca and we went separate ways for two hours so that I could check into my hotel and we could all get ready for dinner.

Later that night, we met up in The Commons where a band was playing a free concert. After listening to that for a little while, we headed to The Ale House for dinner as it’s my favorite place for dinner in Ithaca.

We then went to Purity Ice Cream, which is the home of the ice cream sundae. All three of us got brownie sundaes as Purity makes the ice cream and brownies on site. It was absolutely delicious.

Friday morning rolled around and we met up at Waffle Frolic for breakfast. I ordered an ice cream sandwich which has cookie dough ice cream between two waffles with whipped cream and chocolate sauce on top. Easily my favorite meal of the weekend.

We then headed over to Robert H. Treman State Park to do a four mile hike to the waterfalls. It was a little steep as my watch said that during the duration of the hike we had over a 500 foot elevation change.

The hike was 100 percent worth it when we reached the falls. They were tucked away behind rock formations and were absolutely breathtakingly beautiful. There were also mini falls throughout the hike.

Going back down was a lot easier as we took a different path back to the trail opening as we wanted to see the falls from the other side of the river. There were hardly as many stairs and going downhill is a lot better until I get too much momentum and feel like I’m going to tumble over.

We met up later that night for dinner and we somehow color coordinated very, very well. I matched both Nicole and Eric and it felt like we were right back in college where we would meet up for a meal and realize we were in the same or very similar clothing.

Dinner that night was at the Ithaca Beer Co. as they have amazing root beer that is made there. We split pizzas for dinner and ate a whole ton of French fries.

Saturday morning was the last bit of time we had together and we met up at the Farmer’s Market which sits right on the lake. I really try not to take for granted how beautiful Ithaca is.

No matter where you go in Ithaca, you can just about see the lake or various waterfalls.

The Farmer’s Market is situated in a wooden structure with string lights and there are many vendors that sell delicious food.

Nicole and Eric bought some food and lemonade and we spent the last little time we had together sitting near the lake.

When it was time for me to head out, I gave Nicole the last of the candy pie that my mom made for us and she was very excited.

After waiting for this trip for three months, the few days we had definitely flew by but it was amazing and I’m so glad I was finally able to see my best friend again.

Letter – Vote NO on Constitutional Amendment 1

Letter to the Editor: Fireworks sound like a war zone