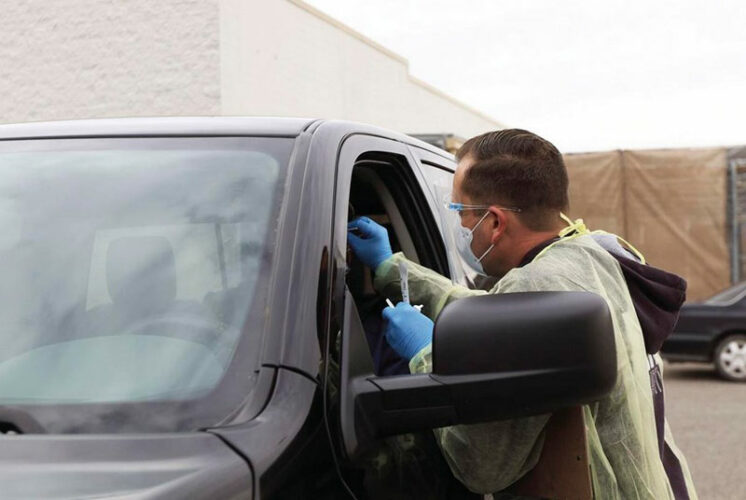 In conjunction with the City of Socorro, Positive Outcomes is hosting rapid testing for the coronavirus each day this week at Walmart.

The first round of testing tests was from 10 a.m. until 2 p.m. Monday through Wednesday. Positive Outcomes will be at Walmart Thursday and Friday from 3 p.m. to 6 p.m. and on Saturday from 10 a.m. to 2 p.m.

Just like the PCR test, the rapid test is also a nasal swab. After the nasal swab is removed from a patient’s nostril, it goes into a reagent. The reagent rinses everything that is on the swab and then it goes into the rapid cassette. The rapid cassette looks for specific antigens and proteins in the sample. If those proteins are present, the patient has tested positive for the coronavirus.

For the week-long testing, 700 tests were ordered and 99 tests were used on Monday. JC Trujillo, Positive Outcomes CFO, said he was not expecting such a big turnout on Monday. 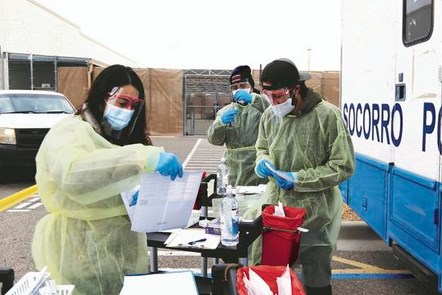 “I was expecting maybe 40 or 50 on the first day,” he said. “We had been pushing it on Facebook. We didn’t get a whole lot of response. We got a little response on Facebook, not anything near to prepare what we had (Monday).”
Rapid Testing 35

The City of Socorro also promoted the testing with email blasts and robocalls.

Trujillo said that about a month ago he approached Socorro Mayor Ravi Bhasker about implementing rapid testing. Bhasker agreed to do the test side-by-side with the PCR test on some of his patients to compare the results. The rapid test results are known in 10 minutes while the PCR tests are sent to the lab and results are usually known in 6-8 days.

According to Trujillo, Bhasker went to him last week and said that the test needs to get out into the community. Bhasker then began to look at funding the rapid tests through CARES Act money.

The City of Socorro and Positive Outcomes also had to figure out the logistics and where in town would be big enough to host rapid testing. Trujillo reached out to Walmart’s general manager who then reached out to corporate to get permission.
Rapid testing blue glove 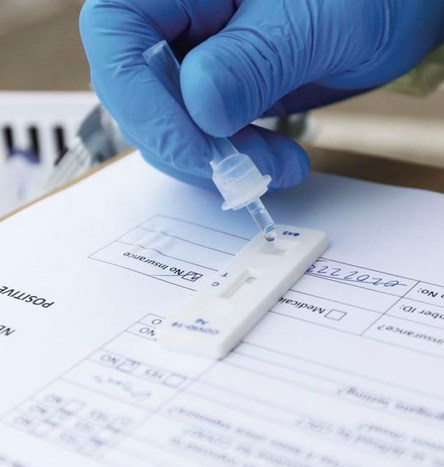 An EMT puts droplets of the reagent into the reagent cassette to test a patient for the coronavirus. The reagent has samples from the nasal swab. Caitie Ihrig | El Defensor Chieftain

“They got back to us right away and set up everything,” he said. “They were the ones who roped everything off and dedicated that parking area. It was a great collaborative effort.”

Trujillo said that Positive Outcomes and Socorro wanted to use the Walmart parking lot because it is a “major hub and major shopping area” in the community.

When testing began at 10 a.m. on Monday there was a line of cars in the parking lot and there were hardly any breaks in the line throughout the testing hours.

“We had anticipated a steady stream so that we could quickly get the results logged into the database and a report generated,” Trujillo said. “We got so backlogged that we were having to ask people to come back or wait longer than what we had anticipated. Tests were processing fine, but getting them put into the system for logging and a report generated is where we ended up with a bit of backlog. We worked through it and got all of the results out.”

When patients arrived at the rapid test, an EMT asked them for their name, date of birth, race, ethnicity, physical address and phone number. The patient is also asked a series of questions which include:

• In the last 14 days, have you been exposed to someone who has tested positive for COVID-19?

• If yes, how many days has it been since exposure?

• Symptomatic as defined by the CDC?

According to Trujillo, the rapid test is mainly for those who have symptoms or have been recently exposed, but anyone can take the test.

“The thing behind that is you don’t always know if you have been exposed,” he said. “If you have been out shopping or have been around people, you don’t know who out there is positive. A person standing next to you could be positive. The idea is early detection so you can quickly know and keep yourself safe as well as the family members around you.”

Patients should be tested five to seven days after exposure as that is when the test will be the most effective. While the rapid test is to know if a patient is positive for the coronavirus, the test cannot determine if a patient has recovered from having the virus. A patient would have to take the PCR test to show that they are recovered.

Trujillo said that he hopes having the rapid test will allow people to know if they have to quarantine right away or not instead of having to wait almost a week to know if that is required.

“I’m hoping that it will be able to quickly identify those who are positive so that way we can control the spread,” he said. “The end result is to move Socorro county from red to green and keeping people safe so the economy can start to recover.”