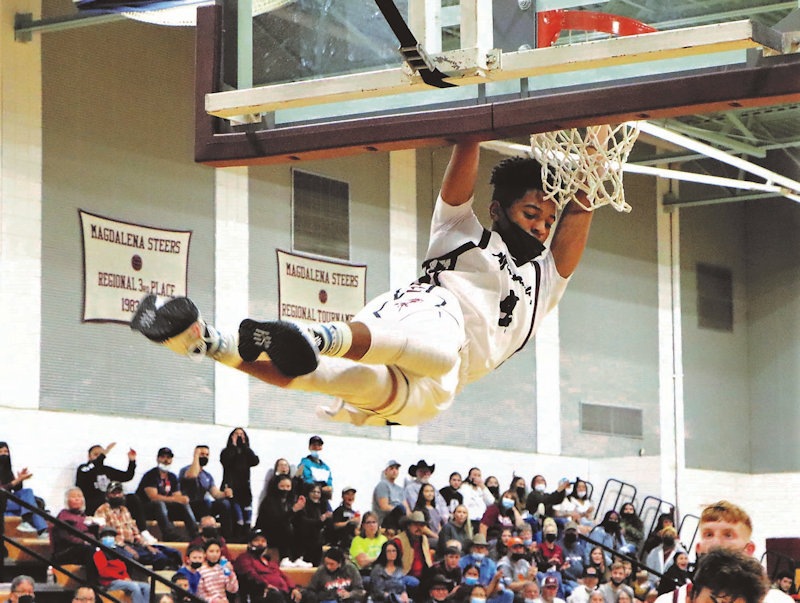 D’Shaun Vinyard taking off on a big dunk as he posterizes the opponent.
Greg Byrd | El Defensor Chieftain

The Magdalena Steers team finished off 2021 unblemished. Since taking home the District 1A State Championship victory, Magdalena has been unstoppable on the hardwood. December 30 had the Steers defeating crosstown rival Fort Sumner to the tune of 71-52.

“It’s always a good match-up playing Fort Sumner,” Steers head coach Jory Mirabal said. “We’re gonna get their best shot and coach Holland is going to have his kids ready for us. We need more games like this and I was glad to get this level of competition in before the end of the year. This was not an easy win at all.”

It did not take long for the Steers to get it going. A steal and dunk by D’Shaun Vinyard had the fans in the stands on their feet early. Senior Joren Mirabal followed things up with his Steph Curry-esque shooting ability from beyond the arc, hitting threes right on schedule.

“I got the ball and thought why not just go for the bucket,” Vinyard said. “We got a bit more energy from the fans but in the end, all I did was score another point. That is all we try to do. Teams we face should expect us to be better every game.”

Fort Sumner refused to go down early. Senior captain Seth Saiz was hitting shots all over the Magdalena floor. The 21-12 first-quarter score for the home team did not reflect how close this end of the year game was.

Saiz made the first shot after halftime on a tricky lay-in. Things got scrappy in the third quarter with shouting and shoving matches taking place as the game heated up. Magdalena was able to escape with the victory.

“When it came down to it we had to go back to basics in the huddle,” coach Mirabal said. “We need to start cleaning things up as a team which is what needs to happen if we want to keep winning.”

The Steers came out of the game with 21 points in the first quarter and 22 points in the fourth quarter. The second and third quarters had Magdalena flirting with single-digit scores in the paint. Joren Mirabal led all players with 31 points total. Led by Saiz’s mid-range game, Fort Sumner had 16 points in the final quarter on an almost comeback victory. Tall man Joseph Zamora was a monster at the rim, defying the Fort Sumner attack.

“All I did was block out,” Zamora said. “Keep my opponent in front of me. I was just trying to be aggressive and get the ball. Tonight we played to the best of our abilities, but we know we can play better.”

Next up for the Steers is a January 6 home game against the Reserve Mountaineers who currently sit at 8-3 and are second in the A District 2 standings. The Steers remain the only unscathed team in Class A with Elida and Mesilla Valley not far behind with just one loss. 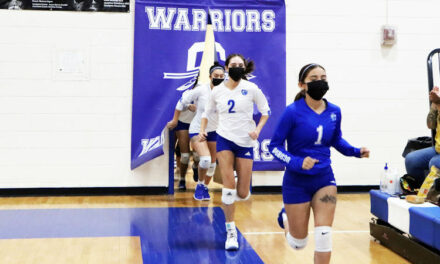 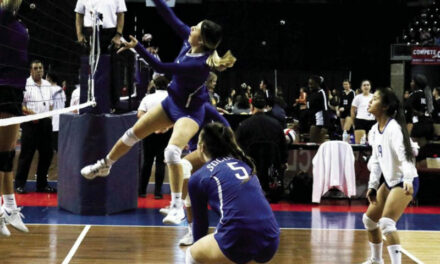 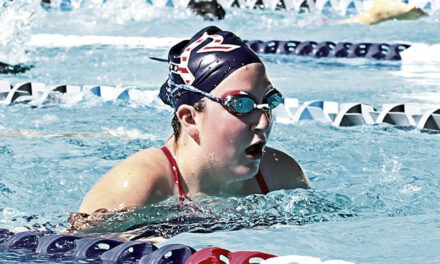