Socorro County posted what may be a new one-day record for new COVID-19 cases last Friday, with 36 infections in a single 24 hour period reported by the DOH.

During a virtual press conference last week, New Mexico Governor Michelle Lujan Grisham addressed the state’s policy on COVID-19, suggesting that booster shots were needed to minimize the severity of the disease.

Both she and Acting Health Secretary Dr. David Scrase said officials are discussing whether to redefine what constitutes being fully vaccinated, given the evidence that immunity wanes after about six months for the Pfizer and Moderna vaccines and two months for the J&J vaccines.

“New Mexico is the third state in the nation to determine that while the CDC is debating when immunity wanes and to what degree that it wanes, that because we are making the booster shots available for older populations but no real prohibition about giving it to everyone,” Lujan Grisham said. “We’re erring on the side of caution by presumptively leaning in. By making sure that all of us that can be vaccinated should do so.”

She said that vaccinations are the most effective tools to “both blunting the spread of the virus and to protecting ourselves and our family.” 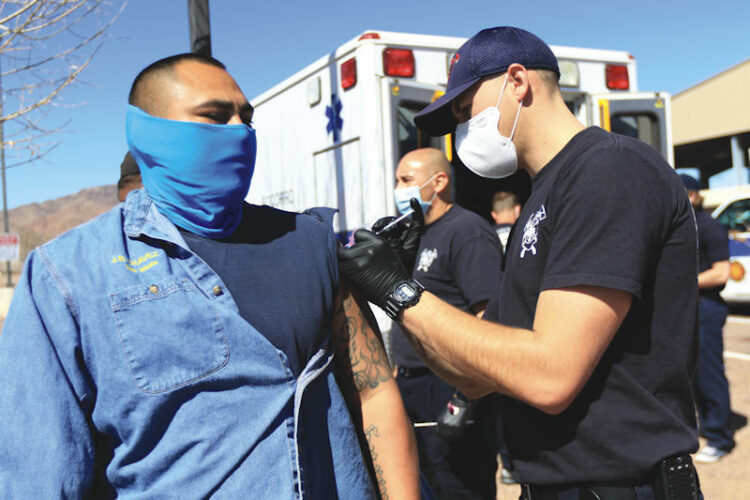 Although no new deaths were reported as of Friday, Nov. 19, there were two new COVID-19 hospital admissions in the seven-day period.

For ages 5-11 years old – the latest group eligible for the smaller dose Pfizer vaccine, 10 percent have received the first dose.

State health officials announced on Friday that 5,263 New Mexicans had died due to COVID-19. As of last Friday, 548 people in New Mexico were hospitalized with COVID-19, with six hospitals in active crisis standards of care.

“We’re seeing way too high the number of cases,” Lujan Grisham said. “We’re seeing spikes, which leads to far too many hospitalizations. Far too many workers are unable to go to work.”

The latest data released by the CDC showed that Socorro County’s COVID-19 positivity rate for the seven days ending November 21 was 14.16 percent. The number of new cases in that seven-day period was 114. Thirty-six of those cases were reported solely on Friday and 22 last Thursday.

Lujan Grisham said that besides vaccinations, “Masks do work to prevent the spread to the highest degree possible,” adding that N95 and KN95 masks give optimum protection.

The Health Department is administering the Pfizer-BioNTech, Moderna and J&J vaccines on Mondays and Wednesdays from 1-3 p.m.

To make an appointment for a vaccine create a profile by filling out an online registration form at vaccineNM.org. New Mexico residents 18 and over can get a booster shot if they received the Johnson & Johnson vaccine more than two months ago or completed the Pfizer or Moderna vaccine series more than six months ago.

State officials promised not to let up with testing, saying it’s a valuable tool that helps with tracking the virus.

Testing continues at the Public Health Department, 214 Neel Ave., on Mondays and Wednesdays from 9-11:30 a.m. Precautions remain the same. Wear a mask when in public and around others and wash your hands. If you are sick, stay home as much as possible.