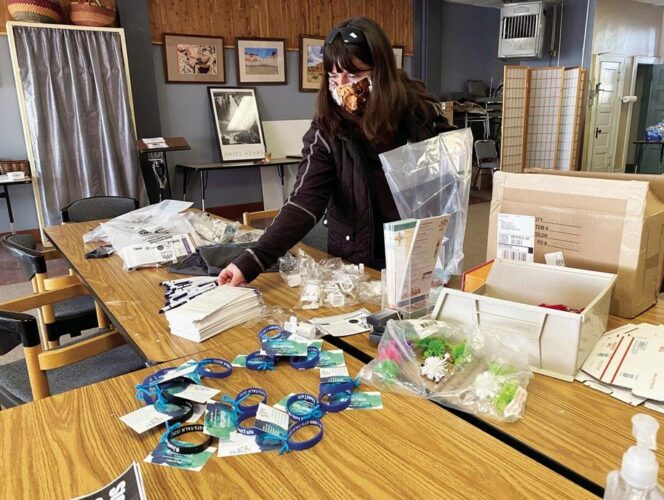 Samantha Winter of SCOPE fills goodie bags last week that were then mailed out to the runners who participated in the Stomp Out the Stigma 5K.
Caitie Ihrig| El Defensor Chieftain photos

Over the weekend, roughly 50 people participated in SCOPE’s Stomp Out the Stigma virtual 5K.

This is the first time that SCOPE has hosted a 5K themselves. In the past, they have helped out with the Presbyterian Run for Your Life by paying for the t-shirts.

The idea came to host a run when the coronavirus pandemic started in the United States in March. Samantha Winter of SCOPE said they were trying to figure out ways to reach a magnitude of people and promote mental health awareness.

During the year, SCOPE does different mental health and healthy lifestyle events in the community. Due to COVID-19, all of those events were canceled, but Winters wanted to find a way to unite people in a different way and help relieve the stress of a pandemic.

Winter then heard from runners in the community that the majority of runs had been canceled due to the pandemic. Winter said that SCOPE decided on doing a 5K because it would get people active again.

“Unfortunately because of COVID-19, gyms are closed down, a lot of the parks have been closed down,” she said. “There is very little exercise going on. People are just sitting at home, they are depressed, they are eating, they are not exercising and it’s going to lead to a cycle of unhealthy behavior.”

With a virtual 5K, people would be able to participate without worrying about social distancing because they could run the race on either Dec. 5 or 6 and then submit their time online.

SCOPE planned the run around their #JustTalk campaign which is about mental health and having someone to be able to talk to. It also leads into the national Stomp Out the Stigma campaign.

“No one wants to talk about their mental health, no one feels comfortable to say anything,” Winter said. “A lot of people are getting behind the idea of stop out the stigma and being able to open up to the idea of mental health. We are giving them something to start the conversation.”

The #JustTalk campaign started over the summer in collaboration with Suicide Prevention Coalition. Since then, SCOPE has put up window clings and signs around Socorro. The campaign is targeted at everyone who is struggling with mental health and at people who know someone who is struggling.

Winter said how encouraging people to talk about mental health has been an issue since before the coronavirus, but has now gotten worse because people can no longer see their friends and family.

While #JustTalk is aimed at everyone, Winter wanted to make sure that kids are aware that it is ok to talk. She said how kids don’t like to talk about their mental health because they are worried their parents would think badly about them or their friends would make fun of them.

“We aren’t even that concerned about who you talk to, just talk,” Winter said. “Just get it off your chest — anything that is bothering you, be it substance abuse, alcohol addiction, mental health issues, just straight up stress — anything. It gets the kids to open up and talk.”

When the run was in the planning ages, SCOPE was planning on having a few in-person events throughout the weekend. Winter said they were going to have health booths with mental health resources and information set up at various parks in the county. They were also going to have selfie stations set up. The booths were going to be spread out and up the whole weekend so that the runners could do the run when they wanted and still be socially distant.

Due to the constantly changing health orders and not wanting to put the volunteers or runners at risk, Winter said that SCOPE decided not to do the booths.

The cost of the run was $17 as Winter said they did not want to make the cost the reason why people decided not to do the run. The t-shirts and the postage to mail the goodie bags cost roughly $8 each and then the web host charged $1.50 per participant to sign up.

SCOPE did receive a suicide prevention grant to cover the t-shirts and some of the items in the goodie bags, but ended up having to purchase more due to more participants signing up than they expected.

The goodie bags included resource cards with all of the food and mental health places in Socorro County along with an information card for the New Mexico Crisis Line. SCOPE included a bracelet that on the outside says #JustTalk and has the National Suicide Prevention number on the inside. Local businesses donated chapsticks, pens, keychains and a outlet cell phone cover.

The remainder of the grant money will be used to purchase more mental health resource cards SCOPE is also planning on using it to do more work around Socorro and for the Wellness Program in Magdalena. 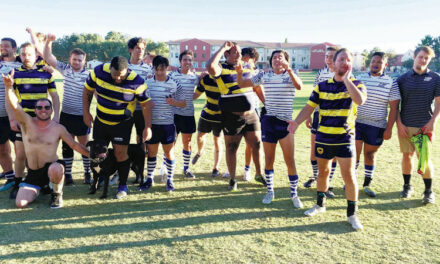 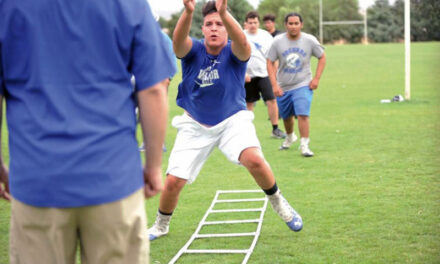 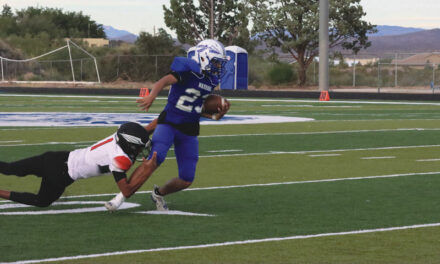 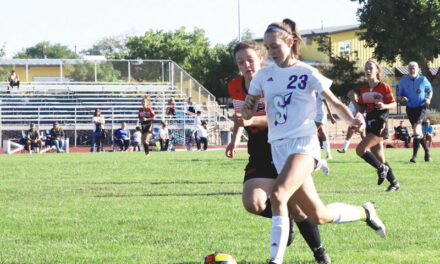